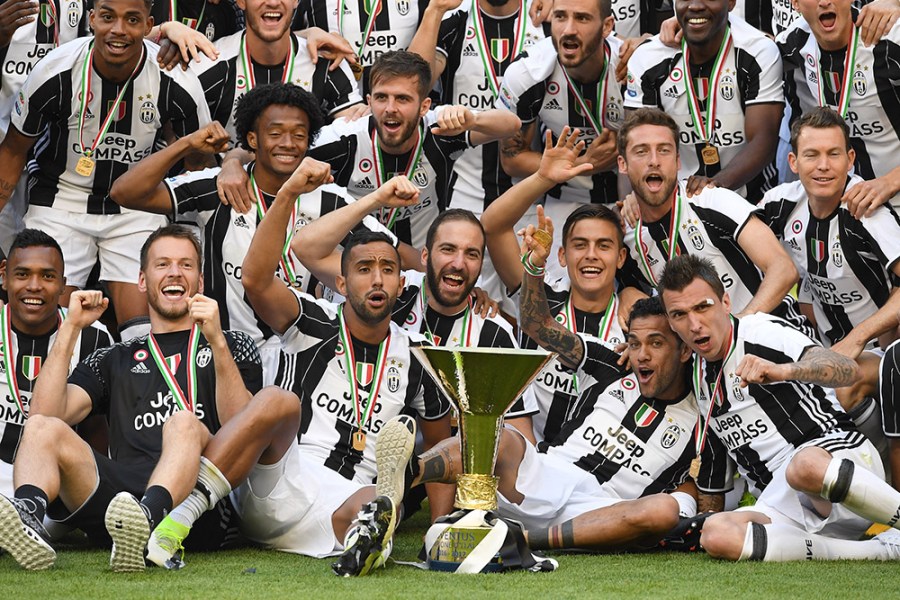 In the end, there was an inevitable sense of predictability not to say anti-climax about the Old Lady’s 33rd Serie A title win on Sunday against Crotone. For most of this season, Juventus have stood up to be counted everytime there was something at stake in a game. So it was on Sunday.
Relegation battlers Crotone were always on a hiding to nothing in this situation where a win would see the Old Lady wrap up the title with the last game of the season still to play next weekend. After only 13 minutes, Juve’s Croat Mario Mandzukic, arguably their player of the season, had put them in front. Before half-time, Argentinian Paulo Dybala, arguably the side’s most skilful player, had made it 2-0 with an imperious, perfectly struck free kick.  So much for that 3-1 defeat by Roma last week…
From that moment on, the game was in full anticlimatic mode with the only real worry being that Juventus might take their foot so far off the accelerator that the relegation battlers would worm their way back into contention. A noisely touchline display of shouting, cajoling and assorted theatrics from Juventus coach Massimiliano Allegri, however, ensured that Juventus did not drop tension levels to any dangerous degree.
When it comes to assessing this sixth consecutive Serie A title win, coach Allegri has to be one of the starting points. His intelligent coaching has ensured that his team remained hungry and ultra competitive all season long. Partly, this was due to the fact that he was able to introduce two new and “hungry” champions such as ex-Napoli Argentinian striker, Gonzalo Higuain, and ex-Roma Bosnian, Miralem Pjanic.
Partly, it was due to a tactical flash of genius when, last January, he abandoned his cautious 3-5-2 system for a more audacious 4-2-3-1 formation which saw the Old Lady line out with all her most talented attacking players – Pjanic behind Caudrado-Dybala-Mandzukic with Higuain on his own up front. Above all, though, Allegri managed to keep his squad “on message” all season long thanks to a mixture of “stick and carrot” as he made the most of the natural pride of a group of players who, clearly, do not much care for losing games.
It was typical of Allegri (and Juventus) that, with the exception of short post-match celebrations, all their talk on Sunday evening was pointed in one direction, namely Cardiff and their Champions League Final clash with Real Madrid. All season long, it it has been the Champions League which has proved to be the Turin giant’s biggest obsession. One clearly gets the impression that both this league title win and their Italian Cup Final win against Lazio last week were merely the “antipasto” prior to their main feast, scheduled for the Millenium Stadium in Cardiff on June 3rd.
Allegri made the point immediately after Sunday’s game, saying: “We’ve got to focus exclusively on Cardiff now. The Champions League is a dream [target] but you have got to go there, convinced that you can win it.”
Two years ago, in that Berlin loss to Barcelona in the final, there was the sense that, at least at the beginning of the game, not everyone in the Juventus squad was convinced that they could do it against the Wunder team of Iniesta, Messi et al. Two years later, you get the impression that this Juventus are not going to be overwhelmed by any reputation, including that of Real and Cristiano Ronaldo.
Perhaps, this time, Juventus bring a potent weapon, previously missing from their armoury, to their latest challenge. It is only obvious to suggest, as we all did last autumn, that if you buy the two best players in the squads of your closest rivals (Higuain and Pjanic), then you have given yourself a monstrous seasonal seasonal start. The thing is that Higuain, in particular, has been decisive not just at the start but all the way through the season.
Bought by Juventus to score important goals and to ensure the side got to the Champions League Final, the talented Argentinian has delivered. Against Fiorentina on the opening day of the season, against his old club Napoli last October, against Roma last December, against Monaco in that Champions League semi-final first leg and in many other games, it was the Argentinian who scored the “heavy” goal which kept his side not just afloat but out in front on those (rare) occasions when not everything was going their way. Last season, Higuain scored a record 36 goals for Napoli but this year his reduced haul of 24 goals for Juventus arguably had a much more dramatic impact.
When we get to Cardiff, will his winning impact make itself felt one more, all important time, perhaps aided by Pjanic?