Who is the best football coach in the world?   Why, Carlo Ancelotti, of course.   And who says so?  Why, none other than his Italian colleague, the former Juventus and Italy coach, Marcello Lippi.

As Italian football shakes itself out of its festive slumbers, ready to restart on Wednesday, Lippi reflected the other day with Gazzetta Dello Sport on the forthcoming year both in relation to himself and to the overall Italian scene.   The first intriguing reflection is that 67-year-old Lippi is not yet ready to throw in the towel.

Many of us wondered if, after his successful three year spell with Chinese champions Guangzhou Evergrande ended in February 2015, the 2006 World Cup winner would opt to call it a day.   Not so, it seems, since Lippi told Gazzetta that he is “not tired of football”, adding that “if an opportunity came my way”, then good.   As he looks forward to the New Year, Lippi argues that the role of the top flight coach has become ever more important, saying:

“People used to argue that, at best, the good coach counted for 20%.   That is not so and it never was for people like Mourinho, Capello, Van Gaal, Lippi and others.   These days, it is the big name players who insist on having a strong, experienced coach in charge.   He is not meant to be a mate, a father figure or a close brother, no, he is a guy who makes sure you win something and thus you get a better contract…”

Even if Man United supporters might have their current reservations about Van Gaal’s inclusion in that particular little list, Lippi has a point.   Lippi will forever be remembered as that architect of Italy’s 2006 World Cup success in Germany but prior to that, of course, he had won five Serie A titles and the 1996 Champions League with Juventus.   He has never made any secret of his strong sense of attachment to the Old Lady and as he assesses the current side, he has plenty of praise for the man currently in the hot seat, Massimiliano Allegri:

“He is very concrete, he is technically and tactically very sound, he can change things around in the course of a game…and he has plenty of courage.  For example, not everyone would have dropped (Spaniard Alvaro) Morata to make way for the anger and drive in (Croat striker) Mario Mandzukic which have been fundamental to the Juventus comeback…”

Lippi does acknowledge, however, that the Old Lady dirtied her bib just a little by losing to FC Seville in their final Champions League Group game, in the process earning themselves an intimidating second round tie with Bayern Munich.  This is a tough draw, he says, adding mischievously: “Mind you, you could see from Guardiola’s face that he wasn’t too happy either with the draw…”

Bayern coach, Pep Guardiola, is obviously a coach and colleague held in the highest of esteem by Lippi.   He says simply that Guardiola “created and coached the best team of all time”, namely his Barcelona.   Curiously, though, if asked to name the best coach on the current scene, Lippi’s choice falls not on Guardiola but rather on his successor at Bayern next season, Carlo Ancelotti. 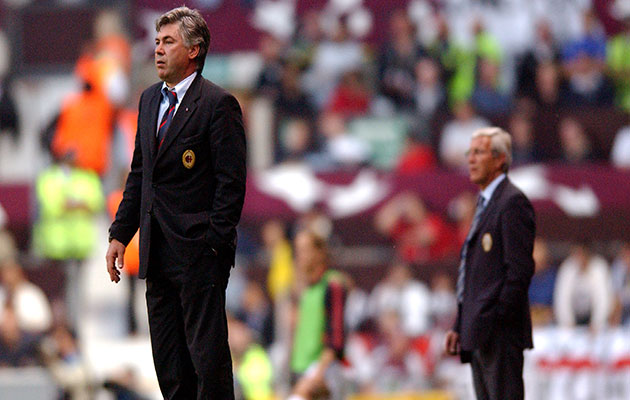 Carlo Ancelotti and Marcello Lippi on the touchline at the 2003 Champions League final.

“There’s no one like him,” said Lippi. “He has won everywhere (Italy, Spain, England and France) and he will win again when he goes to Bayern.   The great thing about Carlo is that you won’t find even one of his players who will have something negative to say about him…”

Closer to home, Lippi argues that current Napoli coach Maurizio Sarri has done a terrific job, saying: “Sarri has belied an old cliché because he has shown that in three months you can win over your players, starting with (Argentine Gonzalo) Higuain…”

Lippi makes no mention of current league leaders, Inter, one of the few top flight sides where his huge skills failed to produce postive results, during a disappointing 1999-2000 season.   Like the rest of us, he will have noticed that Inter, for marketing and sponsorship reasons, chose to spend the winter break in Qatar where the Indonesian-owned Inter lost a friendly, 0-1, against Qatar-owned Paris Saint Germain.

The league leaders, of course, finished the year in a less than ideal manner, losing 2-1 at home to Lazio on the last pre-Christmas day.   Despite that loss, however, coach Roberto Mancini, was sounding very positive when telling Qatar’s 2022 World Cup “Supreme Committee For Delivery”: “I would like to think that we can win the title.   Serie A is tough but now that we are out in front, we want to stay there…”

That clearly remains to be seen.   Right now, it is very tight at the top of Serie A, with just four points covering the top five, namely leaders Inter, Fiorentina,  Napoli, Juventus and Roma, in that order.    An interesting second half of season awaits, starting with a Wednesday fixture list in which all the big names avoid one another with Inter away to Empoli, Fiorentina away to Palermo, Napoli at home to Torino, Juventus at home to Verona and Roma away to Chievo.   Roll on 2016.