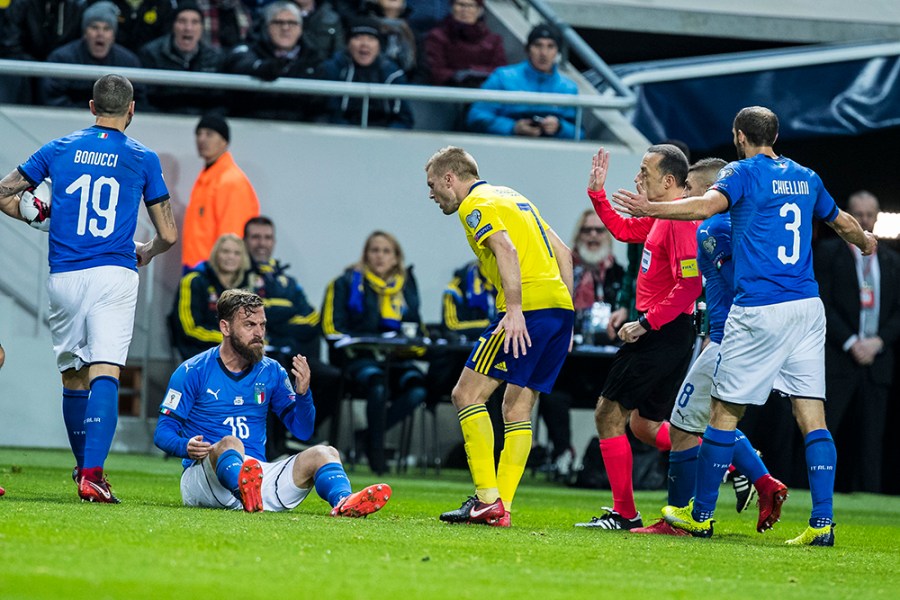 Around here right now, there is a lot of talk along the lines of “edge of the abyss” or “Apocalypse Now”. When Italy take on Sweden in their World Cup play-off, second leg tie at the San Siro in Milan tonight, they will be playing arguably their most important World Cup qualifier since that infamous January in 1958 when little Northern Ireland eliminated them from that year’s World Cup finals in Sweden.

If Italy manage to recover from the bitter disappointment of their 1-0 defeat by Sweden in Stockholm last Friday, international critics will doubtless point to the proverbial Italian ability to wriggle out of a dead-end, just at the very moment when all seems lost. If, in contrast, Sweden manage to eliminate Italy tonight, then Italian football will no longer be at the “edge of the abyss”; no, it will have fallen in, head first.

Were the four-times world champions to fail to qualify for the Russia World Cup next year, that failure would be seen by many as further, definitive proof of the decline of Italian football. In the heat of the moment, that interpretation would be eminently understandable, even if a bit over the top.

All of which is to say that, for coach Giampiero Ventura and Italy, the pressure is on. Nor, at first glance, do the signs look good. Sweden are a solid, organised, hardworking, physical team. They are not, however, world beaters. In times gone by, most Italy teams would have expected to beat them, albeit not without the inevitable difficulties presented by the “robust”, physical Swedish game.

Probably many in Italy would agree, though, with the less than enthusiastic analysis of Friday’s game, offered this weekend by Sandro Pochesi, coach of Serie B side Ternana, who said: “One of our third division teams would have beaten Sweden. We have brought so many foreign players into Italian football that no knows how to get stuck in physically anymore, we have become a team of softies. There was a time when Italy played it rough and won. Now teams play it physical with us and all we do is act the crybaby.”

Pochesi’s less than diplomatic analysis relates to the Italian team’s belief that, to some extent, the Swedes opted for the “physical” approach as evidenced by an opening minute clash between Leonardo Bonucci and Swedish striker, Ola Toivonen, which left the Italian defender with a broken nose.

This may be partially true but arguably the most disappointing aspect of Italy’s performance last Friday was the manner in which the Italians allowed themselves to be literally knocked off their game, spending much too much time, energy and theatrics on complaining about the Swedes. In the process, the Italians got distracted and stopped playing football.

Most unforgivable was the fact that Italian theatrics and protests climaxed at the very moment just after half time when Italy seemed to be in control of the game and when Sweden, after almost an hour of football, were looking very unlikely to score a goal. Italy fell foul of their own theatrics, conceded a poor goal and, in the process, gave themselves a mountain to climb tonight.

However, the football evidence of the game in Stockholm would suggest that climbing this particular mountain is far from impossible. For that to happen though, coach Ventura may have to make vital changes, not so much in terms of selection and tactics as in terms of attitude. The old faithful 3-5-2 proved too cautious, too slow and too defensive for Italy’s own good on Friday night. Italy clearly have to go for this one, have to take risks in this manifestly “do or die” clash.

The actual line-out system will matter less that the attitude. Aided by the imposing figure of the 12th man, the 75,000 plus capacity filled Meazza stadium, Italy have to field their most potent attacking armoury. This means that Napoli’s in-form Lorenzo Insigne could step into a three man attack alongside Andrea Belotti or Ciro Immobile in the central striker position with Antonio Candreva on the other flank. It also means that Roma striker Stephan El Shaarawy, another player very much in form, may well be on the bench tonight, not in the grandstand as on Friday night.

In midfield, too, Ventura is forced to make changes since his first choice playmaker, Marco Verratti, is suspended for this game. This may well open the door for Napoli’s in-form Italo-Brazilian Jorghino whose thoughtful, creative football plays a huge role in the success of the current Napoli side. To play Jorghino would represent a huge gamble both because he has so far played only twice for Italy, both times in friendlies and also because no one can be sure how a De Rossi-Jorghino-Parolo midfield will work out in a game of this importance. Still, the time to gamble is upon us.

As for the Swedes, they are not surprisingly just a little worried about the ability of match referee, Spaniard Mateu Lahox, to keep a hold of the game. Ex-Hamburg and Panathinaikos striker, Marcus Berg, now with UAE club Al Ain, put it this way on Sunday:

“The Italians are always play acting, problem is that they don’t even do it well…We know that we are only a small country and that the participation of more important teams like Italy is always welcomed at World Cup finals. I just hope that the referee is a man of strong personality…”

Italian fans, however, will be hoping that the men “of strong personality” tonight will be Messrs Ventura, Buffon, Bonucci et al. Otherwise, stand by for a nationwide outbreak of wailing and gnashing of teeth, worthy of the fiery furnace.