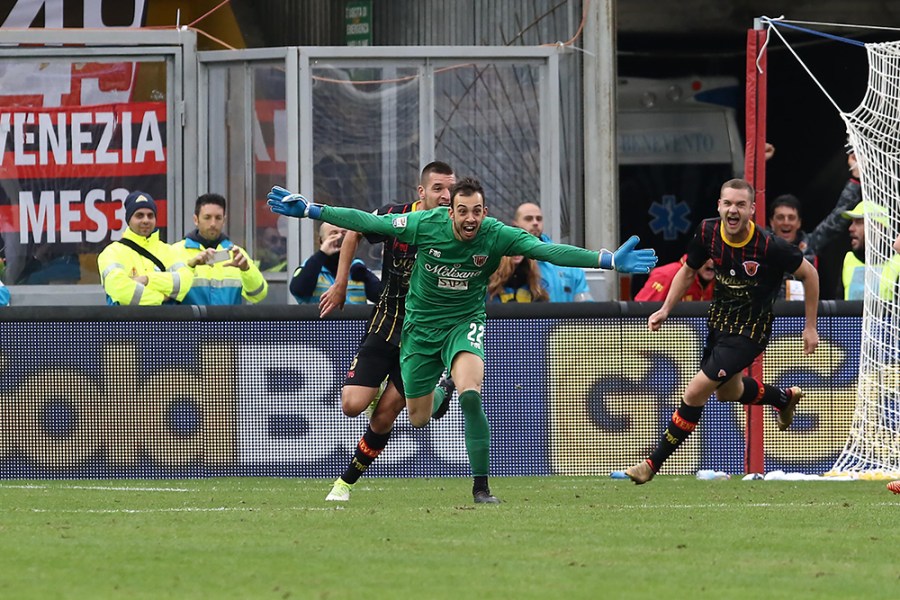 You cannot say that we did not warn you. Asked to explain just how little Benevento, from the Campania region, finds itself in Serie A this season, for the first time ever, critics like your correspondent last summer pointed to the town’s so-called “magical” qualities.

The thing is that, since ancient Roman times, Benevento has been known as the “city of Sorcerers”, the home town of wizards. Some might even argue, with all due respect to then coach Marco Baroni, that it was only thanks to the efforts of wizards and witches that the club unexpectedly made it to Serie A last spring.

Whatever about that promotion, you could be forgiven for arguing that the wizards were hard at work down in Benevento last Sunday. Until then, Benevento’s season had been an unmitigated disaster. Their record read: Played 14, Lost 14, 0 points. And then along came the mighty AC Milan, themselves just a little shaky following last week’s sacking of coach Vincenzo Montella, replaced by 2006 World Cup winner, Rino Gattuso.

When we looked at the fixture list, most of us thought that Gattuso had been gifted an ideal starting place as Milan coach, with an away fixture against Benevento, the club which now holds the Italian all-time record for the worst seasonal start. Surely this feature will get Gattuso off to a good start, no?

Indeed, as we headed into injury time, that was the way it looked. After an admittedly unconvincing performance, Milan looked ready to wrap up a vital 2-1 away victory. Buoyed by a goal just after half-time and not resigned despite a second Milan goal five minutes later, Benevento poured forward in the final minutes against a defensive Milan, down to ten men in the wake of the 75th minute sending-off of defender, Alessio Romagnoli.

As the stop watch hit 95 minutes, Benevento were awarded a free-kick out on the left, close to the penalty area. From the Benevento bench, someone shouted at goalkeeper Alberto Brignoli to “get up there” for what would probably be Benevento’s last chance.

This is a scene that we witness week after week. In a final, all or nothing dramatic gesture, the goalkeeper rushes up to the other end for the injury-time corner kick that might just save the day. Gigi Buffon, in the last seconds of Italy’s World Cup play-off elimination by Sweden last month, is just the latest in a long line of keepers to hurl themselves into the attacking fray.

In Buffon’s case, as in most other cases, the gesture was totally in vain; often the keeper gets nowhere near the cross. The difference, though, is that Buffon and friends do not have the witches and wizards on their side. Brignoli took a deep breath, shut his eyes and pulled off what he subsequently called “a goalkeeper’s jump” to score an historic goal that gave Benevento a 2-2 draw and their first point of the season.

For 26-year-old Brignoli, making only his ninth appearance in Serie A after a career until now with lower division sides such as Montechiari, Lumezzane and Ternana, this was an unexpected joy, “one that I will one day proudly tell to my grandchildren”. Even at Benevento, Brignoli did not start this season as first-choice goalkeeper, having replaced Slovenian Vid Belec on the eighth day of the season.

The man who made that decision, then coach Marci Baroni, was not on the bench on Sunday, having been replaced by Roberto De Zerbi just five weeks back. A journeyman player whose playing career touched many clubs and included two Romanian titles with CFR 1907 Cluj, De Zerbi started off as a youth team player at guess where – why, Milan, of course.

De Zerbi and Benevento, may well have put yet another spanner in the Milan works as the side which reportedly spent more than €250 million on new players this summer continues to misfire in Serie A. Milan now lie joint 7th in Serie A after a draw about which Gattuso said that “a knife in the stomach would have been better than that goal”.

Worse still for the Milan fans is that the consideration that at the end of a significant weekend, it is their city cousins, Internazionale, who now sit atop Serie A following on their 5-0 destruction job of Chievo and following, above all, that 1-0 Juventus win over Napoli on Friday night, knocking the Naples club off the top. (We did suggest that it was a little premature to be writing off the “Old Lady”).

Inter, too, look like a more serious side, week after week. With 18 points more by comparison with the same date last season, having conceded 11 fewer goals and scored 11 more, and all with a largely unchanged squad, you would have to conclude that this season’s new coach, Luciano Spalletti, must be doing something right.

The top of Serie A, too, is suddenly looking very competitive, led by Inter on 39 points followed by Napoli on 38, Juventus on 37 and Roma on 34 (but with a game in hand). After the trauma of Italy’s World Cup elimination, are the fans about to be compensated with the most closely contested Serie A title contest in years?

That remains to be seen. These are still early days. What is certain, however, is that last weekend’s results have set us up for a mouth-watering “derby d’Italia” in Turin next Saturday night between champions Juventus and leaders Inter. Having last weekend struck a major dent in Napoli’s ambitions, who is to say that the Old Lady will not repeat the trick against Inter?

Internazionale, however, go into this game with at least one advantage, namely no midweek European fixture. Juventus, in contrast, travel to Athens for an away Champions League tie against Olympiakos on Tuesday night, knowing that to be certain of their place in the second round, they need to win.

Perhaps, the most fascinating, if obvious sub-plot to this great Juve-Inter drama concerns the two men leading the respective attacks, Argentine rivals Mauro Icardi and Gonzalo Higuain. Both men are in stunning form as evidenced both by Icardi’s 16th goal of the season against Chievo and, arguably even more, by Higuain’s monstrous 13th minute match-winner against Napoli. Stand by for a big night at the Allianz Stadium and watch out too for any signs of broom sticks or associated sorcery.