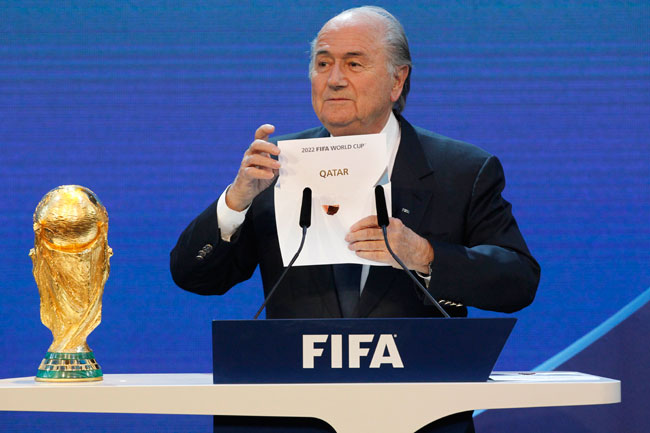 Sepp Blatter names Qatar as the host of the 2022 World Cup.

One of the UK’s leading trade unions has branded Qatar’s new welfare charter as ‘totally inadequate’ and said that FIFA must demand changes to protect the rights of workers building the 2022 World Cup venues.

GMB has called for the European parliament subcommittee on human rights to state that if Qatar does not change laws that deny workers their fundamental rights then FIFA should withdraw the 2022 finals from Qatar.

The subcommittee hearing on migrant workers in Qatar takes place in Brussels on Thursday (13 February). The GMB said that the Qatar welfare charter, made public yesterday, is totally inadequate and falls far short of what is required.

Qatar’s committee responsible for delivering the 2022 World Cup will present the welfare charter to FIFA today as a blueprint for the improvement of working conditions in Qatar. FIFA will the discuss the charter at the European hearing tomorrow.

“Forced labour continues in Qatar today with no workers’ rights. No migrant worker can be protected by any safety standard unless they have the right to collectively speak out about wages and conditions at work.”

The kafala visa sponsorship system ties workers to their employers, as they cannot leave the country or move to another employer without permission.

No changes to this system has been made or recommended to the Qatars laws that deny workers their fundamental rights, according to the unions.

There has also been criticism of the scope of the new welfare charter which covers only the 2022 World Cup venues and not the wider infrastructure underpinning the finals.

According to the Guardian, just 38 workers, of the hundreds of thousands engaged on infrastructure projects, are currently working specifically on World Cup stadiums.

Qatari authorities have been heavily criticised by human rights groups and trade unions since a Guardian investigation revealed the scale of the abuse of migrant workers.