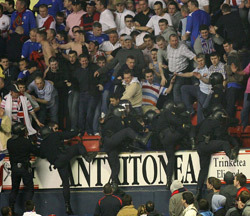 Rangers will complain to UEFA over what the club described ‘heavy-handed policing’ in their UEFA Cup defeat by Osasuna at Pamplona.

Spanish riot police waded into Rangers’ supporters during Wednesday’s game, which ended with a 1-0 defeat and elimination from the competition for the Scottish side.

Rangers will “officially consult UEFA to complain” about the lack of segregation and the police tactics, the club said.

Rangers chief executive Martin Bain told their web site: “We are really disappointed that despite all the preparatory work that was done by ourselves and the British Ambassador and, the fact there was a special security delegate appointed to this game, there was still a lack of segregation in this ground.

“We witnessed a letter from UEFA to Osasuna demanding that they put segregation in the ground.”

“There is no doubt about it that there is a small element that attached itself to our support, but the vast majority of Rangers fans were intimidated by heavy-handed police.

“We have spoken with the UEFA delegate at the game and he agrees with us that things were not right in the ground and the British Ambassador has also made representations to UEFA as well.”

Rangers Spanish forward Nacho Novo has revealed his disgrace at the way Rangers fans were treate.

“I’ve been told what happened and it sounds disgraceful,” he said.

“The police in Spain do have a reputation for being too aggressive with foreign supporters and that seems to have happened again tonight.

“I feel so sorry for our fans that they have been involved in something like this.

“Uefa need to do something about this and I hope they will. But the most important thing is that our fans are safe.”