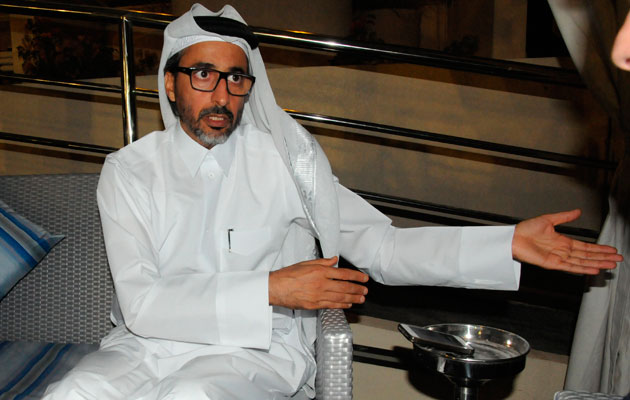 More damning and repulsive news from that sink of Middle Eastern iniquity.

Qatar: still designated as hosts to the 2020 World Cup. Now it is reported that besides the callously exploited Nepalese workers who die in their scores working on the stadia being built for that ill augured tournament, their passports confiscated so they cannot escape, a despicable deal with North Korea has been made.

North Korea, a brutal dictatorship, a parody of Communism at its worst which could hardly on the face of it be a greater contrast with Qatar; a parody of capitalism. We now learn that North Korea has sent workers to build stadia in Qatar, all but an infinitesimal fraction of their pay going back to Pyong Yang.

A modern form of slavery though pitifully they are alleged to be a happier working for a pittance in Qatar than slaving and perhaps starving in North Korea.

How reassuring it is that at last Michel Platini, that great footballer and disastrous administrator, proponent of Qatar’s World Cup claims, even to the extent – as supposed guardian of UEFA club’s interests – of supporting the idea of playing that World Cup in the European winter – has at least seen glimmers of the light.

Now he grudgingly says that there should be a fresh vote on the venue of the 2020 World Cup, “if there is some evidence of corruption.”

Some evidence! What planet does he live on?

As one who has admired him so much as a footballer, I am prepared to believe that he has been no more than a misguided fool. Meanwhile wrecking the European Championship finals.

Brendan Rodger’s mistaken gamble in putting out a gloried reserve team in the Bernabeu has almost predictably backfired.

The obvious intent was to save the bigger guns for the ensuing match at home to Chelsea, whom, win lose or draw, there wasn’t the slightest chance of challenging them in the Premiership.

In the event, Liverpool could well have got a draw. Three times Chelsea’s centre back Gary Cahill figured in controversial incidents. Once when his attempt was carried just across his line by the home keeper Simon Mignolet. Twice when he handled and got away with it in his own penalty area.

No, I don’t think Rodgers did the right thing in Madrid. If football nowadays is hardly as Danny Blanchflower, that supreme skipper, once said, about glory, Liverpool do have a glorious tradition in the European Cup, and it was surely betrayed by the induced passivity of their team in Madrid.

Some Liverpool supporters seem to have come out in favour of Rodgers’ negative policy, but I cannot believe he will ever be forgiven by the majority.

Defeat aklways looked likely, but it was surely so much better to go down with a bang not a whimper.

Arsenal’s 2-1 defeat at Swansea, following close on the ineptitude of their 3-3 home draw against Anderlecht, has caused even the usually Panglossian Arsene Wenger to throw in the towel  as far as the Premier League is concerned.

Those last two results make it more surprising than ever that the Gunners should have given him a new three year contract after the routs at Anfield, Stamford Bridge and Man City last season.

A splendid and innovative pioneer when he took over at Arsenal in 1996, it seems all too plain that Wenger has run out of road.

Per Mertesack, the big German centre back has readily accepted blame for himself and the team – some criticise his failure to impose himself as captain – but Wenger can hardly be exculpated, whatever the dynamic excellence of Sanchez, for the team’s obsolescent tactics, the lack of wing play which Mertesacker stresses and the failure to provide decent cover for the injured Laurent Koscielny.

Snatching their chestnuts out of the fire in that first flattering victory in Brussels, Arsenal (even if the first Anderlecht goal was probably offside, wilted dismally against the Belgians), and allowed themselves to be overtaken in Swansea.

Would Gomis have headed that in over against the likes of Tony Adams, Martin Keown and Steve – now the defensive coach – Bould?

Sir “Chips” Kewick the present chairman of the board announced at a deeply disturbing shareholders’ meeting that Wenger has a wholly free hand. Should he?

One mere trophy in ten years, and that so hard won against modest Hull at Wembley, is a meagre return, for a club of Arsenal’s majestic status.

For all the multiple millions poured into the Greed Is Good League, its claims to paramouncy seem dim to me.

If Chelsea are running away with the title, what does that say about the other faint pursuers? Chelsea, who in the European Cup couldn’t even beat Schalke, anything but formidable in the Bundesliga, at home and, to their shame, little Maribor, away.

Manchester City under Pellegrini for all their colossal expenditure and coming to bits. Humiliated at home in Europe by CSKA Moscow, so lucky to survive at QPR.

Could it really be that money isn’t quite everything?