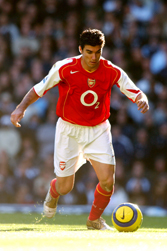 “My dream of wearing the Madrid shirt is growing ever nearer,” he said. “It’s hard to stay calm at a time like this.

“Madrid’s offer cannot be turned down. Now all that is left is for the offer also to be good for Arsenal.”

Real Madrid are expected to send a delegation to Arsenal in the next 48 hours with a “final offer”.

Reyes, 22, did not play in Arsenal’s Champions League win over Dinamo Zagreb and not being cup-tied may help facilitate the switch.

Reyes paid tribute to Gunners boss Arsene Wenger for leaving him out of last week’s game.

“If I’d played in Zagreb it would have been very complicated. The boss was good,” the Spaniard told The Sun newspaper.

“If Arsenal sell and Real buy then it was what he had to do.

“Wenger has acted like he exactly is – a gentleman. I want to thank him publicly for everything he is doing for me.”

The foward has made no secret of his desire to return to Spain, despite signing a conteract extension with Arsenal last year that commits him to the club until 2011.

“The coach knows that I have had problems in adapting to the lifestyle in England,” he added.

“If agreement isn’t reached, it will be bad for Arsenal and for me.”

Arsenal want £16m for Reyes, who joined them in January 2004 from Seville, although Julio Baptista could move to Arsenal as part of the deal.