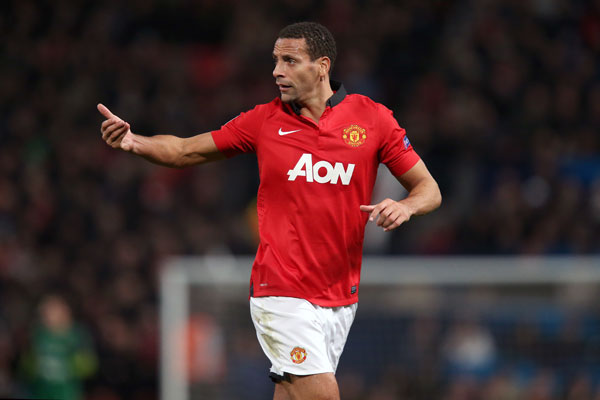 Rio Ferdinand has described Manchester United’s season as “embarrassing”, with the veteran defender claiming he is reluctant to leave his own house.

Just pretend it’s Edin Dzeko, Rio, and you’ll have no problem getting away from it.

With some unhappy United fans planning to hire a plane to fly over Old Trafford during Saturday’s game with Aston Villa, to demand the removal of David Moyes, Ferdinand’s comments are unlikely to be construed as public demonstration of support for the beleaguered United boss.

“It’s embarrassing – it becomes a personal insult. I don’t want to go out when the game is finished and you even stop watching TV,” Ferdinand told BT Sport.

The horror, the horror…

“We’ve got no divine right, don’t get me wrong, you’ve got to earn that right. And this season we simply haven’t done that.”

Ferdinand’s rant is as predictable as it is self-serving and comes from a person who has had a glimpse of a life beyond Manchester United, but doesn’t like what he sees. One can only assume that he sees a role for himself at Old Trafford in a post-Moyes era.

Such levels of delusion are not uncommon when a player reaches the latter stages of an illustrious sporting career. Usually, though, they coincide with a brief but tantalising reminder of past glories. However, this has not been the case with Ferdinand, whose widely admired skills have simply evaporated over the last few years.

Moyes convinced he has fans backing

But, when it comes to self-delusion, Ferdinand may have just been eclipsed by Moyes.

Amid talk of the aforementioned fly-past, the United manager insists he retains the support of the majority of Manchester United fans.

“They were really supportive and every time I have been to Old Trafford they have been great. I am seeing a lot different from what a lot of people are saying but I understand that results matter.”

However, surely Moyes must realise that even his harshest critics are unlikely to vent their feelings about his management shortcomings whilst attending a charity event organised by one of his players.

When asked about the anticipated fly-past protest, Moyes said: “I have heard of it and what they are saying about it, but this is something which is a long journey here, this is only the start of the journey. People can do that. They are entitled to do that.”

Sadly, for Moyes, the journey most people will be talking about from Saturday lunchtime onwards, is a short aerial trip around Old Trafford

When asked if he retained the support of the playing staff, Moyes said: “Definitely. I have no reason to suggest anything else. We work together and have a great relationship.”