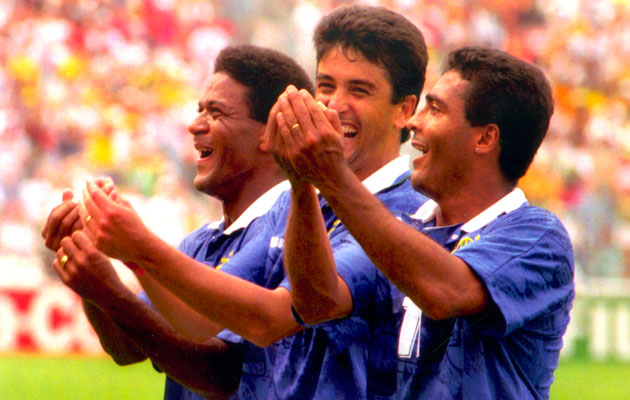 Romario and Bebeto were both elected to parliament in elections this weekend.

Romario – an existing deputy in the lower house – was elected Senator for Rio de Janeiro, with a whopping 63 per cent of the vote. The 48-year-old received more than 4.5 million votes in Rio de Janeiro, the most ever in the state. Former Rio mayor Cesar Maia, his closest contender polled 20 percent.

Bebeto, his striking partner when Brazil won the 1994 World Cup, was re-elected as a state deputy.

Andres Sanchez, the former president of Sao Paulo-based football club Corinthians, was elected to the lower house for the Workers’ Party.

Romario was elected to the Chamber of Deputies on the Brazilian Socialist Party ticket, and frequently spoke out against the World Cup being held in Brazil in 2014, telling Globo.com the tournament was ‘immersed in corruption’.

He has a daughter with a disability, and one of his main aims was to improve conditions for the disabled.

The 48-year-old World Cup winner said he was proud to have “dribbled past poverty” to make history as a former slum resident who made it to the senate.

Bebeto is a sitting member of the legislative assembly’s Special Committee Promoting the Legacy of the Sporting Events of 2014 and 2016.

He, along with former Brazil striker, Ronaldo, was on the organising committee of the 2014 World Cup and was involved in some testy exchanges with his former team-mate.

“My relationship with Romario is that he’ll be my friend for life, forever. It’s just that he has his ideas, and I have mine,” he said.

With the Rio Olympics due to take place in less than two years time, the pair look set to test that friendship even further.