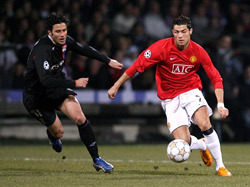 Has Wigan’s injury-time equaliser against Chelsea gifted the Premier League title to Man Utd? It looks that way, click here for all the latest outright betting.

Cristiano Ronaldo admits he is getting fed up with the speculation linking him with a move away from Old Trafford, and insisted he is ‘totally happy’ at Manchester United.

Reports have again claimed that Real Madrid are preparing a bid to sign the Portuguese winger, with a view to striking a deal in the summer of 2009.

“I just don’t care what the whole world seems to want to say about me or speculate about my future,” Ronaldo told The Sun.

“I’ve said it a thousand times and, by now, people should realise…I’m totally happy at United.

“I’m in the form of my life and I’m having the season of my career so far. So it makes me mad sometimes to read some of the things which are supposed to be related to my future.

“I get angry, but I’m trying to accept it’s a waste of energy to be furious because it is not worth it.

“It’s not by chance I’ve ended up at United. I always showed that I had the basic talent and commitment to become a professional player.

“Then my development here has been aided by the support and the correct environment for my talent to develop. There is an attitude of hard work here that I need and like.

“This season is massively demanding on all fronts, personally, for United and for Portugal.

“So what I’m trying to do is set everything else aside and be ready to give my utmost in every match from now until the end of United’s season and then into the European Championships with Portugal.

“If I’m performing at the best level of my life, then it’s not by fluke. Far from it – I’ve worked damn hard to try and achieve exactly that.

“I’m pushing myself mentally and physically. I’m working constantly to better myself – it’s for those reasons alone, and not by luck, that the results are coming and the goals are flowing.”

Has Wigan’s injury-time equaliser against Chelsea gifted the Premier League title to Man Utd? It looks that way, click here for all the latest outright betting.