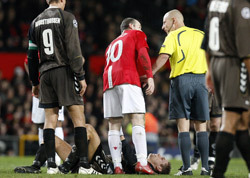 You have to go back sixteen head-to-heads between Spurs and Man Utd to find the last time the Londoners won. See all the BestPrice betting here.

Manchester United face the possibility of playing their Round of 16 Champions League tie without forward Wayne Rooney, after the striker was criticised for his tackle on AaB’s Kasper Risgard in Wednesday night’s encounter.

Risgard claims the incident, which went unpunished by the referee, left him physically marked and also alleged that Rooney apologised after the match.

“I do not think the referee saw it. Anywhere else but this place it would have been a red card,” said Risgard. “I have some big marks and I do not think it looks good on television.

“There was also another incident with Rooney where he threw an arm and hurt one of our players. But these challenges happen in football and he did come and apologise to me after the game.”

“He was jumping at my chest,” he said. “Anywhere else but here [Old Trafford] and it would have been a red card.”

If UEFA choose to take action the England international could be given a suspension which would come into force when the knockout rounds begin at the end of February.

“It is not good for a fantastic footballer,” he said.

“You have to keep your head and stay calm in situations like that… but that man was a little bit frustrated.

“I was not sure during the game and I have not seen the pictures, so I cannot be 100% sure. But some of my people have seen it and said it was.”

United manager Sir Alex Ferguson said he did not see the Risgard incident.

You have to go back sixteen head-to-heads between Spurs and Man Utd to find the last time the Londoners won. See all the BestPrice betting here.