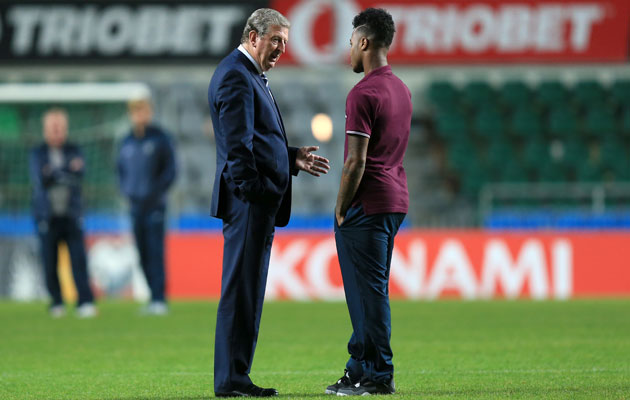 England boss Roy Hodgson has risked reigniting the row with Brendan Rodgers over the Liverpool manager’s claim that some players need a two-day recovery period after matches.

Liverpool’s 19-year-old forward Sterling complained of tiredness and asked to “sit out” the Euro 2016 qualifying victory in Estonia on Sunday. He did eventually come off the bench in the second half to play a part in England’s 1-0 win.

“Raheem might say it is something that is becoming ingrained in him and that he felt the need to talk about being tired more than normal,” said Hodgson.

Rodgers was angry when Daniel Sturridge returned from international duty in September with a thigh injury, with the Reds boss insisting he needed an additional day to recover.

“I think clubs work differently at times to international teams,” said Rodgers at the time. “It’s more the recovery strategy. When we look at our players here we look at them individually in terms of what their needs are.

“Fast players would have a second day recovery while other players can work on that day.”

With regard to Sterling, a sceptical Hodgson suggested that Liverpool should also share the responsibility for resting the player.

“He (Sterling) said, ‘I’m feeling tired, I’d rather sit this one out’,” Hodgson, a former Liverpool manager, told BBC Radio.

“Brendan has been talking about the pressures Raheem has been under and the fatigue that has been setting in so I’m sure he will be dealing with Raheem over the next month as he sees fit,” he said.

“It’s unfair if all the expectations to give the player a little bit of a break fall on me.

“He broke into the Liverpool team, had a fantastic season and then went to the World Cup. He is only a 19-year-old. It is not as simple as the training you are having may be taking a bit of juice from your legs.

“There is an awful lot going on in your head as well, so perhaps it is quite simply that the season has not started as well for Liverpool, and he is in the spotlight for England and Liverpool. Maybe that has had some effect. I don’t know. It’s a theory.

“Having Sterling up your sleeve can be a very, very important factor. There’s nothing wrong with him. I’m sure when he goes back to Liverpool he’ll be fine.”

Sterling played only the first half in England’s 5-0 win over San Marino at Wembley on Thursday before being substituted.

The teenager faced a backlash in the media and from England fans on Monday morning for his reluctance to play against Estonia on Sunday.

The unfortunate Sterling, who appears to have been caught in the middle of a row between the respective managers, took to Twitter to explain his position.

Now listening too.. Excuse me for being human🎵 omw home