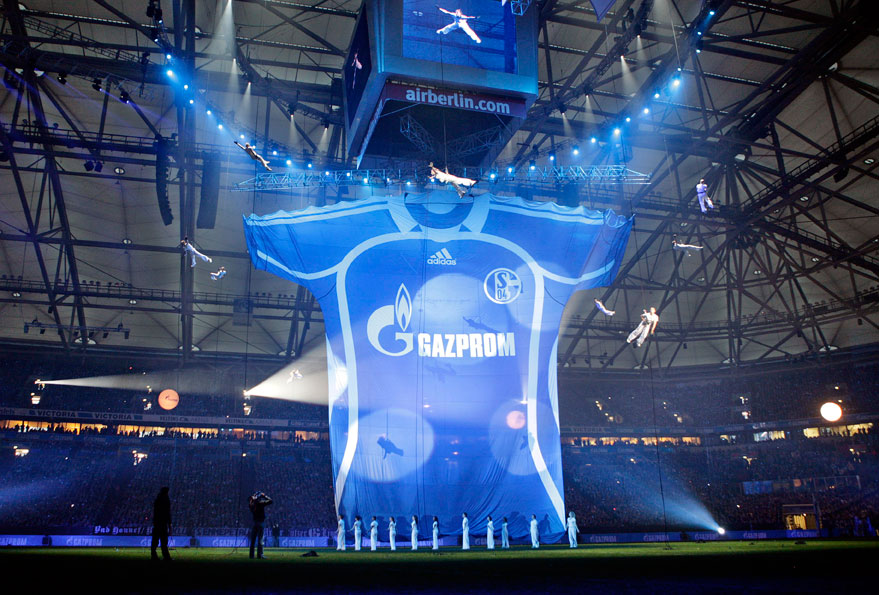 Schalke fans have sent an open letter to the club’s honorary council expressing concern over links with Russian President Vladimir Putin amid the Ukraine crisis.

The Russian government has a majority stake in the gas company Gazprom, which has sponsored Schalke since January 2007. It is the same company, which supplies much of Ukraine’s gas and, at the height of the current crisis, threatened to raise prices for the country.

Moreover, Schalke chairman Clemens Toennies met up with Putin during the recent Winter Olympics in Sochi and claimed that the Russian leader was a Schalke fan. No doubt, Putin, the consummate politician, has assured many prominent businessmen that he shared their sporting affiliations. It was unlikely, when meeting the Schalke chairman, that Putin would turn up wearing a Borussia Dortmund strip.

Toennies told Sport Bild at the end of last month: “I am in talks with Putin. He wishes to meet the Schalke team [in Russia].”

Probably seemed a good idea at the time. So long as one turned one’s back on Russia’s human rights record in recent years.

Still, it could be worse, far worse, there was a time when Adolph Hitler was assumed to be a Schalke fan.

Schalke eventually removed that stigma and now supporters’ fanzine “Schalker Markt” has now published an open letter urging the Bundesliga side’s bord not to offer support to the Putin regime.

The letter read: “Mr Tonnies was seen in the press talking with Vladimir Putin, the President of the Russian Federation. In those reports, it was claimed that he wants to receive a visit from the players of FC Schalke 04.

“We request that you do not grant him this audience and ensure that the club FC Schalke 04 distances itself from Vladimir Putin in public.

“FC Schalke 04 is a club with democratic foundations and the freedom of expression is very precious. We should not function as the lapdogs of an autocrat and ennoble him with a visit. This is especially pertinent given the current political situation in the Ukraine, as Vladimir Putin has grossly infringed on the Ukraine’s sovereignty.”

Toennies insisted there was no connection between the Ukraine crisis and the club’s relationship with the Russian regime.

He told local newspaper Ruhr Nachrichten: “The one thing has nothing to do with the other. One thing is a political problem, the other is an economic relationship, just like many others between Russian and German companies.”