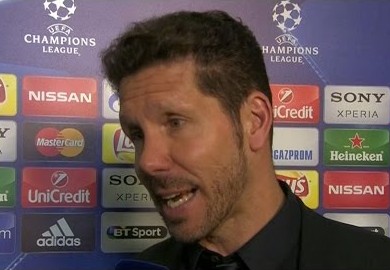 Diego Simeone said that he was proud in the way Atletico Madrid have navigated against Europe’s best after they beat Bayern Munich last night on away goals to reach their second Champions League final in two years.

“I really have to say we played against the best team I have faced in my whole career. It was unbelievable how they played,” said Simeone.

“It’s unbelievable what we have achieved.

“It was great to see my team play with such intensity. When Bayern missed their penalty, we had a good chat in the half-time break and we coped with the pressure they put on us in the second half.

“We achieved our goal, we have seen that we are a very strong team, but we were really good defensively.”

Simeone also praised both side’s goalkeepers – both of whom made vital penalty saves during the match.

“They were two great saves by the goalies, I have to say how difficult it is to cope with this situation at Bayern, playing away from home,

“We have played against two of the three best teams in Europe. We’ve knocked them out, and I’m very proud of that,” added Simeone.