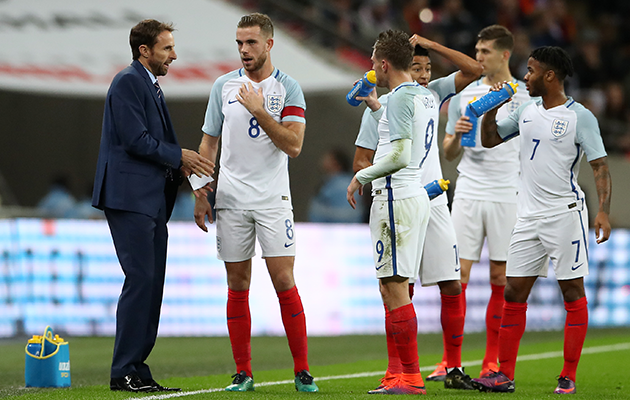 Gareth Southgate believes he has done well in his four-match caretaker spell in charge of England and argued he can handle the pressure of leading the national team.

The interim coach was speaking after England had squandered a two-goal lead in the closing minutes of Tuesday’s 2-2 draw with Spain. Despite conceding those two late goals the performance was easily the most encouraging of Southgate’s tenure.

Southgate, who will return to coach the Under-21 side if he is not appointed, has made it clear privately he would like to continue working with the full national team.

“I’ve not learned anything about myself but I’ve learned a lot about the role and relished the challenge,” he said. “I’ve proved I can manage big matches, that I can tactically – with the help of my staff – prepare a team to play against a top side and give them a tough test. I’ve proved I can handle big occasions.

“I feel every situation I’ve been through, and many have been complex and potential powder kegs, we’ve coped with very well. And I’m pleased with how we’ve coped with it all really. More than that, we’ve built some important stability for the group of players and the team. It’s been a brilliant experience for me. I’ve thoroughly enjoyed working with the players and can see the potential of the group. I took over at a moment of instability for everybody, and we’ve brought stability back and built a platform for the team.

“In terms of the remit, we’ve fulfilled that. It’s an exciting group of players. They’ve got a lot of potential but there’s a long way to go before we can be considered a top team. I’m proud to have led the country for a couple of really important games and experienced what that feels like. We’ve got a European Under-21 Championship next summer and the draw is being made next month, so I need to know where I’m going to park my car for the next few weeks.”

Southgate was encouraged by his team’s display against Spain, which saw England look the more dangerous team for all bar the last five minutes.

“I definitely took encouragement,” he said. “The players, over the period of the four matches, couldn’t have given any more. I’m really pleased with them, especially the way we were tonight. We had long discussions before the game about our approach, wanting to be a front-foot team pressing high. If we were going to be defeated it was going to be being positive and brave without the ball. At times we did that well.

“That comes with a price as the game goes on. At times we kept the ball well and were certainly a threat in transition and counter-attack but maybe in the second half we weren’t able to keep it quite enough. You pay the price. We were fatiguing in the last 20 minutes, and they are a top side. It feels like a defeat for the players but I couldn’t be prouder of their efforts. It was a healthy, positive performance. Maybe not winning will be better for us in the long run, knowing what we have to do at this level.

“Without doubt, the longer you work with any team, with any group, you have the chance to embed more ideas, review each game and learn from it. The players are bullish about how they want to play. They have the potential to go and do that longer term. They now know the benchmark. We made changes [on the pitch]ourselves as well, and maybe lost a bit of cohesion towards the end. But what a brilliant experience for all of them. It should start to build belief in them as a group.”