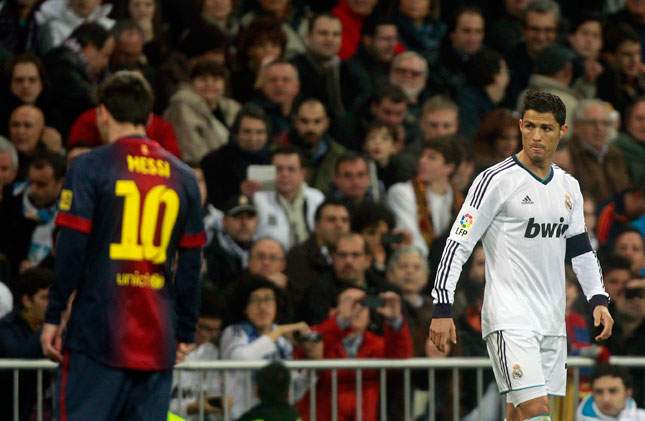 Barcelona and Real Madrid may see their income curbed if the Spanish government has their way.

Real Madrid and Barcelona’s television revenue, which goes a long way towards making them the two richest clubs in the world, will be limited under a new Spanish law.

The teams, with combined annual income of 1 billion euros, won’t be able to receive more than four times as much broadcast income as the smallest of the 20 clubs in La Liga under the legislation, league president Javier Tebas said in an e-mail to Blomberg today.

Real and Barcelona currently earn about 6.5 times as much as the smallest team, Tebas said.

The government is seeking to redress the balance after Real or Barcelona won the last nine Spanish league titles and had an advantage of 30 points over third place in 2012. Atletico Madrid are level on points with them at the top the standings after 23 of 38 games this season – although the success of Diego Simeone’s side has been something of an outlier in the context of the recent dominance by Barcelona and Real Madrid.

Real and Barcelona’s broadcast income will remain at about 150 million euros each for “a few years” under the new law as other clubs catch up, Atletico Madrid Chief Executive Officer Miguel Angel Gil said in a phone interview.

Italy introduced similar legislation for the Serie A championship recently in a bid to make the league more competitive, Gil said.

The English Premier League has enjoyed a more equal distribution of TV money since its foundation in 1992. Champions Manchester United, who received the biggest slice of the pie last season, received just 1.5 times what lowest-earning Queens Park Rangers got.