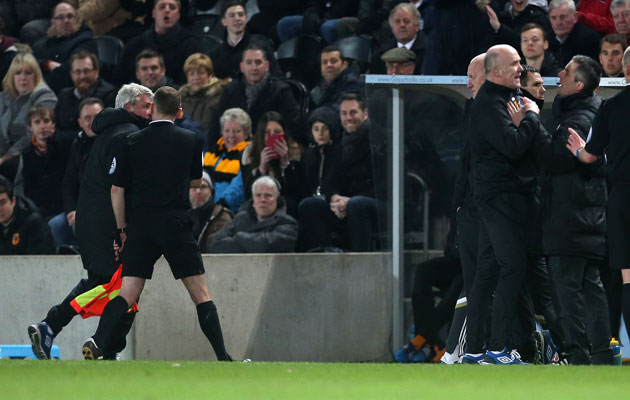 Hull City manager Steve Bruce and his Sunderland counterpart, Gus Poyet, have played down the confrontation that resulted in the Poyet being sent off during last night’s Premier League encounter at the KC Stadioum.

The rival managers clashed after Poyet was sent to the stands in the first half for reacting to Jack Rodwell’s caution for diving by kicking a container of water bottles.

The Uruguayan appeared to hold Bruce responsible for the decision and angrily made his way towards his Hull City counterpart. After an angry exchange of words and gestures – the Tigers boss lunged towards Poyet before being restrained by assistant referee Stuart Burt.

The expression, ‘two bald me fighting over a comb’ springs to mind.

Bruce admitted he had behaved like a “raging idiot, while Poyet declared himself “old fashioned” and preferred to leave the matter on the pitch.

The pair shook hands afterwards, but neither was prepared to give ground on the origins of the spat. Bruce, at least, showed a modicum of regret for acting like an inebriated teenager on a Magaluf stag night.

“We all do stupid things and we will wake up to stupid headlines. We’ll both regret it in the morning, but we get on with our lives,” said Bruce.

“These things happen in the heat of the moment, grown men acting like a couple of children.

“What he said will stay between me and him…it’s up to Gus to reveal what he said but I don’t think he will.

“It wasn’t very pleasant, like ‘have a nice evening Steve’. But I’m not going to reveal it to sell your newspapers.

“The critical thing was that Gus has seen it differently about Jack Rodwell diving to gain advantage. The referee got it right, but I think by his reaction Gus saw it the other way.”

Bruce also thanked Burt for holding him back when he lost his temper.

“I thanked him, I’ll probably have to buy him a beer too,” he said.

“A big heavyweight like me and he was a lightweight to be fair to him. He was exhausted trying to keep hold of me.”

Asked to offer his version of events, Poyet refused.

“No, because I am old-fashioned,” he said. “What happened stays on the pitch.

“I have to convince the officials not to put any buckets of drinks around me. I have no regrets whatsoever. If that is a bad image for football I am sorry but I don’t think it’s something to worry about.

“I was not happy with the decision of McShane. He was diving like he was in a theatre, dancing, ballet and then he got a free-kick for Hull.

“And then Jack was diving and got a yellow card and free-kick against him. So give me one, you cannot get both against you.

“McShane, in the first half, jumped with both feet and went down like he had been shot, but he won a free-kick. I was just asking for the same treatment, simple as that.”