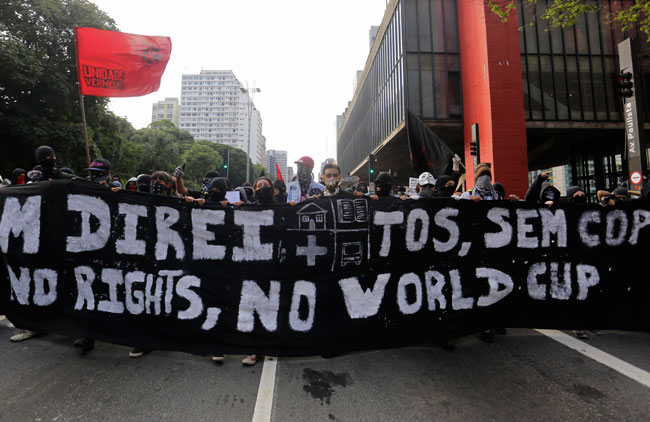 The number of Brazilians who favour hosting the World Cup has fallen to an all-time low just four months before kick-off.

The survey by local polling organisation Datafolha showed that only 52 percent of Brazilians supported hosting the World Cup, down from a high of 79 percent in November 2008, a year after Brazil was chosen as the venue for football’s showpiece event.

Support for the event has waned since massive demonstrations broke out during last year’s Confederations Cup, a dress rehearsal for this summer’s finals. Millions marched in protest against poor public services and the high cost of building stadiums for the World Cup.

The survey showed that 38 percent of Brazilians were against hosting the Cup, up from 10 percent in 2008.

The survey supported the findings of another poll last week that showed most Brazilians would not oppose the country staging the finals if a decision had to be made today.

That poll, conducted by Brazil’s MDA, found that 80.2 percent of Brazilians thought the billions of dollars spent to host the World Cup should have been better spent elsewhere.

On Saturday, about 1,000  anti-World Cup demonstrators clashed with police after bank branches and shops were vandalized in Sao Paulo, Brazil’s largest city.

An anarchist group known as the Black Blocs is threatening to disrupt the World Cup. It has been suggested that such protests would undermine Brazil’s attempts to portray itself as a modern, forward-looking democracy.

Although one could argue that the Brazilian people exercising their hard fought right to protest, is actually the hallmark of a modern, civilised society. There was a time, not so long ago, when such protests would have been unthinkable.