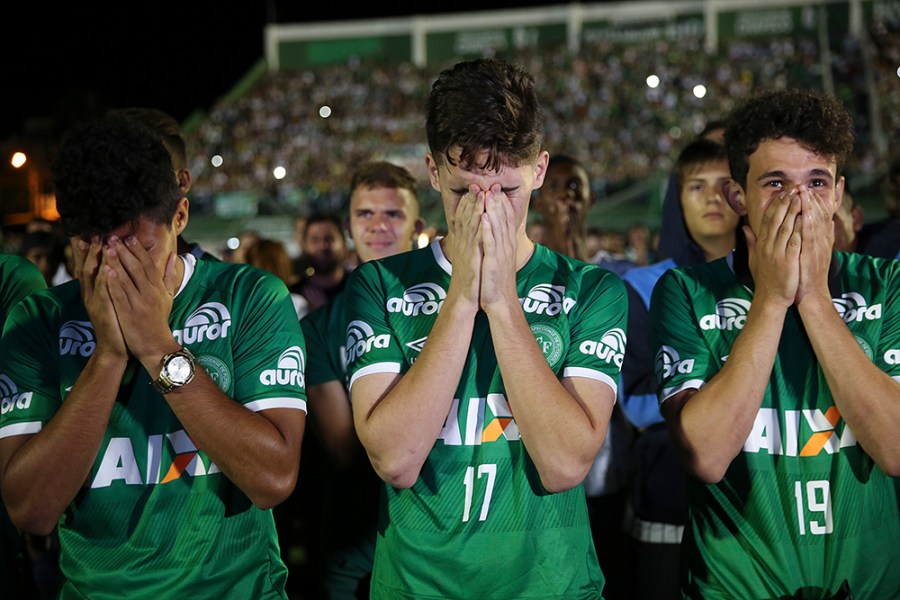 Last Wednesday in the Libertadores Cup, Chapecoense produced what may well be the greatest victory in the club’s history – but they could be stripped of the spoils.

As the club attempts to rebuild after the horrific air crash nearly six months ago, the undoubted priority is first division survival – and with four points from the first two rounds the team now coached by Vagner Mancini have made a sound start. Anything that they get from their debut campaign in the Libertadores is a bonus – and as they went into the fifth and penultimate match of the group phase, it looked as if the campaign was drawing to a close.

They had won a fine victory away to Zulia of Venezuela in the opening game, but had struggled thereafter. Chapecoense were well beaten at home to Lanus of Argentina, and then came off second best to Nacional of Uruguay, held 1-1 at home and going down 3-0 away. Their next fixture took them to Argentina to face Lanus, probably the best team in the group. Their chances did not look good.  But they dug deep to win 2-1. A home win against Zulia will be good enough to guarantee their participation in the knock out stage – a remarkable achievement in the circumstances – providing they are allowed to keep the three points they won in Argentina. This is no foregone conclusion. Against Lanus, Chapecoense fielded a player who should not have been on the field.

Nearly a month ago as they went down heavily to Nacional in Montevideo, tempers became frayed. Two players were sent off. Gangling defender Luiz Otavio was given a straight red for a brutal foul, kicking through high right into the midsection of an opponent. And winger Rossi followed for the bizarre offence of sticking his finger up the backside of Nacional captain Diego Polenta. An automatic suspension followed.

It so happened, though, that Chapecoense’s next international match was not in the Libertadores.  First they had the second leg of the final of the Recopa – an annual competition between the winners of the continent’s two club competitions.  As 2016 Sudamericana champions, they took on last year’s Libertadores winners Atletico Nacional of Colombia. Ahead 2-1 from the first leg, they went down 4-1 in Medellin – without either Luiz Otavio or Rossi. So, the club assumed, the pair had now served their suspensions and were free to return against Lanus.

But Luiz Otavio had been handed a three-match ban. The problem here is that it seems this fact had not been adequately communicated to the club. CONMEBOL sent out an e-mail on May 10th, addressed, it seems to the Brazilian FA, the football federation of Santa Catarina (to which Chapecoense belong) and the club. But it appears to be the case that the club e-mail used was not the correct one. Chapecoense, then, travelled down to Argentina fully expecting to Luiz Octavio.

When they handed in their team sheet before the game they were informed that the player was ineligible. At this short notice they were reluctant to change their plans, and alleging that they had not been informed through the correct channels, they stuck to their original selection – on the insistence of club president Plinio David de Nes. And the man who scored their late winner, glancing home a header from one of left back Reinaldo’s dangerous long throws, was Luiz Otavio.

This gives CONMEBOL a problem that needs to be solved quickly – before the last round of matches in the group on Tuesday night. In this case the club cannot make the frequent Brazilian complaint that the judgement has been prejudiced against them – the foul committed by Luiz Otavio was clearly worthy of a ban longer than one game, and it is frankly bizarre that Rossi got off so lightly.

It would be cruel indeed if Chapecoense were to be stripped of three points won in heroic fashion.  But by the letter of the law, it is hard to make a case in their favour. Even with the email bungling (and one might well wonder why these things are not published on the CONMEBOL website) they were informed before the game, and the decision to maintain Luiz Otavio in the line up looks stubborn and unwise.

Might the rules be bent just a little in their favour? It is a possibility. And given the goodwill the club understandably inspires, many would see a strict application of the laws as harsh in this instance. But when the idea was floated in Brazil a few months ago that Chapecoense should be protected from relegation for three years, the club were the first to kick it aside.  They did not want to be treated as a charity case – so in the Libertadores, the rules, however ineptly enforced, should also apply to them.