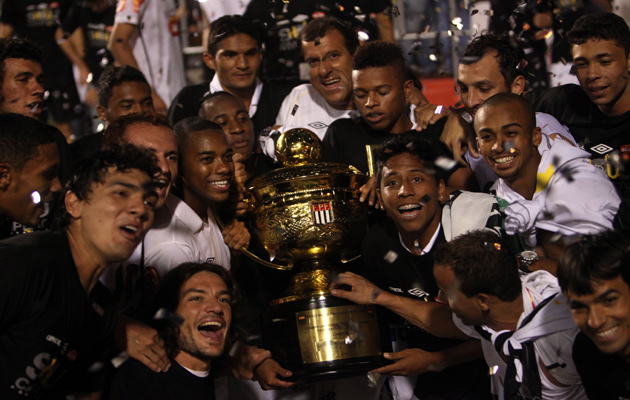 Four days after winning the Puskas prize for scoring the goal of 2015, Wendell Lira still had his head in the clouds. “There are no words to describe it,” he said of the FIFA Ballon D’Or event in Zurich. “It’s so rich, packed with stars, seeing all those famous people. And the amazing thing is seeing your own name in the middle of it – and when I won the award I was congratulated by Neymar, Kaka…”

Wendell Lira’s goal was a flying, twisting overhead kick described by Neymar as a move from Karate Kid. It was an extraordinary moment from an ordinary player, whose career reveals much about those who seek to make their living in Brazilian football.

When he heard that he made been nominated for the prize, Wendell was unemployed, spending plenty of time on video games and musing on whether to give up the game and work full time in his mother’s snack bar. At the age of 27 he had already played for 9 clubs, with two spells at two of them, going round in circles while the dreaded footballers age of 30 loomed ever closer.

His moment of glory last March came while playing for Goianesia in a local state championship game against Atletico Goianense – a team which from 2010-12 played in the national first division. In the giant Serra Dourada stadium, it was watched by a grand total of 342 paying customers – a figure which explains why so many Brazilian footballers are on the breadline.

Perhaps the most central problem is that of the calendar. The first few months of the year are given over to the State Championships, one for each of the country’s 27 states, with the national league getting started in May.

This is clearly harmful to the interests of the big clubs. Nowhere else in the world do teams with millions of fans spend so long playing tiny teams who barely qualify as professional. In a contemporary, globalised context it makes it impossible for Brazil to compete for players – not only are the clubs selling themselves short financially, but it is also clearly not interesting for a big name star to take part in the State Championships. Effectively, Brazilian football now has a three and a half month pre-season until the national league kicks off.

But it is a structure that hardly benefits the little teams, either. Because when the State Championship comes to an end (which can be in early April for those eliminated quickly), those teams outside the four national divisions often have no more competitive games until the following year – and so large numbers of players are unemployed and looking for new clubs, which helps explain why Wendell Lira has moved about so much.

Who, then, does benefit from the current state of affairs? The answer would seem to be the State Federations. For them, these local championships are all return and no risk. And their political weight inside the CBF, Brazil’s FA, has preserved the sad status quo.

But things have changed. The government have managed to force through a change. Each of the 27 State Federations has a vote inside the CBF. And now, along with the 20 first division clubs, the 20 second division clubs also have a vote. So the clubs outnumber the federations. The clubs, then, can wield new power – if they can unite. This, unhappily, is a huge ‘if.’

The way forward would seem to be obvious enough; play the national leagues throughout the season. Those clubs outside the four divisions compete in their own state against each other over the course of several months, with the winners then meeting the bigger clubs in a midweek knock out format, where interest is generated by the fact that in a one off game there is always the possibility of an upset. Such a format would keep the small clubs in activity for longer, while freeing the big clubs from meaningless fixtures and enabling their calendar to fall in line with the rest of the continent and the world.

But can the big clubs stay on the same page long enough to make the change? Here there are serious doubts. Progress is indeed being made. The existing power structure is threatened by a provisional new league being set up by some of the big clubs from Rio, Belo Horizonte and the South. The North East already has its own pan-state competition for the region’s biggest teams. But then there is Sao Paulo, by some distance Brazil’s richest state, where some of the lesser teams are wealthy enough to be competitive. The Sao Paulo State Championship, then, is by far the country’s best – and, comfortable with their own situation, the major clubs from the city are not showing many signs of rebellion against a CBF power structure massively weakened by all the FIFA-Gate revelations. And real change is impossible without the Sao Paulo clubs being on board.

Meanwhile, Wendell Lira has fixed himself up with club number ten – Vila Nova, yet another Goiania outfit. He hopes, though, that winning the Puskas prize might help earn him a move to Europe. “Ah, that would be my dream,” he says, “to move abroad and be able to help my family” – bringing in more cash than he ever could by working in the snack bar.