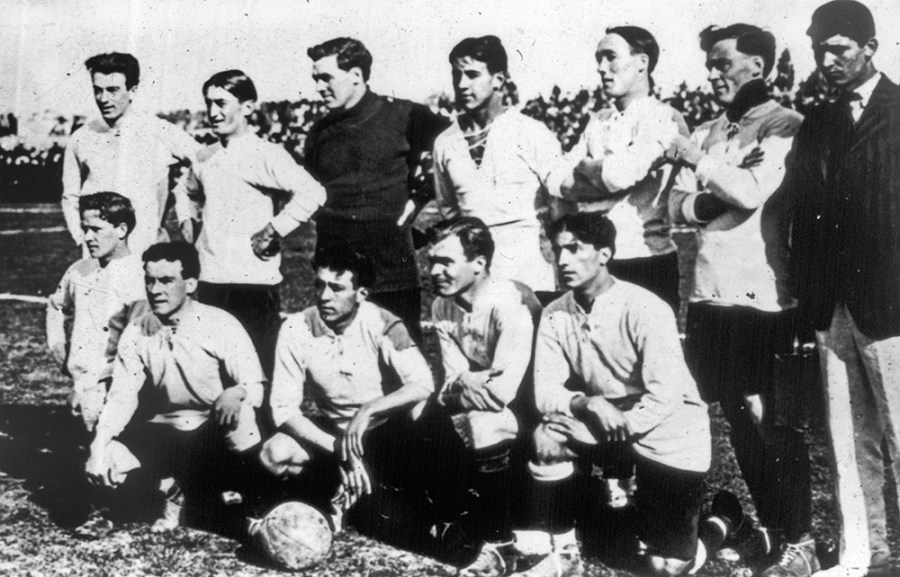 It may even be possible to specify the day when football took on quasi-religious status in South America – March 5th 1918.

On that day a member of the team of Nacional, already a giant club in Uruguay, by the name of Abdon Porte left an event at the club’s headquarters, took a tram to their stadium, walked out to the centre circle and shot himself.

His precise motives remain unclear. A mythology has grown around the view that he was in despair at the prospect of losing his place in the starting line up. This may be true. But he was no washed up player at the end of his career. Porte was 25, a club stalwart first in defence and then in midfield. He had been good enough to be part of Uruguay’s victorious squad in the previous year’s Copa America. Even if he was suffering a loss of form, there was no reason to believe that it was definitive.

Porte was due to be married at the start of the following month. It is possible, then, that he was overwhelmed by the responsibilities of sustaining a family – especially as football was still an amateur sport in Uruguay.

The only certainty is the force of his love for Nacional. He made this very clear in the notes that he left, and he still stands as a symbol of passion for the club. Fans have even produced a banner with his face on it, and to commemorate the centenary of his death, Nacional have even produced a special shirt in his honour, somewhat morbidly blood red in colour.

What makes his suicide even more extraordinary, with a puzzling lack of perspective, is that on the other side of the Atlantic, men of Porte’s age were being mowed down in their millions in the First World War. The meeting of old style deference with new style machine guns led to industrial scale death on the battlefields of Europe – the continent from which the bulk of the Uruguayan population had recently emigrated.

Nacional were less than 20 years old when Abdon Porte died in their name. The speed with which football took hold in the south cone of South America is truly remarkable. Just a few years earlier, it would have been impossible to predict that the continent would become synonymous with the game. But as immigrants poured in to Buenos Aires and Montevideo, Rio de Janeiro and Sao Paulo, football gave them a common bond.

The First World War is clearly a key part in the process. Earlier in the century British clubs had made frequent tours to the region. Exeter City cut short their 1914 tour because of the outbreak of hostilities, but not before becoming the first opponents of the Brazil national team. The war put an end to the tours. But the South Americans had been learning quickly, and were already reinterpreting the game, replacing the straight line running of the English with something more balletic, something ideal for the man with the low centre of gravity.

And while Europe was busy tearing itself to pieces on the fields of Flanders and elsewhere, South America was getting itself organised on the football field. The Copa America was launched in 1916 and held almost annually in the early years; Uruguay won the first two editions, in 1916 and 1917. The new competition did a great deal to raise standards and interest. A direct line can be traced between the birth of the Copa and the inauguration of the World Cup in 1930. In next to no time football in South America had become an extra reason to live – and in the case of Abdon Porte, perhaps a reason to die as well.