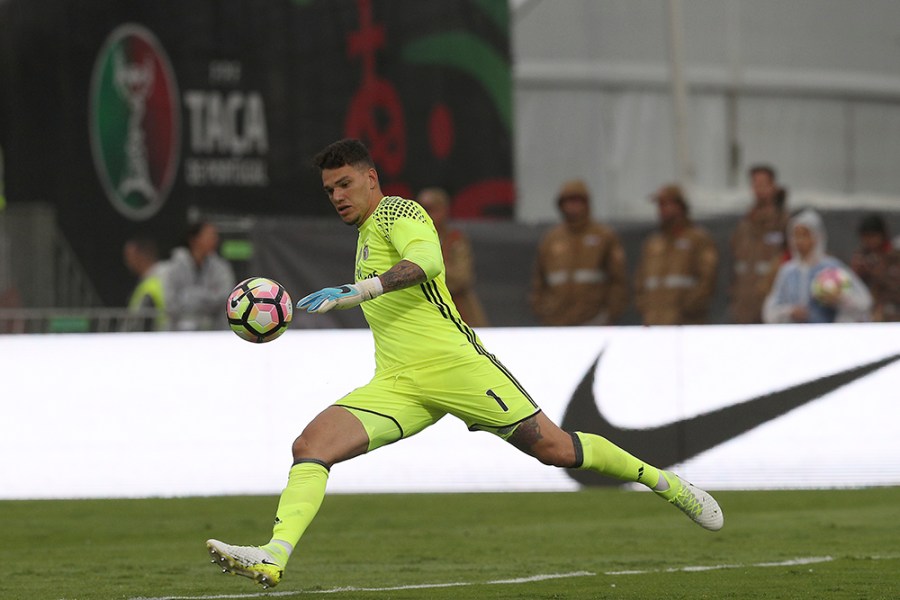 To sign one Claudio Bravo might be regarded as a misfortune.  To sign two would certainly look like carelessness. Pep Guardiola has made a big decision with his apparent willingness to make Brazilian Ederson Moraes the most expensive goalkeeper in the world.

Ederson is a decade younger than Bravo, who was already showing signs of decline before moving to England – most noticeably in the group stages of last year’s Copa Centenario. The Benfica keeper is also bigger, more imposing physically – and so far he has dealt well with high pressure games, starting from the time that fellow Brazilian Julio Cesar was injured and he was thrown into a crunch league game against Sporting Lisbon. This is just as well, because, assuming the move goes through, he will be playing behind a defence which has not always inspired confidence, and trying to build a relationship with his team-mates in an environment where every error will be placed under the microscope. He stands to be a key signing in Pep Guardiola’s vital second season.

The signing is good news for Benfica, and also for Sao Paulo back in Brazil, were he played at youth level. They will receive part of the fee. But Ederson is a classic illustrative tale of the way that the Portuguese clubs have stayed competitive – picking up South American talent early, grooming it and selling it on at a massive profit.

Benfica would seem to have done a fine job with Ederson, who has something of a prototype Manuel Neuer about him; commanding, very quick off his line, with quick reflexes and seemingly a chest of steel, and a confidence with the ball at his feet. He can give the ball a tremendous thump – a handy option to deter the opposition’s high press and allow Manchester City to build their moves from the back.

Moving to the Premier League would also increase the young keeper’s profile and help his challenge for a place in the national team. He was earmarked to play in last year’s Olympic tournament until injury struck, and has just this year forced his way into the senior squad.

For almost two years now Brazil have given their number one shirt to another young keeper, Alisson. This was always seen as a gamble, but goalkeeping coach Taffarel, with three nearly flawless World Cups to his credit, identified Alisson as the long term bet. He has done nothing wrong. But his move from Internacional of Porto Alegre to Roma has left Brazil with a headache.  Alisson has spent an entire season on the bench. There is the obvious risk of inactivity taking the edge off his game. Anyway, remembering the experience of the last World Cup, Brazil are anxious to avoid solidifying their line-up an entire year before Russia 2018, and are keen to foster healthy competition for a place in the starting line up.

They play two friendlies in the next few days, travelling to Melbourne to take on Argentina and Australia.  The entire first choice defensive unit have been given a rest. Ederson, then, has a chance to make a name for himself with the national team. But he will have to fight for it. Also in the squad are Weverton of Atletico Paranaense, who ended up playing in the Olympic gold medal winning team, and Valencia’s penalty specialist Diego Alves, who has deserved an opportunity for a while. Trying to win the nod over that pair will be good preparation for what is likely to be an intense first season in the Premier League.