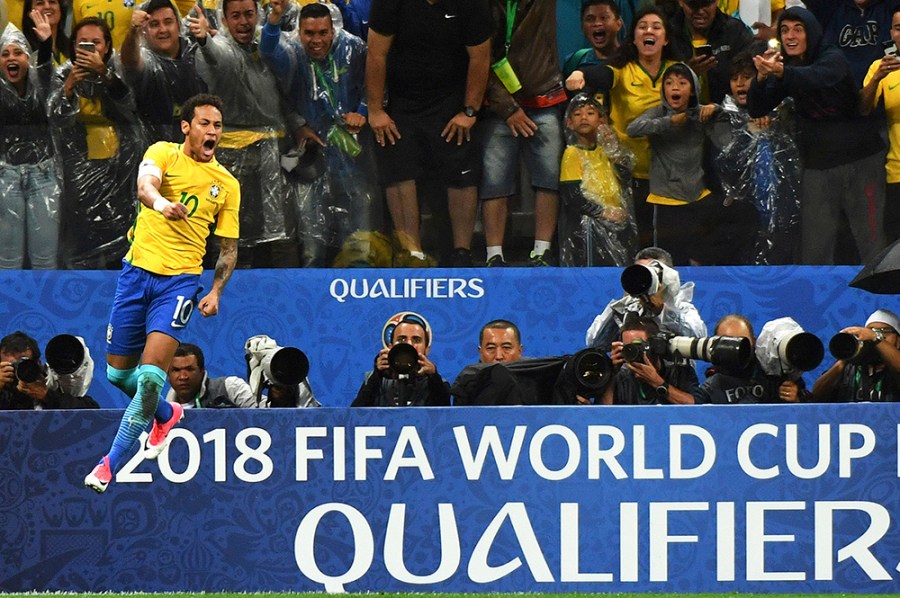 Brazil’s 100 per cent World Cup qualifying record under coach Tite faces its biggest risk to date on Tuesday, when they are away to Colombia in the 16th round of the marathon campaign.

True, Colombia are far from happy with their own level of performance. But they do lie second in the table, and the match will be played in the scalding afternoon heat of Barranquilla. Strangely, Brazil chose to play Thursday’s game at home to Ecuador in Porto Alegre, way down south, leaving themselves a massive journey to get up to the northern Colombian coast.

Of course, whether Brazil win or lose is of limited relevance. After those nine successive wins under Tite, they have not only already made it through to Russia, they have also guaranteed a first place finish in the qualification table.

This is a side, then, well entitled to be planning for next year’s World Cup. The real test will come next year. The generally low standard of Brazil’s current South American opposition is one thing. The giants of Western Europe (who have, after all, supplied five of the last six World Cup finalists) are likely to offer a stiffer test.

In the meantime, all Brazil can do is beat the opposition placed before them. It may seem churlish to criticise a team which has been achieving this objective with such style and swagger, but there would appear to be one problem that has yet to be ironed out – a defect of which Tuesday’s opponents are well aware.

In all of his senior international career, Neymar has only once been on the losing side in a competitive game (acknowledging that the defeat to Paraguay in the quarter-finals of the 2011 Copa America came on a penalty shoot out after a drawn match). That loss was against Colombia in the 2015 Copa, held in Chile.

Carlos Sanchez performed such an excellent marking job on Brazil’s attacking star that Neymar boiled over in frustration. After the final whistle he manhandled the referee and as a result was suspended for the rest of the competition and the opening two rounds of the World Cup qualification campaign. In the 11 rounds he has played, Neymar has picked up five more yellow cards – and the fifth, last Thursday against Ecuador, was especially worrying.

There was little edge in the game, and even less pressure on the hosts. Brazil had already qualified.  Ecuador were merely looking to hang on and the Porto Alegre crowd seemed strangely quiet. There was no real reason for the emotional tone of the game to rise to potentially dangerous levels. But it did – largely because of Neymar.

In the first half Brazil’s star number ten went through a phase when he seemed determined to draw fouls in the middle of the field. The opposition obliged – it was too far from goal to be in shooting range, and anyway Neymar is so quick and talented that he can turn a genuine attempt at playing the ball into a foul. Contact was then followed by those elaborate diving routines that tend to wind up the opposition.  The stakes rise. Neymar became frustrated if he is not awarded a foul and the opposition become irritated if the referee blows. The game can become out of control. For a brief spell Neymar appeared to lose his head, and there was inevitability about the yellow card he received for a crude challenge.

This – the emotional tone of the game and the yellow cards – may not be a problem now. But it could certainly become one during the World Cup, when the stakes and the pressure will be so much higher.

Brazil need to get a grip as soon as possible. But here Tite has a problem. His predecessor, Dunga, had made Neymar the captain.  Last year the player made it clear that he did not want to continue in the role.  Tite has spent his time revolving the captaincy. It has been a different player in every game – a nice way to make players aware of their importance, but an option which runs the risk of leaving the team without a set leadership structure on the field.

Thursday’s events could have been nipped in the bud. An authority figure such as 1970 captain Carlos Alberto Torres would surely have stepped in and gently reminded Neymar of the dangers of meaningless showboating. It all ended well for Brazil – but largely because the half time whistle blew and Tite was able to get his team properly focused during the interval. Next time this is a task which might need doing on the pitch. But do Brazil have anyone to do it?