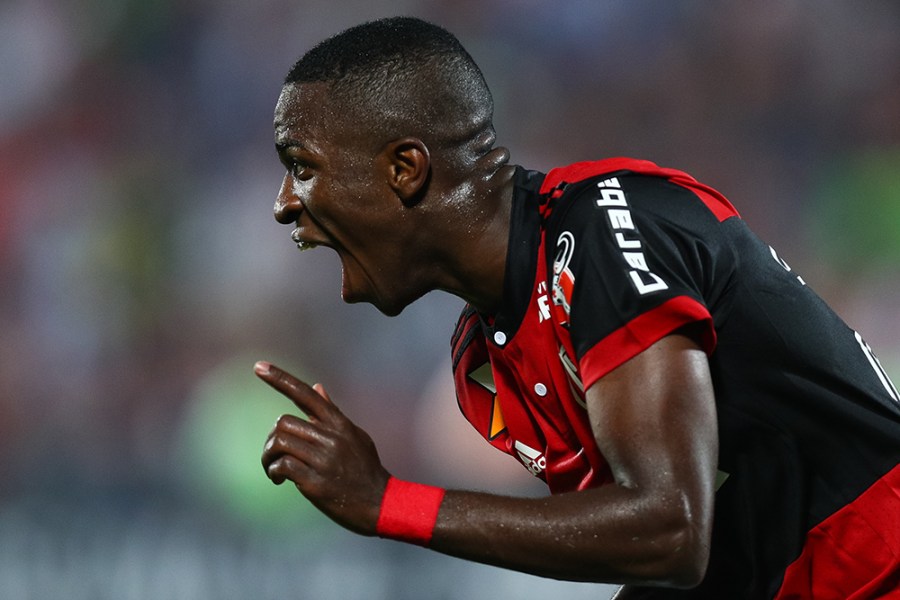 The big news should have been the magnificent goal that Vinicius Junior scored for Flamengo in the Rio de Janeiro derby against Botafogo. Cutting in from the left onto his stronger right foot, he curled a superb shot into the far top corner, clinching a 3-1 win for his side.

It was an indication of the quality of a 17-year-old who is already bound for Europe. Real Madrid caused a splash last year when they agreed to pay an astonishing 45 million Euros for such an unproven talent. Still with Flamengo, Vinicius is having to grow up in public. He is, understandably, very raw. There are attempted tricks that go wrong, moments when he tries to do everything in too much of a hurry and plenty of badly chosen options. But when he gets it right, as he did in that goal against Botafogo, there is a glimpse of a player who might be on his way towards tipping the balance at the highest level.

The goal, however, was overshadowed by the celebration. Vinicius wheeled away in triumph and rubbed his eyes in an imaginary cry – this setting off a diplomatic incident between the old Rio rivals.

A decade ago, after a defeat to Flamengo, the entire Botafogo team, plus the coach and the president, made a joint appearance at the press conference to complain about the refereeing.  Many of them were in tears – and ever since this has been a motive for Botafogo to be taunted by other fans.

The false tears of Vinicius Junior, then, touched a raw nerve. This latest Flamengo victory came in a local semi-final. But where would the final take place?

The Maracana, still with its future uncertain, is currently unavailable because it has been hosting musical shows. The alternative venue for a big local match is the stadium built for the 2007 Pan-American Games and used for the athletics in the 2016 Olympics. But the Engenhao – after the area in which the ground is located  – or the Nilton Santos – to give the place its new official name – is being rented out by Botafogo. And, outraged at the provocation of a 17-year-old’s goal celebration, Botafogo refused to allow Flamengo to use the stadium. A Rio de Janeiro final (Flamengo against Boavista) took place on Sunday outside the state of Rio – it was held in the neighbouring state of Espirito Santo.

Apart from the obvious absurdity of the situation, this is depressing on a number of levels.

The first one is that Botafogo really should not have the right to make such a decision. They rent the ground. They did not pay for its construction. The money came from tax-payers – and since Flamengo supporters are considerably more numerous than those of Botafogo, it would seem fair to assume that Flamengo fans made the greatest contribution. For showpiece occasions the stadium should be available to all local clubs.

The second is that Botafogo find themselves in a difficult financial situation. Their reduced budget team has performed above expectations over the previous 18 months, but they have made a disappointing start to the year. They have already sacked one coach, and look set to have a tough time over the next few months. Any extra revenue would be welcome, and the club would receive for letting their stadium out for the Flamengo-Boavista final. The club’s infantile display of wounded pride worked against their own interests.

And the third level of depression is the deepest. Brazilian football is operating massively below its potential, in large part because of an insane calendar imposed on the first division clubs by the CBF, the local FA. The obvious solution would be for the clubs to break away and organise their own championship on more rational lines. But with the mentality of those who currently run the clubs, any such display of unity would not seem to be the remotest possibility.

Still run on a social club basis, the presidents are elected figures – and such a system almost unfailingly tends to encourage demagogic playing to the gallery, treating local rivals as enemies rather than as business partners.

Indeed, Sunday threw up further evidence of the type of hostility generated by big Brazilian derbies. The Vitoria v Bahia clash in Salvador ended 11 minutes early. Following a mass brawl a grand total of nine players were sent off, and Vitoria were left without enough of a team to proceed with the game.

Fortunately in Rio by the end of the week cooler heads had prevailed. Flamengo were left without an option for their debut match in the Libertadores Cup against River Plate next week – a game that will take place behind closed doors (punishment for Flamengo fans rioting last December in the final of the Sudamericana Cup).  This time Botafogo have ceded, allowing Flamengo to use the Nilton Santos.

And Flamengo will swagger in as champions of the Taca Guanabara – in effect the first half of the Rio State Championship. On Sunday they beat Boavista 2-0. The second and clinching goal came from Vinicius Junior, getting the slightest of touches on a ball that was probably goal bound and celebrating the first title of his senior career.