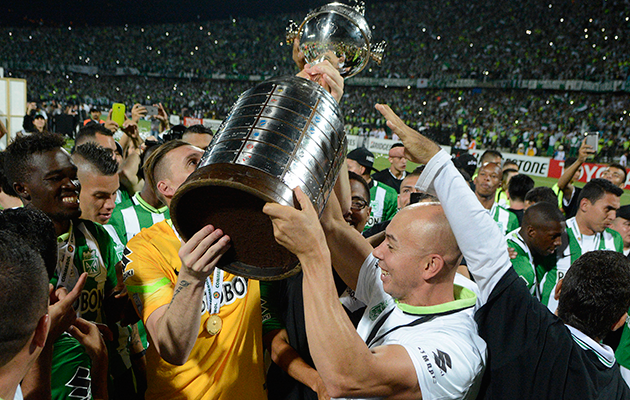 Tim Vickery‘s Notes from South America: 2018 Libertadores is up and running, will feature the last two-legged Final

The Libertadores Cup, South America’s equivalent of the Champions League, is about to get underway. But even before the group phase kick off in 2018, the 2019 version has stolen the spotlight.

From next year, it has been announced, the continent will do away with its old tradition of a two legged, home and away final. Instead it will come to a climax with a one off showpiece in a neutral venue – it would seem that Lima, Peru, is the front runner.

CONMEBOL president Alejando Dominguez has been pushing for this change for some time, and finally managed to have it approved on Friday. “More than a match,” he said, “this will be a big sporting, cultural and tourist event which will bring great benefits to South American football, its clubs and its fans… It will offer a world class spectacle and a better experience at home and in the stadium.”

But who will be in the stadium? South America is not Europe. Distances are vast, transport infra-structure is deficient and the distribution of income is dangerously skewed towards the rich. For many supporters around the continent a trip to, say, Lima, would be beyond their means. Many of those who follow their club would be unable to be present on the big day.

CONMEBOL are aware of this. They are conscious that this is a controversial break with the tradition. But they have their motives – which go way beyond any mere instinct to imitate the European example. In short, they are desperate.

The relationship between football and television has, of course, revolutionised the game and its finances. It is not very long ago that the effective audience for a game was restricted to those inside the stadium. Now millions can be watching all across the planet, meaning that football generates much more money than before.

In the case of South America, the influence is clear. It was an alliance between television and football administrators that brought the Copa America back to life in 1987, that instituted the massively successful marathon format of World Cup qualification in 1996, which expanded the Libertadores Cup in 2000.

But it was also an alliance that has ended up in the courtrooms. The so-called FIFA-gate case is all about the interface between broadcasters and administrators, about how the former were bribing the latter to pick up media rights at knock down prices. CONMEBOL, with all of its past presidents of the last 30 years implicated, is now left to pick up the pieces.

Worried about the big clubs breaking away to organise their own tournament, CONMEBOL has been increasing the prize money; this year’s Libertadores will pay out double the 2017 sum. The competition has been re-organised; from last year it is now held from January to late November; previously it was squeezed into half of the year.

This was a panic-struck move, done with no consultation. And it caused the Mexican clubs – invited to take part since 1998 – to pull out of the Libertadores, alleging incompatibility with their own domestic calendar. The loss of the Mexicans, with their huge TV audience, was a significant and foolishly unforeseen blow to an already besieged organisation.

And so the response is the one-off final on a neutral ground – and one of the advantages of Lima is that the Peruvian capital is highly likely to be a neutral ground. No team from Peru has reached the Libertadores final since 1997. In only one of the last seven campaigns has a Peruvian club made it beyond the group phase. It would take a big shock, then, for a team to be enjoying home advantage in next year’s final – which will take place on a Saturday afternoon.

The timing is all part of the extra appeal of a one-off showpiece. It is hoped that this will be more attractive to a global audience, which translates into extra and much needed money for CONMEBOL’s coffers. Alejandro Dominguez said that he is imagining “bigger sums for the tournament and those clubs reaching the final, and a bigger projection for South American football.”