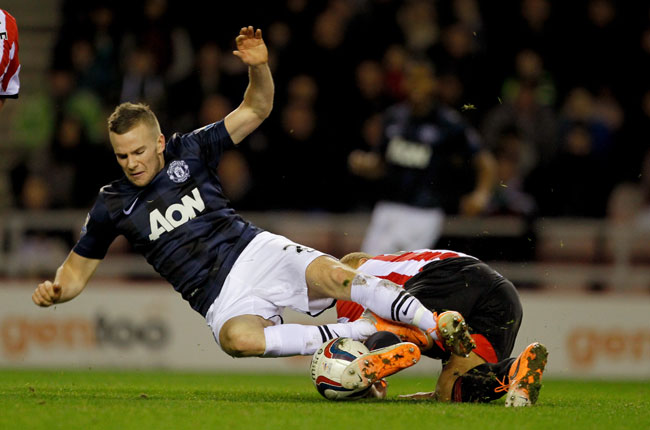 Tom Cleverley displays some of the tiki-taka skills that are not appreciated in England.

Manchester United midfielder Tom Cleverley has admitted that he feels like a ‘scapegoat’ this season after coming in for criticism from fans and the media.

Cleverley has been singled out as one of United’s biggest underperformers during what is becoming a dismal season under new manager David Moyes.

Cleverley’s playing style has come under particular scrutiny, but the England international feels the way he plays is being undermined for cultural reasons.

“I watch Spanish football a lot. If they pass the ball sideways but keep possession, the fans clap them,” he told the Daily Mirror.

“Their attitude is that as long as you have got the ball, the other team can’t hurt you.”

Indeed, but not if you’re losing at home to Fulham – then they demand a little more from the reigning champions.

“I know the mentality is different here and that is what makes our game the best in the world because it is so intense,” the midfielder added.

“But sometimes I have got to not listen and play my game because I feel I’m doing the best thing for the team.”

Cleverley has been an inconsistent performer for United side this season and admitted that criticisms of his performances have got to him at times.

“When I first started getting singled out, it stung, yeah but it’s something you have got to learn to take when the team is not doing well,” he said.

“My job goes under the radar at times.”

One person’s under the radar is another’s anonymous, and it has to be said that at times this season, Cleverley has been peripheral to the point of invisibility.

“I am not a player who’s going to beat three or four people and stick it in the top corner or go round tackling people like Roy Keane,” he said.

“I would like the fans on my side and it hurts a little bit when you have grown up at the club and love the club every bit as much as the supporters.

“I feel I’ve been made a scapegoat a little bit. A few people in the media certainly seem to have a perception of me not doing much in the team.”