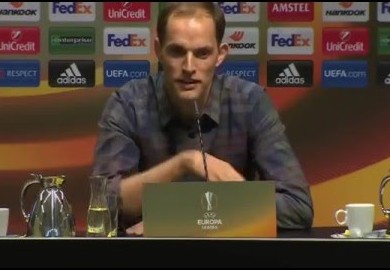 Klopp – who spent seven years at Westfalenstadion won two Bundesliga titles – will be reunited in an emotional return with his former club.

Tuchel believes that Klopp will receive a warm reception.

“Anything else but a warm welcome will be a big surprise – he deserves it,” Tuchel said of his predecessor.

“He did a great job over the years here and I am 100 per cent sure that nobody forgot this time, or forgets about him. It’s not necessary to forget it and put it aside.

“I think it’ll be a very, very warm welcome.”

Thomas Tuchel, Dortmund coach: "Anything else but a warm welcome for Jürgen Klopp will be a surprise." #UEL pic.twitter.com/kYPOXKmqXQ

However Tuchel did have a warning for his team and said that Klopp willl be eager to spoil his own homecoming:

“But, the moment the whistle blows he wants to win and is eager to win. We are as well,” added Tuchel.

Tuchel has seen Klopp frequently since the latter departed to Merseyside:

“For me, it’s not the first time that I welcome Jurgen back to his former club. It’s the sixth time for me, so it’s kind of like a routine between us.”