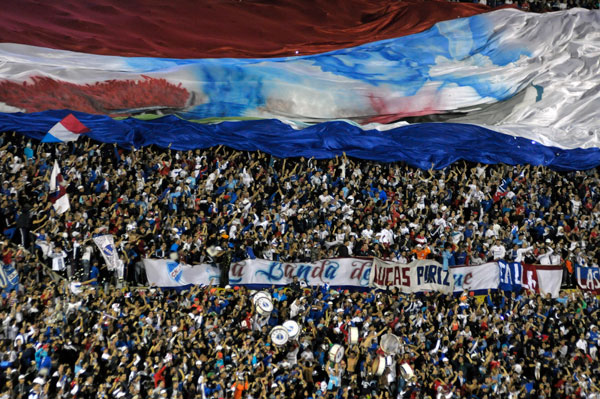 Eugenio Figueredo, president of South American football’s governing body CONMEBOL, has dismissed reports suggesting Uruguay could be kicked out of the World Cup, after the country’s FA stepped down en masse.

The Uruguay’s Football Association (AUF) board has resigned after the country’s government decided to withdraw police protection at matches involving the country’s big clubs Peñarol and Nacional because of continuing violence involving their “barras bravas” hardcore fans.

“The well-publicised acts that have occurred in recent times show the need for [the AUF board to take] a step to one side and allow other political views to govern our football,” the resignation letter from the AUF president, Sebastián Bauzá, said.

Newspapers El Pais and El Observador suggested that FIFA might interpret the decision by the Uruguayan President, José Mujica, as interference in football affairs and suspend the AUF and the Uruguay team from competition.

However, Figueredo said he did not believe there was any risk of the 2010 semi-finalists not playing at the World Cup.

“When governments intervene, a national association is provisionally suspended [by Fifa]… But I have no proof the government played a part in Bauzá’s exit,” said Figueredo.

“The World Cup is already on top of us. Can you imagine a national association being suspended [now] for an internal or sports politics matter? Fifa is a bit more serious. I don’t think Uruguay’s place at the World Cup is at risk.”

Mujica withdrew police protection after Nacional fans fought police at the end of their team’s 4-2 home defeat by Argentina’s Newell’s Old Boys in a Libertadores Cup match in Montevideo last Wednesday. There were 40 arrests and several police officers and supporters were injured.

The government ruling also led to the postponement of Peñarol’s first division match at Miramar Misiones at the weekend.