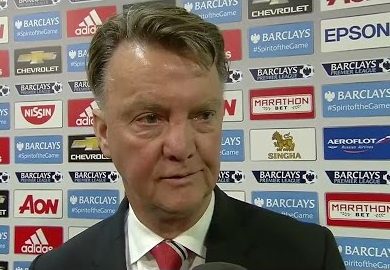 Man Utd won the rearranged game against Bournemouth 3-1 last night, but missed out on a top four spot to local rivals Manchester City on goal difference.

Van Gaal understood the fan’s reaction, but stressed that the team are still in transition.

He said: “Of course (I understand the boos), because I have also said that the expectation is very high, especially the fans.

“They are expecting a lot. But I think these expectations are much too high, and we are a team in transition, and that I have said when I started here.

“Maybe I have to bring over the message much clearer than I have done.”

Reflecting on the season, Van Gaal lamented the number injuries during the winter as a factor for Utd’s indifferent form and said the lacks of goals was also a factor.

He said: “More or less, that is the issue (lack of goals), but I think the issue is the amount of injuries in the months of November and December, and also that it was particularly in two positions, the two full-back positions. That was very tough I think at that time.

“I have also said this season that we need creative, fast attackers. We have to take care of that, but nevertheless, when everybody was fit we were first in the league, and these are the facts.

“You can never see into the future, you can only analyse and evaluate the past, that is what we have to do and we will make up our minds.”

When questions whether he will be at Old Trafford next season, Van Gaal was as ever blunt.

“Because I have signed a three-year contract.”