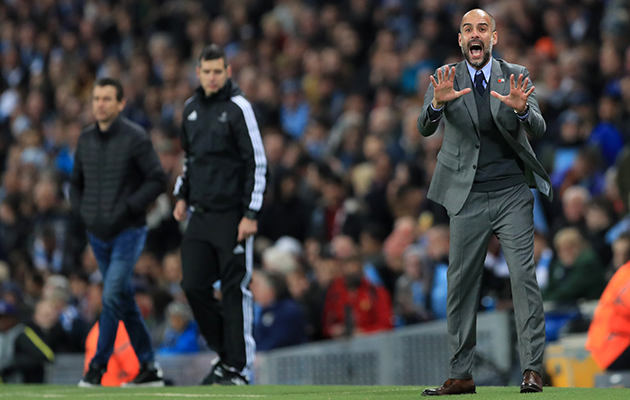 Pep Guardiola claimed Manchester City’s 3-1 defeat of Barcelona could act as a catalyst to propel the club to parity with the finest teams in the world.

Two goals from Ilkay Gündogan and a Kevin De Bruyne free-kick overturned Lionel Messi’s opener in a breathless encounter at the Etihad Stadium.

Guardiola admitted his players had initially struggled to contain a scintillating first half attacking display by Barcelona.

“If you talk about the first 38 minutes, we are not able to compete against the best teams,” said the City manager. “This club was 25-30 years out of Europe while Barça, Real Madrid, Bayern and others were playing every year. We need time, the people don’t give us time but the club give us time.

But, despite the first half onslaught, City were able to adapt their game and transform the contest after the break.

“We played long balls because we are not ready to keep the ball,” Guardiola said. “We are three or four months into playing a different way, Barça have been playing their way for 25 years. We try and now we realise that we won against the best team. For the future generation of players who come here they are going to realise: ‘Wow, these guys are able to beat the best team.’

“It is the same when the group of Joe Hart and Vincent Kompany won the Premier League twice so the players who come now know they have to do that.

“It is not as though our owner Sheikh Mansour and our chairman Khaldoon Al Mubarak could come here and say ‘we are going to create the best team in Europe.’ You need 10, 15 or 20 years to stay there.

“We are going to try to reduce that time, to leave nights for City fans like they got against Barcelona.”

Both Guardiola and his Barcelona counterpart, Luis Enrique, concurred that the opening period showed the Spanish champions at their absolute best.

“For the first 38 minutes we saw the best team in the world,” the City manager said. “They changed their centre-backs to make diagonal balls to the full backs and we were in real trouble. They have the chance to score the second goal and, if they had, the game is done, finished. But football is like this. Our goal changed everything for our mood. The players realised the bad moment is over.”

Luis Enrique, who was without the injured Andres Iniesta, Gerard Piqué and Jordi Alba, plus the suspended Jérémy Mathieu, agreed with his former team-mate..

“I think it was one of the best 40 minutes we have played, particularly on a stage like this against a top-quality rival,” he said. “The first few minutes we played really well. It is a shame after the error we made for the first goal, from then on we had a bad time.

“When you concede a goal in that way it is normal you go through a bad period after that and in the second half we hoped to continue to dominate but because of errors we made and pressure from the opponents, we didn’t have as much possession. City took advantage of our errors and they have got some top-quality players. The first 40 minutes for us, the next 50 for them. The score reflected that.”

Guardiola insisted there was no extra pleasure gleaned from defeating the team he led to two previous Champions League triumphs.

“I am happy for City. I played against Barça in Munich. I am happy we got three points. I learned some things about my players, how we can play on the counterattack and that we can use that as a weapon in the future but I am not more happy because we beat the club I love so much.”

The City coach also refused to criticise the referee, Viktor Kassai, for booking Raheem Sterling for diving when he was denied what looked a clear cut penalty having been caught by Samuel Umtiti inside the Barcelona penalty area.

“If you want to beat the best teams in Europe, and we are not, you can’t complain about these things, you have to overcome,” he said. “In football the worst things are excuses. Excuses mean you cannot grow or move forward.”