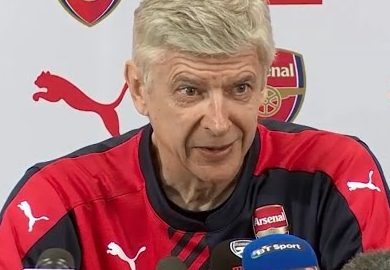 Arsenal manager Arsene Wenger has dismissed contract reports that he will be offered a two-year extension.

A report in The Times claimed that owner Stan Kroenke would like Wenger to decide his future by October, otherwise arrangements would have to be made to find his replacement at the end of next season when Wenger’s current deal finishes.

However when asked about the story at his press conference ahead of Sunday’s Aston Villa game he said: “That’s completely wrong, and I don’t know where this information comes from.

“You can treat that as just an invention – one more. It’s absolutely false, and I would like the press to check before they give this information out. They could have checked with myself or the club and we would have denied it.

“I think about the next game. I have full commitment as long as I am under contract. For the moment that’s all.

“I’ve extended my contract [in the past] at a period when it was vital for the club. I will see where I stand and the club stands at the end of my contract.”