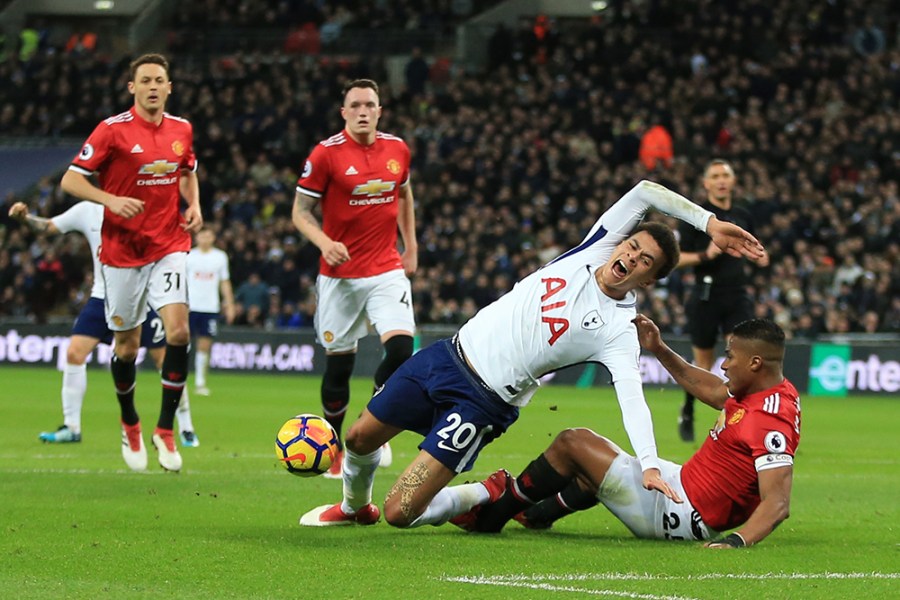 When it comes to diving, Dele Alli has form

The Boy Who Cried Wolf, you might say. When Tottenham’s Dele Alli was blatantly fouled in the penalty box playing against Manchester United, no spot-kick was given. To dredge up another saying, be sure your sins will find you out because when it comes to spot kicks given and not given, Alli has form.

One remembers him gaining one penalty which was surely a blatant dive at Wembley playing for Spurs. He has so far however been booked three times for diving, the worst record in the Premiership.

But his Tottenham manager Pochettino, who flourished as a player in his native Argentina where such things are far from unknown, has laughed off the controversy about Alli and virtually asserted that such chicanery is just part of the game.

But if diving in the penalty box is the most lamentable of such offences, it must also be stated that there is a demeaning tendency of players to dive in search of free-kicks all over the field.

Mick Harford, a bruising centre-forward in his day, recently had hard words about the current tendency. “You went shoulder to shoulder and didn’t want anyone to get the better of you. It was a sign of weakness if you went to ground. You didn’t want to be out-muscled. Staying on your feet was an art. It was important to have the strength to survive the knocks. It would really take something to knock you down. It was more honest. It seems to be happening far too often. It’s a terrible culture with players trying to con referees. It’s cheating.”

So beyond doubt it is, though perhaps not of the worst kind. One thinks back to Diego Maradona’s Hand of God goal at the Azteca stadium in the World Cup in England. Or how another arguably great player Luis Suarez punched out a ball that was flying into the net against outsiders Ghana in the World Cup, was sent off and stood jeering and exulting from the sideline when the penalty was missed and Ghana went out.

He declared that this sort of thing went on in Uruguay all the time; fans even sent him, perversely, a trophy to commemorate his infamy.

To give Maurizio Pochettino his due, he probably has a point when he accuses Michael Owen of blatantly diving when challenged by not touched by him at the 2002 World Cup. Well, perhaps there was just a shadow of a touch involved. England scored from the ensuing penalty.

“Owen jumped like he was in a swimming pool,” Pochettino has said. “I didn’t touch him, I promise you. It is true.”

Some kind of revenge I suppose for the expulsion in a previous World Cup when Diego Simeone, now such a successful manager at Atletico Madrid, fouled David Beckham, who foolishly and petulantly kicked out on the ground. Off he went and England were reduced to a gallantly rearguard action.

Chris Sutton, once himself an England centre-forward, has opined: “There are two many players who are looking for contact. Alli is one, Wilfried Zaha is another. They need to be fearful of what punishment they will face.”

It surprised me recently to see a daily sports columnist, in a tribute to Pele, declare that his triumphs were all the greater in that he was obliged to play on uneven pitches. I covered his four World Cup from Sweden in 1958 to 1970 in Mexico and cannot recall the pitches then being anything other than perfectly smooth and adequate.

In passing may I refer to the maddening habit of sports columnists, not to mention many a columnist in other pages of the papers, misusing the term “begging the question”. Gentleman: it does not mean raising the question, asking the question or posing the question. Its quite specific meaning is to assume something that has not been proved. “This begs the question,” one maddeningly reads. No it doesn’t. Back pray to the drawing board.