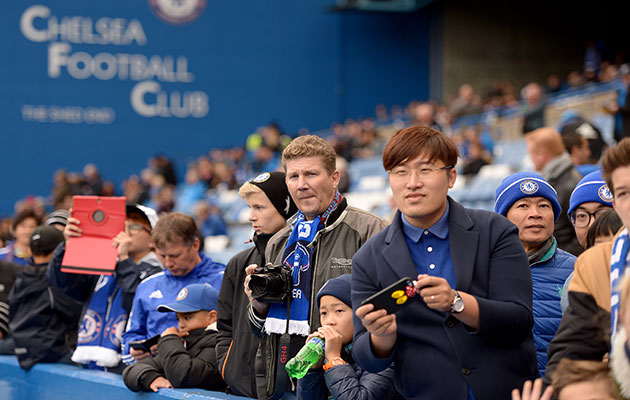 Chelsea has a higher ratio of spectators from overseas than any other club in England, a study of foreign visitors to Premier League matches has found.

Research from ticket sales platform Ticketbis.net found that 28.05% of overseas buyers for 2014/2015 Premier League games last season went to see Chelsea. In second placed came Arsenal who welcomed 26.46% of the overseas visitors, and Manchester United who are third on 15.91%.

The picture is reversed at Arsenal and Manchester City where Champions League games cost £165 and £147 respectively, slightly more expensive than Premier League games – which on average cost £164 and £133 each club’s home games.

Americans are the Premier League’s biggest foreign contingent, being the only nationality to appear in the top three groups of overseas supporters that buy tickets for each Premier League ground.

Asia remains the Premier League’s overseas stronghold. In 80 per cent of Premier League grounds, at least one of Japan, South Korea and Hong Kong appear in the top three nations for foreign fans.

At Arsene Wenger’s Arsenal, the French forign legion make up the largest fanbase of any foreign country attending the club’s games (17.1%) – a legacy, presumably, of the strong gallic influence at the Emirates in recent years.

Elsewhere, the research shows that Spain’s La Liga overseas fans hail from 19 countries. British fans (12.3%) are the most visible foreign contingent among fans visiting Barcelona’s Nou Camp, while French fans (11.8%) are the largest group that frequent the Bernabeu Stadium of Real Madrid.

The impact of two Japanese players in Serie A – Keisuke Honda of Milan and Yuto Nagamoto of Inter – is reflected in the statistics. Some 37.5% of the top 3 foreign fanbases for each Serie A club include the Far Eastern country.

Japanese fans also have a significant presence in Germany’s Bundesliga, taking top spot for international spectators at over half (55.6%) of the clubs in the league.

Thomas Mesa, UK and Ireland Country Manager at Ticketbis, said: “The pull of London as a tourist magnet, coupled with Chelsea’s record as one of the Premier League’s most successful teams, are surely underlying factors in the large share of foreign supporters at Stamford Bridge.

“The globalisation of football is also evident in these findings. While the old perception of Americans was as insular sports fans, mainly interested in their own sports, these figures show that football is on its way to breaking this final frontier and becoming the world’s game.

“Meanwhile the differences in ticket prices and the nationalities of fans attending Premier League games versus Champions League games show that each club has its own quirks and tendencies.”