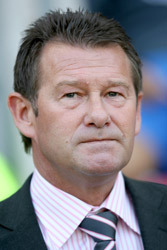 Wigan have elected to sack Chris Hutchings with immediate effect, the Premier League club has announced.

Assistant manager Frank Barlow will take over on a caretaker basis, starting with Sunday’s trip to Tottenham.

A club statement read: “Wigan Athletic have announced this morning that they have parted company with manager Chris Hutchings with immediate effect.

“Assistant Manager Frank Barlow will be taking charge of the first team on a caretaker basis, starting with next Sunday’s trip to Tottenham Hotspur at White Hart Lane.

“The club wish to put on record their immense gratitude for Chris’ efforts, in particular his contribution to the meteoric rise of Wigan Athletic over the past six and a half seasons.”

Hutchings was appointed in May following the resignation of Paul Jewell.

He also succeeded Jewell at Bradford City in 2000, but just as at Wigan he was fired after 12 Premiership games.

On Saturday Wigan were beaten 2-0 at home by Chelsea – their sixth successive Premiership defeat.

“It is crucial for our development that we maintain our Premier League status,” said Wigan chairman Dave Whelan.

“Following results and performances in recent matches we feel it is critical to act now. It is in the best interests of the club and its long-term future.

“This has been a very difficult decision for me and the board to make.

“Having been so close to the team and such a big part of our success, I felt Chris deserved to be given the chance to take over as number one last summer.

“He has worked very hard since becoming manager and I cannot fault his effort and commitment to the cause.

“This search will be exhaustive and I will not be commenting on any names or speculation until I have found the man.”