Other side of the coin

Now that it has cured itself of it’s Autumnal bout of racism, English football looks set to enter a novel period of soul searching and recrimination as it heads into the busy Christmas period.

Fans throwing objects at players is the latest concern, after Manchester Unite’s Rio Ferdinand was the unfortunate victim of a coin thrown by a supporter during Sunday’s pulsating Manchester derby.

Let’s state straight away that this was an act of stupidity for which the perpetrator deserves to be punished. Let’s also state, amid the rush to condemn, that we should limit the sanction to the guilty individuals and avoid – where possible –  the desire to embrace more draconian measures.

This brings me on to Professional Footballers’ Association chief executive Gordon Taylor who believes that it might be necessary to introduce netting around pitches to protect players.

“I think you’ve got to consider, as has been suggested, some netting in vulnerable areas,” said Taylor.

“It could be behind the goals and round the corner flags.”

Although, when you think about it, the vulnerable area of a football pitch would be the entire pitch.

FA chairman David Bernstein struck an altogether more sensible note, when he suggested the focus should be on apprehending the offender and banning him from football for life.

“In my mind it’s for the FA, it’s for the whole game of football and for the authorities to work together to deal with this in the most severe manner,” he said.

“I believe that if necessary life bans for these people who need to be caught, go to the courts and be banned for life if and when they are found out.”

Manchester City have apologised to Ferdinand who, to his credit, made light of the episode.

“Whoever threw that coin, what a shot! Can’t believe it was a copper 2p… could have at least been a £1 coin!,” he said on Twitter.

Meanwhile, a pitch invader who was prevented from confronting Ferdinand by the alert City ‘keeper Joe Hart, has apologised for his behaviour.

In a statement issued through his solicitor, Mr Stott, said: “I would like to apologise to all those affected by my actions yesterday, particularly Mr Ferdinand and the other players.

“I am extremely ashamed of my actions. I have let myself down, my family down, my fellow fans down and Manchester City Football Club.

“I intend to write personally to Mr Ferdinand to express my extreme regret and apologies and also apologise to Manchester United and their fans.

“I would like to thank Joe Hart for his actions when I came on the pitch.”

If this was an attempt to pre-empt and possibly lessen any punishment, it failed; City have removed Mr Stott’s season ticket.

Lionel Messi has finally eclipsed Gerd Muller as the highest scorer in a calendar year. As football spans seasons rather than years, this particular record is not one that many people were familiar with until quite recently. But with Messi continuing to find the back of the net with incredible consistency, it has assumed the status of the goalscorers Holy Grail. However contrived it may be, it would be churlish not to acknowledge Messi astoundingly prolific form over the past 12 months.

It was only last May that Messi set a new record for the number of goals scored in a Spanish league season (50), but if he maintains his current strike rate he is already on course to obliterate that total. His present rate, if sustained, would see him reach 58 goals by the end of the campaign.

Messi’s total comprises 56 in 36 league games, three in seven in the Cup, two in two in the Super Copa, 13 in 12 in the Champions League and 12 in nine for Argentina. He already has 23 league goals this season, which as World Soccer’s Spain correspondent, Sid Lowe, points out in today’s Guardian, would have been enough to have won the Pichichi award 26 times. He has achieved that in 15 matches! Yes, 15! Oh yeah, he has also managed 29 assists this year.

Anyway, here are all 86 of the goals scored by the Argentinian in 2012.

To err is human…

A Bundesliga referee has taken the unusual step of apologising to Borussia Dortmund for an incorrect decision in their game against Wolfsburg at the weekend.

Wolfgang Stark sent off Marcel Schmelzer for what he perceived to be a handball on the goal-line.

The German referee also awarded Wolfsburg a penalty, which they scored as Dortmund suffered a shock 3-2 defeat.

Replays later showed the ball hit Schmelzer’s legs, and Stark has since admitted he made a mistake.

“I am sorry, but it was an error in interpretation from me,” said the referee. “We have taken a look at it again in the dressing room, together with the referee observer.

“During the game, to me it seemed a clear handball on the goal-line, so penalty and red card.

“Unfortunately, the pictures speak a different language. It shouldn’t happen, but it has happened. The penalty and red card were mistakes.”

Dortmund were leading 1-0 at the time, but Wolfsburg eventually went on to claim a 3-2 victory.

Schmelzer was obviously furious at the decision at the time, as he had scrambled back to clear the goal-bound shot off the line.

Thanks, but no thanks 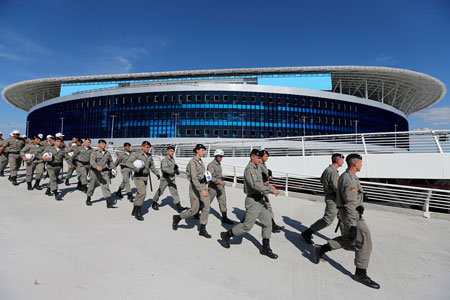 Gremio Arena before it's inaugural match.

The first of 14 new stadiums being developed for Brazil’s staging of the 2014 World Cup was officially opened on Saturday, but ironically, for a tournament whose preparations have been heavily criticised, the Arena Gremio in Porto Alegre will not actually be used during the tournament. FIFA instead opted for the Beira-Rio Stadium owned by Gremio’s arch-rival Internacional.

Gremio inaugurated its new 60,000-seat stadium with a 2-1 friendly victory over Hamburg with representatives still unsure why they were overlooked for 2014.

“That hasn’t been explained to us,” said Gremio’s vice-president Eduardo Antonini of the stadium’s absence from the list. “We are the first stadium to be ready. This city is passionate about its football and instead the Cup has gone to other places with less footballing tradition.”

Gremio’s new home has received praise from Brazil 2014 local organising committee member Ronaldo. “I’ve been in the best and most famous stadiums and the Arena is excellent,” he said. “I’ve only seen stadiums like this in Europe and this is up there with the best in the world.”

The stadium, along with Palmeiras’s new stadium in Sao Paulo, another to miss the cut for 2014,  could be used as back-up options by FIFA if any of the World Cup’s 12 host venues fail to be ready on time.

Quotes of the day, or a tale of two strikers

“My record has stood for 40 years – 85 goals in 60 matches. Now the world’s best player, Lionel Messi, has broken it and I am happy for him. Messi is an unbelievable player, a giant while also being a pleasant and rather reserved professional. I hope he scores a few more in the remaining matches of 2012 so that his record stands for another 40 years ”

“I too would get 90 goals if I were given penalties as referees give them away to Barcelona.”

I’ll leave it up to you to work out who said what.

Roberto Mancini has warned Mario Balotelli of his conduct after the striker stormed down the tunnel following his substitution in the Manchester derby defeat on Sunday.

Reigning champions Manchester City suffered their first league defeat of the season at the hands of their bitter rivals United in a eventful encounter which finished 3-2 at the Etihad.

Balotelli, who we are constantly being told, has the potential to become one of the world’s best players, was replaced early in the second half after yet another below-par – one could almost say, trademark – performance.

“I love Mario but it is important for him to start to think about his job,” said Mancini.

“He has everything to play well but he can’t continue to play like today. We wanted more from him.”

“When you have a player that has Mario’s quality, you cannot understand why he continues to throw it out of the window. It is incredible.”

And yet, throw it away he does, almost every time he sets foot on a football pitch. At what point does ‘incredible’ become ‘predictable’?

Inter’s desire to lower their wage bill has reportedly convinced them to offload Wesley Sneijder in a cut-oprice deal to Paris Saint-Germain.

The Dutchman has been told he won’t play until he signs a new contract which lowers his €6m per season wages.

According to SportMediaset, a deal has already been struck with PSG to sell the midfielder next month when the transfer window opens.

Sneijder is expected to arrive at Parc des Princes as a replacement for Javier Pastore, who has had a very disappointing start to his career in Paris.

But PSG coach Carlo Ancelotti is adamant the only arrival in January will be Brazil midfielder Lucas Moura, who has agreed to join the Parisians from Sao Paulo.

The Italian told a press conference on Monday: “The transfer window for PSG is very clear: the only arrival will be Lucas, there will not be any more.

“Sneijder has the profile to play at clubs all around the world. But that does not mean he will come here. He will not come here, that’s for sure.

“Some people may go, however.”

Of course, given the uncertainty over his own position, it’s always possible that Ancelotti will be the last to find out about any additional arrivals.

Napoli could be hit with a two-point deduction after their former goalkeeper confessed to fixing the result of a game three seasons ago.

The keeper, Matteo Gianello, was looking to plea-bargain after informing prosecutors that he attempted to fix the May 16, 2010, match between Sampdoria and Napoli.

Sampdoria won the match 1-0 with a goal from current Milan player Giampaolo Pazzini in the 51st minute. It was the final match of the season and the victory secured Sampdoria fourth place and a place in the Champions League qualifying stages.

Current Napoli captain Paolo Cannavaro and defender Gianluca Grava are also on trial in front of the Italian football federation’s disciplinary committee for allegedly failing to report the fix. Both players, along with Napoli, deny any wrongdoing.

The former manager of the South African national team has been found guilty of trying to fix a league promotion playoff game in 2011.

SAFA says he was found guilty of attempting “to unduly and improperly influence the outcome” of the game last year in Cape Town.

Sentencing was deferred until February 2013.

SAFA president Kirsten Nematandani says Setshedi’s conviction would send out a clear message that such behaviour has no place in the ‘beautiful game’.

“This is a strong statement to anyone who might intend to tarnish the good name of the sport through match-fixing or other unsporting behaviour.

“In accordance with FIFA and SAFA’s zero tolerance to corruption and match-fixing, we would like to warn other potential criminals that the long arm of the law would not spare you,” Nematandani says.

Nematandani also praises the National Prosecutions Agency (NPA) and the South African Police Services (SAPS) for their hard work in securing the conviction.