Associated Press’s in-depth investigation into match fixing today focuses on referee, Ibrahim Chaibou, the official at the centre of a number of dubious matches in recent years.

Chaibou, the man who awarded a highly contentious penalty in the 8th minute of injury time in Nigeria’s 4-1 friendly international victory over Argentina in June 2011, is interviewed over his alleged involvement in a string of bizarre matches.

Chaibou was quizzed about some of his more outlandish performances, but before the investigation was completed, he turned 45 and was forced to retire from FIFA’s approved international referee list in December 2011. That also automatically cancelled the investigation, since FIFA investigates only current referees. In effect, he got off scot-free, although it’s unlikely he’s be employed anytime soon in any footballing capacity.

You can read the latest, fascinating instalment here.

World of his own

Milan coach Massimiliano Allegri has joined the growing list of coaches who are convinced that Mario Balotelli has what it takes to become a world-class player.

“I’m really pleased with what Mario is giving us on the pitch”, the Milan coach told a press conference.  ”He has got the opportunity to become a world-class player if he dedicates himself to football. I hope that he takes on board the advice.”

And therein lies the huge caveat: Allegri is just the latest coach to highlight Balotelli’s potential, dating back to his days at Inter under the tutelage of Jose Mourinho. All have admired his talent, but crucially, none so far have managed to harness it on a consistent basis.

One fears that in the not-too-distant future, the talk will be not of a player who could become world class, but of one who could have been.

Manchester United are set to record their best ever financial figures after securing new sponsorship deals in recent months.

The Premier League leaders signed six new deals in the final three months of 2012 to boost their revenue streams by a possible 74 per cent and continue their commercial growth around the globe.

The Premier League leaders are reportedly the world’s best-supported side, supposedly boasting 650m fans worldwide, which has clearly helped them negotiate sponsorships advertising a wide range of products and services, from beer, wine, watches and cars.

Manchester United shares stand at £12.20, up from the original value of £9, meaning the club is valued at over £1.94 billion.

Say what you like about the Glazer family but they certainly know how to make money for themselves.

Cagliari have released a statement on their official website, fully supporting their President Massimo Cellino.

Well, if your paid employees can’t support you who can.

Cellino has been arrested, along with three other men, following an enquiry into the construction of the Is Arenas.

And the club have given their full backing to the President, insisting that they are all behind the 56-year-old.

“Employees, Coaching staff and players are all close to the President in this difficult time,” a statement read.

“We are confident in the work of the judicial process and believe that the investigation will show the truth.

“At this time we would like to say: President, we are with you.”

Along with Cellino, Mauro Contini the mayor of Quartu Sant’Elena, the Cagliari district where the stadium is located, was also arrested along with another local official.

They were charged with embezzelement and false representation in the rebuilding of the stadium.

Cagliari moved to the small Is Arenas stadium at the start of this season but, with only one permanent stand, they have had trouble from the off. Three temporary stands were built on the other sides of the pitch but their opening match against Atalanta was staged behind closed doors after local authorities refused to issue a safety certificate.

Their following match against Roma with the visitors awarded a 3-0 win.

Cagliari were also banned from hosting a match against Juventus in the stadium and had to switch that fixture to Parma.

Last Sunday’s game against Milan was originally set to be moved to Turin amid security worries but eventually went ahead at the stadium after a regional tribunal ruled it was safe.

Cagliari had played at the Stade Sant’Elia from 1970 until around halfway through last season but left the stadium due to disagreements with the local authorities and over growing safety worries.

The Liverpool manager, Brendan Rodgers, has insisted any abuse directed at his players by Zenit St Petersburg supporters will motivate them.

There are fears about trouble at the game in Russia and the Premier League club said before the game that they would brief their players on how to deal with any racist problems. But Rodgers is confident that any attempt to intimidate Liverpool will backfire.

“Over the last 20-odd years that a lot of work has gone into outside of football to prevent racism,” Rodgers said. “I know these are players who want to play and Glen (Johnson) is a very experienced, top international player. It is an issue these young players have experienced in their lives before.”

Indeed, it can’t have been easy for the likes of Johnson to encounter such abuse, not least when some of it emanates from his own dressing room. Despite this, he sportingly wore a pro-Luis Suarez t-shirt when his team-mate was accused of racially abusing Manchester United’s Patrice Evra. One wonders how he feels about that decision now.

“Obviously they understand and the likes of young Raheem (Sterling) has been through situations like this [in an Under-21 international in Serbia in October]. It is something which will very much unite the players.”

Zenit have a long history of racist incidents. They were fined in 2008 after fans threw bananas and made monkey chants during a game with Marseilles and again in 2011 when former Brazil international Roberto Carlos was offered a banana. One fan group recently produced a manifesto which urged the club to field only white players.

One gets the feeling that there is one Liverpool player who would feel right at home in St Petersburg.

Prowling moodily on the touchline as the camera pans to him in the immediate aftermath of Benitez’s goal is Larry David double Carlos Bianchi.

Not  so much a lookalike as a doppelganger. 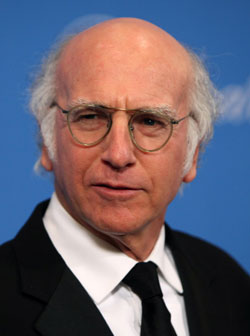 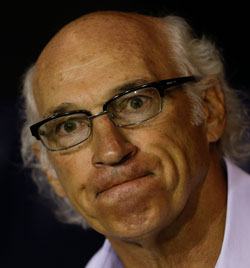 “I had three in the second half, especially the other when I hit the bar. That was a big chance, I should have put that in. I slightly mis-kicked it, I didn’t hit it properly. So with a bit of luck, it could have gone in but it didn’t.”

A candid Robin Van Persie reflects upon the several chances he missed during Manchester United’s 1-1 draw with Real Madrid.

At least five people were killed when a plane carrying football fans attempted an emergency landing and caught fire in the Ukrainian city of Donetsk.

The Antonov AN-24 plane was on an internal charter flight from the Black Sea resort of Odessa, with more than 40 people on board.

It overshot the runway at Donetsk airport. Most of those on board escaped as the plane caught fire.

Twelve people were injured. The cause of accident was not immediately clear.

The plane was carrying supporters travelling to the Champions League football match between Shakhtar Donetsk and Germany’s Borussia Dortmund.

A minute’s silence was held before the game which ended in a 2-2 draw.