FIFA’s reform process, designed to bring about proper transparency and accountability has come under fire, with one of its leading advisers accusing the organisation of watering down the original recommendations.

The reforms, upon which FIFA president Sepp Blatter has staked his reputation, were called for amid the allegations of corruption and bribery that have beset football’s governing body in recent years.

Alexandra Wrage, a Canadian member of the Independence Governance Committee set up by FIFA to make proposals to the FIFA Congress in Mauritius in May, claims FIFA’s executive committee last week neutered many of the IGC’s ideas and wants them reinstated by tomorrow – the deadline for adding items to the Congress agenda.

“The integrity checks will go forward but they have, in my opinion, been gutted,” she told the BBC. “This is absolutely critical: centralised, neutral, independent integrity checks. All three of those components are really important. And now they are decentralised and largely self-reporting.”

Wrage has even considered resigning as a result.

“I can only speak for myself but that is one of the options – there’s very little point continuing if our recommendations are not being accepted. Key provisions that are accepted in the corporate world have not been accepted here – our recommendations just seem to fall off the agenda.”

Wrage Admits she considered resigning last summer, but ultimately decided against it, when confronted with “blatant” sexism by leading FIFA figures.

Recalling an incident first reported last July, Wrage described how two senior individuals approached her and warned that two candidates suggested for FIFA’s reformatted ethics structure were unacceptable because they were women.

“They were the best names we could think of and we were very enthusiastic about them,” she recalled.

“The two executives came over and said: ‘You’re going to have to give us more male candidates because a female candidate is not acceptable.’ I said: ‘Did you really just say that to me?’ It was startling. It stopped in most settings three or four decades ago.

“I’ve worked in all sorts of countries, countries with reputations of not valuing their female employees, and I’ve not had something so startling said so directly to my face.”

You can read more of Wrage’s revelations by clicking here.

The net closing in?

No discussion about FIFA corruption would be complete without mention of the organisations’s former vice-president Jack Warner.

A fresh twist in an ongoing FBI investigation into alleged corruption in international football has emerged after investigators persuaded a key witness to cooperate.

That witness is none other than Daryan Warner, the son of former FIFA vice-president Jack Warner. The sources declined to say who might be charged, if anybody, or when.

While the exact scope of the investigation is not clear, among the matters under scrutiny are two previously reported allegations involving Warner senior, who is currently national security minister in his native Trinidad and Tobago – an island where, if the lunatics have not yet taken over the asylum, they are certainly in positions of influence.

Daryan Warner was first interviewed by the FBI late last year after flying to the United States, a US official said.

His father quit his FIFA and CONCACAF positions in June 2011 in the wake of allegations of bribery in a report by a lawyer commissioned by Chuck Blazer, a member of FIFA’s executive committee and former general secretary of CONCACAF.

The report alleged that Warner collaborated with another FIFA vice president at the time, Mohamed Bin Hammam of Qatar, to bribe Caribbean football officials so that they would back a bid by Bin Hammam to become FIFA’s president. Bin Hammam and Warner both have repeatedly denied wrongdoing.

In 2011, the confabulatory Warner told the Parliament of Trinidad: “I will hold my head high to the very end. I am not guilty of a single iota of wrongdoing.”

A police watchdog has suggested that Sir Norman Bettison, a former chief constable, could have been sacked for his actions following the publication of a damning report into the Hillsborough tragedy.

Bettison is alleged to have co-ordinated the cover-up by South Yorkshire Police about failings of senior officers at the stadium on the day of the disaster in 1989.

He would have a “case to answer for gross misconduct” if he was a serving officer, the Independent Police Complaint Commission (IPCC) found.

Deborah Glass, deputy chair of the IPCC, said: “It was the IPCC’s view at the start of the investigation, as it was the view of his Police Authority, that Sir Norman’s actions, if proven, fell so far short of what is expected of a chief constable that dismissal would be justified. “The evidence uncovered during the investigation supports that view.

“While we cannot bring this case to misconduct proceedings, we can publish the evidence and our conclusions, so that the public can judge for themselves.”

Margaret Aspinall, of the Hillsborough Family Support Group, whose 18-year-old son James was one the 96 fans who died in the disaster, said the former chief constable should be stripped of his knighthood.

She said: “In the IPCC’s own words, this was gross misconduct and, in my mind, that is a very serious offence and the fact that he resigned should not mean that this report is the end of it.

“We want to see him stripped of his honours – his knighthood and his Honorary Fellowship from Liverpool John Moores University.”

Conveniently for Bettison, he resigned last year, thus sparing himself an uncomfortable grilling and saving himself a not-inconsiderable annual pension of £83,000 a year.

South Yorkshire police’s motto is “Justice with Courage” which, all things considered, is something of a sick joke.

“We will quickly get together, then we will go straight home and from Sunday we will only be thinking about Juve. There will not even be a dinner.”

Bayern Munich CEO Karl-Heinz Rummenigge said there were no plans to celebrate should they claim the Bundesliga title this weekend.

Not for the first time fans in Argentina have caused the abandonment of a match. Here’s the police turned water cannons on supporters who were trying to get onto the pitch during the match between Unión Villa Krause and Quilmes.

A day in the life…

“It was 20 years ago today, Francesco Totti taught Roma how to play…”

Roma talisman Francesco Totti today celebrates the 20th anniversary of his debut for the club. To mark the day, his fellow players formed a guard of honour at Roma’s raining ground. Totti proceded to shake everybody’s hand and the moment was captured for posterity on video (see below).

Reflecting on his 20 years at Roma, Totti said that the only player better than him in world football is Lionel Messi.

“There is only one player who is doing things that I could never do and that is Messi,” Totti was quoted as saying by La Gazzetta dello Sport.

“I do not think there is an Italian footballer who I would place above myself in a list, though. The numbers speak for themselves.”

The forward then went on to praise Marcello Lippi, and said he would love to work with Jose Mourinho at some point in the future.

He added: “For me, Lippi is the best coach I have ever worked with. He had such incredible charisma. But Fabio Capello and Luciano Spalletti are true greats as well.

Here’s a list of records (culled from Wikipedia, it has to be said) held by the 38-year-old.

If he scores against Celta Vigo on Saturday, Lionel Messi will become the first player to score against every Spanish league opponent in consecutive order.

Messi is on a record run of scoring in 18 straight league matches. The last time Messi failed to score in the league was November 3, when Barcelona beat Celta 3-1.

Because the Spanish league season is scheduled with the teams playing each other in exact order, Messi has scored against every other team in Spain since then.

Coincidentally, to mark Messi scoring a record-breaking 91 goals in 2012, graphic artist Dave Williams has produced an original artwork, depicting each and every one of the goals (see below).

Williams is producing a limited print run of this iconic poster, with just 91 copies – one for each goal scored – available to buy.

To buy one of the limited edition posters, head to the artist’s website here. 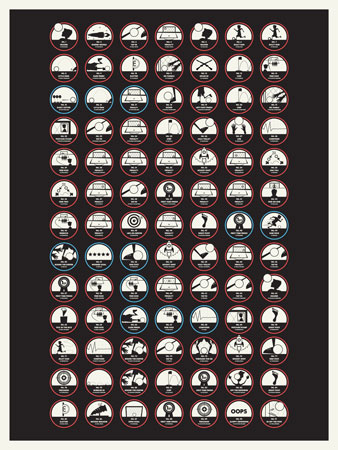 Those in red denote goals for Barcelona, those in blue, Messi's goals for Argentina. 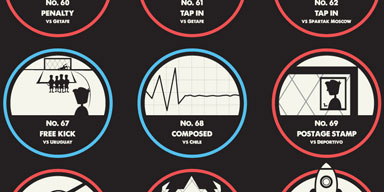 Each individual goal scored by Messi in 2012 is graphically depicted.

UEFA gets tough on racism

UEFA has recommended that referees stop matches when there are incidents of racism and says it will “fully support” them if they follow its advice.

In a resolution issued in conjunction with the European Clubs Association (ECA) and the world players’ union FIFPro, European football’s governing body reminded referees that they had been authorisied four years ago to stop matches in the event of serious racist incidents.

The resolution also called on coaches and players to speak out “even if it meant criticising their own players and fans”.

The resolution was drawn up by the Professional Football Strategy Council (PFSC) and ratified by UEFA’s executive committee, meeting in Bulgaria, on Thursday. The PFSC is composed of representatives from UEFA, the national leagues, European clubs and the players.

The resolution “recommends and fully supports referees to stop matches in cases of racism and calls on national associations and leagues to do the same”.

In 2009, UEFA outlined a three-step procedure for abandoning games.

It said the referee should first stop the match and ask for announcements to be made over the public address system. The second step would be to suspend the match for a given period of time and, finally, abandon it.

So far, no UEFA-organised match has ever been abandoned and, despite the guidelines.

The resolution also called on UEFA, national associations and leagues to provide new regulations which allow for stricter sanctions in cases of racism.

“Many countries have taken significant and successful action but such incidents are still widespread in our continent,” it added.

“(The resolution) calls on the players and coaches – namely those with most influence on the perpetrators of racist acts – to speak out, even if this may mean criticising their own fans or players.

“It expresses its full and unconditional opposition to any form of discrimination.”

An inquest into the death of Piermario Morosini during a Serie B match last year has blamed four medics for their inadequate treatment of the player.

Morosini collapsed and died during Livorno’s match at Pescara on April 14 because of a heart attack. Forensic tests later revealed he had a genetic heart disease.

The 25-year-old Morosini was on loan from Serie A team Udinese.

The three judges say the absence of a defibrillator had ”a causal role in the death of Morosini.”

They criticize the doctors of both clubs, the paramedic and the first doctor to attend to Morosini upon his arrival at the hospital.

Despite being transported to the hospital, Morosini never regained consciousness. An autopsy found an undiscovered congenital heart defect was to blame for the 25-year-old’s sudden death.

The inquest suggests that the medical staff of both clubs and the ambulance crew in attendance, did not use the defibrillator at any point, resulting in the player’s death.

The instrument was only used once Morosini had arrived at the hospital, but his chances of survival were negligible by that point.

Since Pescara were at home, the team’s medic should have accessed the defribilator, while ambulance driver Vito Molfese bore the brunt of the criticism as he did not check whether one had been used while continuing to ignore the one located in his vehicle.