Real Madrid coach Jose Mourinho has spoken of the problems he endured when in charge at Inter trying to control maverick striker Mario Balotelli.

In an interview for CNN with World Soccer’s Portugal correspondent, Pedro Pinto, Mourinho provided a fascinating and entertaining insight into the way Balotelli’s mind worked, or more often than not, didnt work.

He said: “The most problematic players were funny. Mario was good fun.

“I could write a book of 200 pages of my two years in Inter with Mario, but the book would not be a drama, it would be a comedy.

“I remember one time went to play Kazan in the Champions League. In that match I had all my strikers injured. No Milito, no Eto’o, I was really in trouble and Mario was the only one.

“Mario got a yellow card in the 42nd minute, so when I go to the dressing room at half-time I spent about 14 minutes of the 15 available speaking only to Mario.

“I said to him, ‘Mario, I cannot change you, I have no strikers on the bench, so don’t touch anybody and play only with the ball. If we lose the ball no reaction. If someone provokes you, no reaction, if the referee makes a mistake, no reaction.’

Who wants to be a millionaire?

The annual list salaries paid to MLS players has been published and it shows that of the 12 players earning at least a million dollars, 3 arrived during the 2012 season.

Another three of the 1millionaires club are out for the season: Torsten Frings and Danny Koevermans (both Toronto FC) and Kris Boyd (Portland).

The New York Red Bulls have three of the four highest players in the league, according to newly-released salary figures provided by the MLS Players Union , with Thierry Henry the best-paid player, followed by team-mates Rafa Marquez and new arrival Tim Cahill. While those three get by on multimillion dollar salaries, there are several squad players at New York struggling to get by on just $33,750.

There were several candidates for Goal of the Dat at Anfield, but we’ve opted for Giovanni Pasquale’s thunderous strike, not least because of the skilful hold-up play and assist provided by Antonio Di Natale.

Case for the defence

That’s his defence by the way, and not as you may have thought his defending.

In a 63-page ruling, The FA regulatory commission found that there was “no credible basis” for Terry’s defence that he was merely repeating back to Ferdinand the phrase “fucking black cunt” in the belief that the QPR player had accused him of racial abuse.

In which case, and when placed in the context of Luis Suarez’s eight-match ban for a similar offence, a four-match ban appears somewhat lenient. However, as the report makes clear, there were mitigating factors which worked in Terry’s favour.

One of them, quite bizarrely was: “When he gave evidence at a preliminary hearing, Sir David Richards, the Chairman of the FA Premier League, testified as to Mr. Terry‟s generosity when asked to contribute towards charitable causes.”

You can click here for the full written Reasons.

“Hahahahaa, well done #fa I lied did I, #BUNCHOFTTWATS”

Ashley Cole’s reacts to the FA’s damning verdict on the evidence he provided on behalf of John Terry. The tweet has since been removed, though the controversy is expected to linger for a while yet.

No sooner had Cole’s tweet been deleted, the Chelsea defender, perhaps mindful that he is supposed to be on international duty next week, was issuing a hastily concocted apology.

“I had just finished training and saw the captions on the TV screens in the treatment rooms about what was said in the FA commission ruling about me.” it read.

“I was really upset and tweeted my feelings in the heat of the moment. I apologise unreservedly for my comment about the FA.”

Cole is due to report for England duty next week, thus providing a fresh headache for coach Roy Hodgson, who is currently preoccupied in extricating himself from Tubegate. The Chelsea defender has won 98 caps for his country, but the chances of him adding to that total will depend upon the FA’s capacity for forgiveness.

Udinese president Giampaolo Pozzo says his side’s Europa League victory over Liverpool was one of the greatest evenings of his career.

“It is very satisfying to win at such an historical venue. This is not something that happens every day…”

Three home defeats in a row this season would appear to suggest that it does but, to paraphrase Ashley Cole, one can understand why in the heat of the moment Pozzo got carried away.

“After 27 years in this game, it is one of the most beautiful sporting days that I can think of.”

Udinese coach Francesco Guidolin described the result as “a magical evening that gives us a real boost in terms of results and confidence”.

“It is a moment of great joy for our big family, because that’s what we are at Udinese,” he told Sky Italia.

“All of us – players, fans, coaching staff and club are a big family and we wanted to do well here against an important team like Liverpool.”

Don’t all laugh at once.

For Liverpool boss Brendan Rodgers this was another sobering night of contemplation. As mentioned, a third successive home defeat, albeit with a weakened team and one that again passed the opposition off the pitch. Liverpool completed 691 passes tonight, nearly four times as many as Udinese (173), which proves once again that one shouldn’t read too much into such statistics.

“We concede goals too easily,” Rodgers said afterwards. “It’s an area we have to work on.

“We were very good in the first half but we lost concentration and became lazy and found ourselves 3-1 down. We can’t have to score three, four or five goals to win games

The result leaves the Premier League club third in Group A, a point behind Udinese and Russian side Anzhi Makhachkala after two games.

“For us it is important to qualify of course, but it is also an opportunity to give some of our younger players a chance,” said Rodgers, sounding like a man searching for a get-out clause. 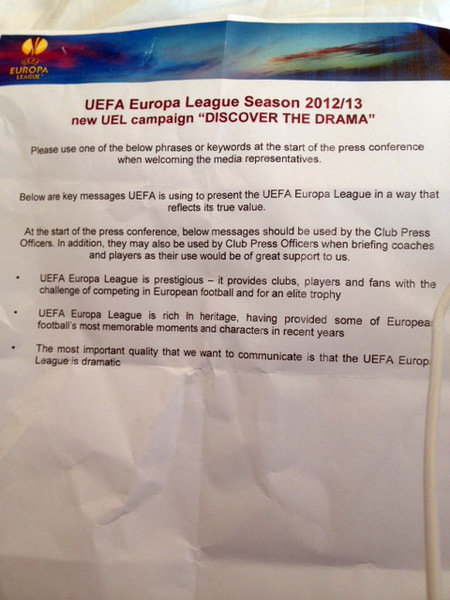 A few more matches like the Anfield game and UEFA might not need to resort to artificial means to promote it’s secondary competition.

The Press Association found a UEFA prompt sheet left lying around at Panathinaikos’ Europa League match against Spurs on Thursday encouraging club press officers to enthuse about the competition to visiting journalists.

Promoting a new campaign called “Discover the Drama,” the memo is an attempt to stimulate interest in a competition which is floundering in the comparison to flagship Champions League.

“Please use one of the below phrases or keywords at the start of the press conference when welcoming the media representatives,” it states.

“In addition, they may also be used by Club Press Officers when briefing coaches and players as their use would be of great support to us,” it requests.

Then there are three “key messages” that will help promote the competition.

“UEFA Europa League is prestigious — it provides clubs, players and fans with the challenge of competing in European football and for an elite trophy.”

“UEFA Europa League is rich in heritage, having provided some of European football’s most memorable moments and characters in recent years.”

“The most important quality that we want to communicate is that the UEFA Europa League is dramatic.”

It would be funny, were it not so pitiful.

The Argentine FA (AFA) insulted fans by trying to stage Wednesday’s friendly against Brazil in a small, provincial stadium that was cancelled by a floodlight failure, said Brazil coach Mano Menezes.

The stadium, which has a capacity of 35,000, is the home of Sarmiento de Resistencia who play in the Torneo Argentina B, the fourth tier of Argentine football. A strange choice indeed and one the AFA is unlikely to repeat.

“I haven’t experienced anything like this for a long time, the last time was probably with a junior match in the interior of Rio Grande do Sul (state),” Menezes told the Estado de Sao Paulo newspaper in an interview.

“Football’s image has been damaged…the supporters are the most important part of the game and they were disrespected by the Argentine Football Association’s (AFA) decision to take the game to a stadium which didn’t offer conditions for a game of this standard.

“It’s not right to submit the visiting team to a situation like this and, obviously, you shouldn’t subject the fans to waiting for a game that never happened.”

Former Cologne and West Germany forward Dieter Muller has suffered a heart attack, third division Kickers Offenbach, the club where he was president for 12 years, have confirmed.

Reports in Germany suggest the 58-year-old is in a coma.

Muller played 326 matches during eight seasons with Cologne, scoring 231 goals. He was the Bundesliga’s leading scorer in 1976-77 with 34 goals and the following season with 24 when they won the title.

Playing in the era of his namesake, Gerd, Muller made just 12 appearances for West Germany but scored nine goals, including a hat-trick in a memorable European championship semi-final against Yugoslavia in 1976, when they came from 2-0 behind to win 4-2 after extra time.

Mueller began and ended his playing career with Kickers Offenbach.