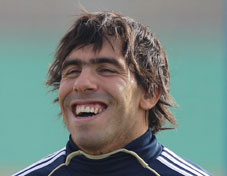 Carlos Tevez will not be moving to Corinthians. The club confirmed that they have withdrawn their offer to buy the Manchester City striker, after the deadline for Brazilian clubs signing overseas players passed on Tuesday. Surprised that no one saw that coming

In a statement, Corinthians said: “The board of Sporting Club Corinthians hereby officially announce the impossibility of hiring the Argentine striker Carlos Tevez.

“While acknowledging the efforts of Manchester City and all involved in the negotiation, more time is needed for the transfer to be achieved, given that the window to sign players from abroad closes on Wednesday, 20 July.

“We are aware of the dream our fans had of having this player at Corinthians again and we look forward to him being with us in the near future.”

The statement hints at a renewed bid for Tevez in January, a scenario that would condemn the Argentinian to spend a few more months of misery in Manchester. Poor lamb.

Uruguay have reached the final of Copa America for the first time since 1999. A 2-0 win over Peru, courtesy of two goals from Luis Suarez – the second of which can be seen below – took Oscar Tabarez’s side into Sunday’s final.

Sticking with the Copa America theme, Diego Maradona has said that were he Argentina coach, Sergio Batista, he would have resigned following the side’s early Copa America exit.

“If I had only beaten Costa Rica, (Argentina’s sole Copa success) I would have gone of my own accord,” Maradona told Radio Belgrano.

Oddly enough, 12 months ago, after Argentina had been knocked out of the World Cup at the same stage in humiliating fashion, Maradona refused to resign and left under a cloud, ranting about Julio Grondona, the president of the Argentine Football Association (AFA) and Carlos Bilardo, the AFA General Manager.

“Grondona lied to me. Bilardo betrayed me,” the ever-melodramtic Maradona raged at the time.

The Portuguese, famed for his thoroughness and organisation, has shown that he also has a good sense of humour by asking the likes of Terry and Ashley Cole to become role models.

“He expects us to be social role models,” Terry revealed. “Everyone is aware of what is expected of us and we will make sure we stay within the guidelines.

“The details of our conversation will stay between him and me, but he spoke about people being late and stuff like that. The boss doesn’t need to stand there and check what time the players come into training. But he has the authority to do so.”

Villas-Boas will be relieved to hear that.

In case anyone wonders why Terry is often perceived to be at odds with whoever happens to be managing the club, the Chelsea skipper was happy to shed some light.

“Everyone knows my ultimate aim is to become the manager one day,” he said.

German striking legend, Gerd Muller, went missing for a total of 15 hours during a Bayern Munich training camp in Trento, according to reports from Italy and Germany.

Muller, one of the most prolific goal scorers of all-time, has been employed by Bayern as a youth coach since overcoming his addiction to alcohol.

Muller left the team hotel in Trento at 3am and when he did not return, the Bayern Munich officials decided to call the police, who found him at 6pm, in a confused and disoriented state, with no recollection of what had happened.

One wishes him well, but just to be on the safe side, it might be an idea to empty the mini bar.

At long last it looks there is light at the end of the Cesc Fabregas transfer-to-Barcelona tunnel. Arsenal have agreed to speak with the European champions, while the Spanish club’s coach, Pep Guardiola, has given his clearest indication yet that he wishes to sign the player.

“There is a sum of money in the strong box set aside for this signing but if it doesn’t work out it will be kept in the box for something else,” conceded Guardiola. “We will fight to the end to try to get Cesc because we believe he will improve the team and the squad.”

The Spanish side are keen for relations between the two clubs to remain cordial, which makes a lot of sense considering Arsenal are swiftly evolving into one of their feeder clubs.

The Barcelona sporting director, and former goalkeeper, Andoni Zubizarreta, apparently with a straight face, claimed: “The position towards Arsenal is one of maximum respect because the club own the player…our position is to try and see eye-to-eye [on a deal], creating proposals that may be of interest, while always maintaining the maximum respect. We don’t have a style of doing things by force.”

Not by force, but by stealth.

The Turkish Football Federation has postponed the Turkish Super Cup final between Fenerbahce and Besiktas because both teams are implicated in a match-fixing probe.

The match had been scheduled for July 31, but has now been postponed indefinitely, presumably to give all parties sufficient time to make their bribes.

The start of the new league season, set for August 5, may also be delayed, as Federation president Mehmet Aydinlar assesses all the evidence of alleged match-fixing.

Manchester City, who by their own lavish standards have been relatively quiet in this summer’s transfer window, are reported to be considering making a move for Roma midfielder Daniele De Rossi.

This reminds me of the tale – possibly apocryphal – of Seth Johnson’s move to Leeds United in 2001. Leeds, for younger readers, were the footballing equivalent of the credit crunch before that term even existed.

Johnson and his agent agreed in advance to hold out for £15,000 a week from his new club. Leeds Chariman Peter Risdale began negotiations with: “We are willing to pay you £25,000 a week”. The astonished agent replied: “Well that wasn’t quite what we were expecting”. Ridsdale immediately left the room to consult with then-manager David O’Leary and on his return, said to Johnson: “Right, £37,000 a week is my final offer.”

Having spent the best part of half a century obsessing over whether a ball crossed the line, it’s perhaps no surprise that England would be pioneers when it comes to introducing goal-line technology.

The Premier League has invested in Hawk-Eye ball-tracking system and now awaits FIFA’s rule-making body to approve the new technology.

England’s Premier League  chief executive Richard Scudamore, says: “The technology is available, it is the fairness that is important and the Premier League would introduce it tomorrow if it could.”

In a document being distributed to legislators on Wednesday, Scudamore added: “Now FIFA is constructively engaged we are hopeful the 2012-13 season is a realistic aim.”

Franck Ribery evidently has a high opinion of himself. Discussing his form in recent years, the French forward believes that he deserves comparison with Lionel Messi.

”In my first two years [at Bayern], the level I played at was really incredible,” the modest Ribery told Bild. “Messi has shown, however, that he can do it for three, four years in a row,”

”I have worked with his team-mates; [Eric] Abidal has told me a lot about Messi’s game. He told me that Messi’s mentality is outstanding, he is always relaxed.

”If I can get fully fit again and am free in my own head, while having a good relationship with the coach, if this base is right then I can reach the level of Messi. This is for me without question.”