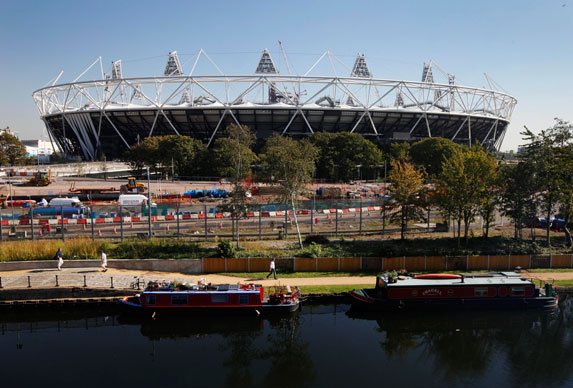 West Ham United vice-chairman Karren Brady says the club still want to move to the Olympic Stadium in 2014, despite being told that they could no longer own the arena.

The Championship side looked to have secured a move to the venue following the London 2012 Games. But the stadium will now remain in public ownership. The Olympic Park Legacy Committee (OPLC) decision has come after concerns were raised about whether legal challenges made by rival clubs, Tottenham Hotspur and Leyton Orient, would put the future ownership of the stadium at risk.

West Ham have released a joint-statement with Newham council saying they would ‘welcome’ a new process.

“Our bid is the only one that will secure the sporting and community legacy promise of the Olympic Stadium – an amazing year-round home for football, athletics and community events of which the nation could be proud.

“The true legacy of London 2012 will be the creation of jobs and a generation of young people inspired by sport based around a community home for all by 2014. We remain committed to help deliver that legacy promise to the people of London and the nation.”

No, the true legacy of London 2012 will be a huge retail development on the site where West Ham’s current ground, Upton Park, now stands. Not to mention the billions of pounds spent improving transport infrastructure to the Olympic venue. No wonder West Ham continue to be so committed.

UK Sports minister Hugh Robertson added: “This is not a white elephant stadium where no one wants it, we have had two big clubs fighting tooth and nail to get it.

“The new process will be more like how Manchester City took over the Commonwealth Games stadium which is regarded as a leading example of how to do it.”

So much for the athletics legacy then; when Manchester City took over the stadium they were given the choice of spending £60million to keep the running track or £30million to get rid of it. Guess which option they chose?

Republic of Ireland coach Giovanni Trapattoni attempts to hoodwink opponents Armenia over his team selection for Tuesday’s Euro 2012 qualifier, were scuppered by Robbie Keane’s desire for a pint.

Trapattoni has been claiming in public that Keane was in contention for a place despite struggling with an adductor muscle injury. In fact, the injury had ruled Keane out and he is unavailable for tonight’s match.

Having been released from the squad, the LA Galaxy man did what all responsible sportsmen carrying an injury would do: he headed straight for the nearest pub where he got on stage to sing karaoke.

Egypt has pulled out of hosting the African men’s Olympic qualifying tournament.

The eight-team competition was due to be played in Cairo from 26 November to 10 December, with the top three teams qualifiying for London 2012. However, given the recent unrest in the country, combined with forthcoming parliamentary elections, Egypt has informed the Confederation of African Football that it will be unable to host the Olympic qualifiers.

The South African Football Association (Safa) has officially filed a protest letter to the Confederation of African Football (CAF) following their failure to qualify for the 2012 Africa Cup of Nations (Afcon) finals.

Bafana Bafana thought they had reached next year’s finals as they topped their qualifying group on goal difference. However, CAF rules state that when teams finish level on points points, a greater number of points obtained in the matches between the concerned teams will determine the group winner. In this case, that meant that Niger topped the group, while South Africa, ponder what might have been if only they had read the rule book.

“They interpreted “between” to mean between South Africa and each of the teams tied on points with them,” he said.

“Based on that, it was the technical team’s thinking that Bafana Bafana only needed a draw to qualify; hence they played for a draw in the closing stages of the match.”

A quick phone call to CAF headquarters would have clarified the rule, but no one at SAFA had the foresight to do this.

Nigeria striker Osaze Odemwingie has blamed the prediction of Prophet TB Joshua for his country’s failure to qualify for next year’s Nations Cup. Well, it makes a change from …

Nigeria were held to a 2-2 draw in Abuja to finish second in Group B with 11 points, three points behind Guinea.

Osaze said the prediction of Prophet Joshua put pressure on the team.

“Yes, I would say I am sorry to Nigerians for not playing according to expectation and I believe I did not play well in the match. But the prediction of Prophet TB Joshua really affected us.

“We thought we could see him and see how he could overturn the negative prediction but the officials came with another prophet who prayed for us and told us that all was well.”

Apparently, God, at a bit of a loose end last week, told the prophet that Nigeria were in trouble.

“I was just sitting down and God showed me the game between Nigeria and Guinea next week,” Joshua stated on Sunday 3rd October. “What I saw was not favourable towards Nigeria. If at this time we are stopped, it would be very shameful.”

All in all, it’s not been the best of weeks for those who would like to see African football taken more seriously.

Not the goal of the day

Alondras were playing an away at Pontevedra in Spain’s 4th division when Fran Fandino scored a looping header into the top left hand corner of the net. The ball is clearly seen passing the line and emerges through a hole in the net before bouncing in to the stands.

However, referee Garcia Parada waves play on and to add insult to injury, Pontevedra score a late goal to win the game 1-0.

Jurgen Klinsmann walked into the dressing room after his first win as United States coach.

“It was quiet,” DaMarcus Beasley recalled. “And then Klinsmann went over to the iPad machine and turned on the music. That’s the kind of coach he is. He’s very cool. He’s fun.”

“He’s different, but good different,” Beasley said. “He’s always full of life. He’s always laughing. He’s always smiling. He’s very energetic, even in meetings. You can tell that he’s happy to be here, happy to be the coach of the national team. I just think his persona will kind of rub off on us and give us that fight and that passion, the same how he played when he was a player.”

In many ways, Klinsmann and the United States are a perfect fit: he, the great exponent of the powers of positive thinking; they, the only country to take that kind of guff seriously.

Tip for the top

Beckenbauer hailed “the super work” being carried out by Platini as UEFA president where the Frenchman “makes a great effort and gets his ideas across”.

“I think he’ll (Platini) be the next FIFA president. Sepp Blatter will finish by no longer being a candidate because of his age,” he added.

Beckenbauer also offered his support to Platini’s Financial Fair-Play project adopted by UEFA last May, designed to crack down on debt-laden clubs.

“I hope that it will be enforced. It’s time for a serious clean up,” he said. “I hope that Michel Platini will take the appropriate action. Progress is not without risk. Numerous clubs in Italy, Spain and France are wiped out and depend on donations.”

Germany, where clubs must balance their books, stand to gain more than most by the proper implementation of Platini’s plans.

The boy from Brazil

FIFA must not be allowed to bypass Brazilian law when it stages the 2014 World Cup, former Brazil striker Romario, has stated.

The 1994 World Cup winner, now a federal Congressman, has entered the dispute between the World Cup hosts and the football’s governing body. Romario said that Brazilian laws which guarantee half-price entry to football matches for the elderly and ban on alcohol in stadiums should not be swept away for FIFA’s benefit.

“If FIFA is not put in its rightful place, FIFA will soon have more power than our president and the World Cup will be the way FIFA wants it and not the way we should do it,” Romario said.

“They have to respect the laws for old age pensioners, supporters and students. FIFA has to understand that things have changed.

“According to FIFA’s calculations, they would lose 180 million real ($101 million) with the half-price entry.

“We don’t have to pay this. FIFA could earn a little bit less so that the Brazilians can take part.”

For a politician, he remains endearingly naive.

Zambia qualified for the African Nations Cup finals on Saturday following a goalless draw with Libya.

No reason was given for his removal, although the player power may have played a part.

Speaking on condition of anonymity, players told the Lusaka Times that Bonetti only held single training sessions before big matches and was guilty of poor team selections.

“It will be a disaster to go with coach Bonetti to the Africa Cup,” one player said. “The truth must be told that Zambia’s qualification is not because of him but it is because of the collective efforts of us players. After realising that the coach was not taking us anywhere, we took it upon ourselves to ensure we qualify.”

“I’m happy and our record in the last 15 games speaks for itself, one of the best in Africa,” Bonetti said. “I enjoyed working with this team. We contributed positively and we have worked very well. Nobody can discount this. I want to stay happy and leave with fond memories of my time here.”

Probably best not to speak to some of your former players then.