Stories we couldn’t make up 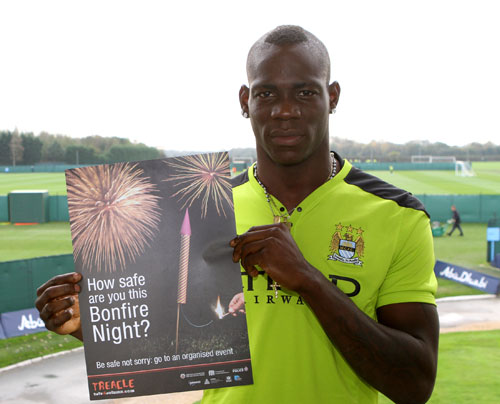 Former France international footballer Tony Vairelles has been arrested, along with three others, on suspicion of attempted murder following a shooting in a nightclub in the early hours of Sunday morning.

According to police, Vairelles, 38, was with a group that was thrown out of the nightclub in Essey-les-Nancy at around 3am for drunken behaviour.

The group then returned to the venue and used baseball bats to attack doorstaff, who responded by spraying tear gas, before one man opened fire on security personnel with a rifle. Two were injured, though none seriously.

Vairelles won the French title with Lens in 1998 and with Lyon in 2003, and won eight caps for the French national side.

A statement from the club read: “The club and its board of directors would like to thank Sven and Derek for the contribution they have made to Leicester City during their 13 months at King Power Stadium.

Eriksson has enjoyed a long and varied spell in football management, but as you can see from the following résumé, his career does appear to be heading in a downward trajectory.

So, where next for the Swede? Few coaches play the media quite so adeptly as Eriksson, so it came as no surprise to see that he’s already been linked with Blackburn Rovers, whose current boss Steve Kean seems to be living on borrowed time. Failing that, he could follow in the faltering footsteps of his former girlfriend Nancy Dell’Olio and accept a career-reviving appearance on the next series of Strictly Come Dancing. I wouldn’t rule it out.

Bojan Zajic opened the scoring for Valerenga in their 2-1 defeat to Aalesund with a curling effort from outside the box.

Brawl of the day

The Bucharest derby between Steaua and Rapid may have been a goalless draw, but it was rarely dull and occasionally exciting, especially when when all 22 players decided to have a scrap.

Signs that MLS is beginning to gain a toehold in the American sporting consciousness comes with the publication of the attendance figures for the recently-finished 2011 regular season.

Seattle’s average of 38,496 gives it the highest attendance for the third successive season and sets a record for all-time highest season attendance average in the league.

The figures are pretty respectable and when compared to Europe, don’t look too bad at all. Only Germany, England and Spain enjoy significantly higher average attendances, whileestablished leagues like Greece, Portugal and Turkey will be envious of the numbers passing through the turnstiles at MLS games.

Stats lovers among can fill your boots comparing the average historical attendances across Europe at this useful site.

End of an era

Steve Nicol has parted ways with Major League Soccer’s (MLS) New England Revolution after 10 years with the club and four trips to the championship game.

The Revolution, who failed to reach the playoffs in the past two seasons, have ended what was the longest-serving coaching tenure in the North American league.

“We all agreed a change of direction was needed to reverse the trend of the past couple of years,” Jonathan Kraft, the Revolution’s investor/operator, said in a statement.

“I’m very thankful to the Krafts for giving me the opportunity to be their head coach,” Nicol said.

“I’ve had some great times and been involved with some great players and great people. My family will always remain part of the Kraft family.”

Neymar was outshone on Sunday night in front of a live audience in Rio, when he went head-to-head with renowned football freestyler, Arnaud “Sean” Garnier.

The Santos teenager was judging the finals of the Freestyle Championship when he was beckoned on stage and encouraged to strut his stuff with the tournament victor.

New man at the helm

Bulgaria have been looking for a new coach since the departure of German Lothar Matthaus, who added to an already groaning weight of evidence that coaching might not be for him, by leading the country to their worst ever performance in major tournament qualifying.

Details are beginning to emerge of the final hours of the life of deposed Libyan dictator, Muammar Gaddafi.

According to a report in today’s Daily Mail, Gaddafi spent his final moments sipping tea from a Liverppol FC mug which, if nothing else, shows there is some truth in the club’s claim that they have a player on the global stage. Critics would no doubt point out that as a deluded, paranoid personality who relied on past glories to sustain him, Gadaffi was uniquely qualified to be a Liverpool fan.

The news of his allegiance may come as a shock to fans of Liverpool’s rivals Everton, who had claimed the dictator as one of their own, after the club toured the North African country in the 1970s.

A report on the Daily Mirror earlier this year claimed the tyrant was an Everton fan.

“Gaddafi’s love of the Toffees is said to have begun when Everton visited Libya on tour in 1979. The dictator was so impressed he immediately changed the Libyan national side’s kit to all-blue, and rewarded each of Gordon Lee’s side with a luxury Arabic carpet.”