UEFA president Michel Platini has broken the unspoken rule about criticising David Beckham, by stating the LA Galaxy player is in decline and that Paris St Germain should forget about signing him.

Beckham, 36, is out of contract next month and is a target for PSG. But Platini has questioned whether Beckham still has what it takes to flourish in Ligue 1.

“Beckham in Paris will certainly be good for shopping,” Platini said. “I love this player but he is not the footballer he was. And if he comes to Paris now it will be to do something other than football.”

Since 2007, when he moved to LA, it has had nothing to do with football.

You’ve got to admire his nerve

Carlos Tevez may sue Manchester City manager Roberto Mancini for defamation of character, according to representatives of the Argentine striker.

City fined Tevez four weeks wages – about £1m – for what they say were five separate breaches of contract in a game against Bayern Munich.

The breaches, as listed on the Manchester City website, were:

1. An obligation to participate in any matches in which the player is selected to play for the club when directed by a Club official.

2. An obligation to undertake such other duties and to participate in such other activities as are consistent with the performance of the player’s duties and as are reasonably required of him.

3. An obligation to comply with and act in accordance with all lawful instructions of any authorised official of the Club.

4. An obligation to observe the statutes and regulations of FIFA and UEFA, the FA Rules, the League Rules, the Code of Practice and the Club rules, including but not limited to breach of Rule E3(1) of the FA Rules (obligation on the player  all times to act in the best interests of the game and not act in any manner which is improper or which brings the game into disrepute).

5. An obligation not to knowingly or recklessly do anything or omit to do anything which is likely to bring the Club or the game of football into disrepute or cause the player or the Club to be in breach of the Rules (as defined in the contract) or cause damage to the Club.

Tevez and his advisors believe that none of reasons given is correct, and that Mancini’s claim immediately after the game that he refused to play could therefore equate to defamation.

However, given Tevez’s recent behaviour, surely the only way that Mancini could have slandered him would have been to describe him as a model professional.

FIFA’s month of the long knives continues with the announcement that 10 more Caribbean football officials are to be investigated over the cash-for-votes scandal.

In July, the ethics committee ruled that FIFA presidential candidate, Mohamed Bin Hammam, had offered cash gifts of $40,000 to each of the 25 CFU chiefs at a special meeting in Trinidad on 10-11 May.

Four members of the Caribbean Football Union (CFU) were banned on 14 October.

After seeing his penalty saved, Liviu Antal fired home an acrobatic overhead-kick to secure a 2-1 win for Otelul Galati in their Romanian Cup tie against Targu.

FIFA has made a significant concession in its bid reach agreement with the Brazilian government for the staging of the 2014 World Cup, by allowing those over the age of 65 to buy half price tickets for the event.

Traditionally, there has been more chance of Sepp Blatter opening the FIFA books for public scrutiny than there would have been of his organisation agreeing to a cut in revenue, so this compromise represents a coup of historic proportions for Brazil.

“We won’t say that we are above laws and regulations,” said Valcke.

FIFA, it’s true, tends not to be above the laws, but it does subvert them for the duration of the World Cup. For instance, one of its demands is that the entire tournament should be a tax-free affair  for FIFA. In effect, tax payers money is used to build stadiums for the event, while the untaxed profits largely go to FIFA in Switzerland.

There was a lengthy delay during Santa Fe’s 4-1 Copa Sudamericana win over Botafogo, when a dog invaded the pitch.

The intruder managed to evade all attempts at capture and led the players and officials a merry dance. One steward used the novel technique of waving a red bag in the dog’s face. Presumably, on the basis that if it upset bulls, then it would work on all four-legged creatures.

In the end, the dog got bored of the chase and returned to his place in the stands.

Discontent in the camp?

According to Spanish TV programme Punto Pelota Real Madrid coach Jose Mourinho and club captain Iker Casillas did not speak for a month.

You’d imagine that such a rift must have been caused by a serious breach of discipline by the goalkeeper, but this being Mourinho, you won’t be too surprised to discover that the source of the feud was an attempt by Casillas to improve relations with arch-better rivals Barcelona, via a conversation with his Spain team-mate Xavi.

Subsequently, it appears an uneasy truce between the pair was negotiated by club President Florentino Pérez.

Radio stations in Spain have announced they will sue clubs that deny them access to stadiums to broadcast La Liga games.

Money being tight, the Spanish clubs are demanding payment for allowing the stations to transmit live commentaries. For their part, the Spanish National Radio group of stations insist the fee required by the the Spanish League violates the right to information of the millions of listeners.

The dispute has been dubbed the ‘radio war’ and with the matter now in the courts, the stations argue that they should be allowed to broadcast until a decision has been made. Refusal to admit them will result in the clubs being sued.

Giantkillers go out with a bang 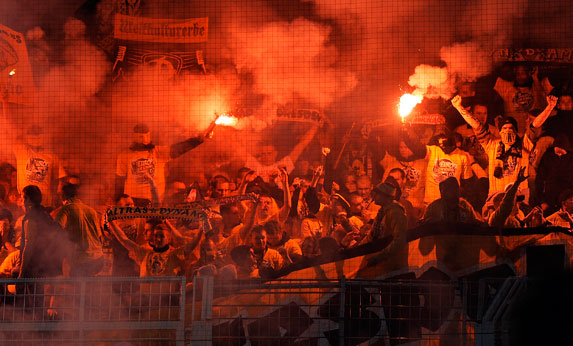 Dresden fans let off flares, which caused the referee to halt play during the German Cup tie at Borussia Dortmund.

German champions Borussia Dortmund knocked Dynamo Dresden – conquerors of Bayer Leverkusen in the first round – out of the German Cup on Tuesday, although the match was overshadowed by trouble before, during and after the game..

The kick-off had been delayed by 15-minutes after rioting Dresden fans clashed with police outside the Dortmund stadium, which resulted in 15 casualties.

More than 10,000 fans travelled from Dresden and the referee had to stop the match several times to deal with fireworks burning on the pitch.

Worryingly, the clashes came on the same day that German police reported the number of people injured in violence at games in the two top divisions reached a 12-year-high last season.

From Russia with love

Anzhi Makhachkala striker Samuel Eto’o said he is not bothered what other people think and that he deserves to be the highest paid player in the world.

“I think all of us want to work and get paid what we are worth. Anzhi made an offer, which was at the same level as my talent, and they are paying me what they think I am worth,” he said modestly.

“To be honest a year ago I had no idea I would be here. The opportunity hadn’t arisen. But when the offer came in, I thought about it and realised that it was the best one for myself, my career and my family so I went for it.”

Eto’o believes the future of football will be in Russia and that more big-name players will continue to move there over time.

“I have to tell you that practically every day I get a message or a phone call from a high-profile player who wonders whether there are opportunities to come here because the truth is the future of football is in Russia,” he added.

Whether Russia can continue to attract big name players remains to be seen, although the lure of the country will not have been helped the news that Spartak Moscow coach, Valeri Karpin, has been carjacked and robbed of 200,000 Russian rubles.

Interfax news agency reports the attack happened on Tuesday night while Karpin was inside his car talking on a mobile phone.