Carlos Tevez is to hold talks with Manchester City today at a secret location. One hopes that the club has informed the player of the venue; even when he knows where he’s supposed to be he can’t be relied on.

The striker was suspended for two weeks after City boss Roberto Mancini claimed he would not play as a substitute in their Champions League game last week. The manager’s response was emphatic: Tevez was finished at the club.

The Argentinian will claim that he only refused to warm up on the touchline as he had already done so moments earlier, although in a post-match TV interview he undermined that defence by admitting that he did not want to play because he was not right mentally.

No doubt much of his defence will rely on the words ‘lost in translation’, doubtless too, the principal beneficiaries of the saga will be the lawyers.

Adel Taarabt walked out of Craven Cottage after he was subbed at half-time in Fulham’s 6-0 win over QPR. The Moroccan was last seen outside the ground, wearing his tracksuit, waiting for a bus. And who said that modern footballers had lost touch with the supporters?

Taarabt had his photo taken with fan Kerry Smith, a QPR fan, who posted the picture on Twitter.

She tweeted: “It was bizarre! He spoke briefly. He just asked what the score was and we heard another goal go in and he just rolled his eyes!

“His minders were kind of stopping him from talking. I didn’t see him take other photos. He was ushered on when more people came out of the ground.”

“That’s not my problem. I’ve no idea. I’ve got more worries than individuals at the moment.

“I don’t think you can blame Adel Taarabt today. You’ve got to look at why we conceded six goals.

“You’re going to get days when Adel throws his toys out the pram. If you’re not bothered about being subbed . . . I’d rather have players like that, me.

As a reward for winning 10 of their last 11 matches Bayern Munich’s players were allowed to visit to the city’s world famous Oktoberfest on Sunday.

Manager Jupp Heynckes, who also attended the annual beer festival, said he trusted his players to behave themselves at the event which is attended by millions each year.

“The players deserve it,” said Heynckes. “They are absolutely professional. They know exactly what they can do and what they shouldn’t do.”

Unlike their English equivalents who would have transformed the occasion into a private lap dancing club, the Bayern players sensibly brought their wives along to the event.

All the players and their partners wore traditional Bavarian costumes, although as the photos below indicate, this is a look that suits the wives much more than their husbands. 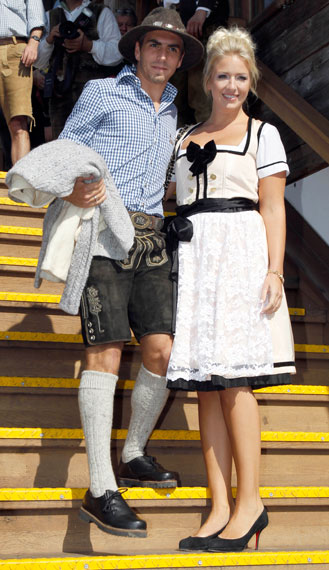 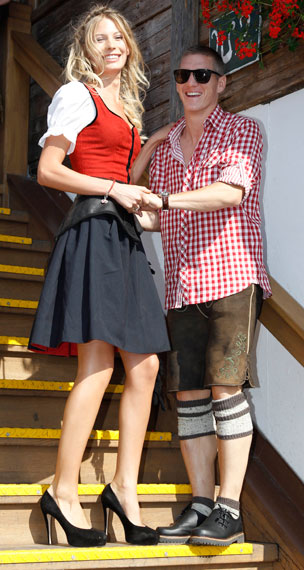 Brazil’s president Dilma Rousseff is to meet FIFA president Sepp Blatter in Brussels today in a bid to defuse growing tensions between her government and FIFA over preparations for the 2014 World Cup.

Blatter is used to getting his own way when it comes to to the hosting of World Cup finals, but it looks like he may have met his match in Ms Rousseff. About time too.

Traditionally, the all-powerful FIFA World Cup committee issues all sorts of barely-credible demands which often undermine the sovereignty of the hosting country.

However, since her inauguration in January, Ms Rousseff has has refused to play ball. In August she reportedly told FIFA executives she considered “absurd” their demands that the Brazilian state accept responsibility for any damages suffered by FIFA, its leaders and installations during the tournament.

As a result, Ms Rousseff has introduced a bill that complies with Brazil’s constitution regardless of FIFA’s demands. It respects a national law that guarantees half-price admission for students and pensioners, a move opposed by FIFA which demands full control over the sale of tickets for the tournament. How else can the likes of Jack Warner feather their nests.

Brazil has also refused to accede to FIFA’s call to guarantee the sale of alcohol in stadiums during the tournament. Under Brazilian law, such sales are regulated by state governments. Bad news for Budweiser. Good news for beer drinkers.

FIFA had thought Brazil had agreed to the requirements when then president Luiz Inácio Lula da Silva signed the contract to host the tournament. However the former president has come out in support of his successor, saying: “No country in the world would set aside its sovereignty to attend to the interests of this or that entity, whatever the reason.”

You’d think so wouldn’t you. But the reality is that most countries would do exactly that.

Beware Greeks bearing gifts, the saying goes, and if the Greek in question works for a football club, best just to walk away altogether.

Asteras Tripolis are the latest club to be demoted from the Greek Super League after being found guilty of bribery. Tripolis president Giorgos Borovilos has also received a three-year ban and the club have been fined 300,000 euros.

Tripolis, relegated at the end of last season, had only secured their place in the top flight on September 5 when Iraklis were demoted for forging a document.

However, football prosecutor Andreas Fakos filed charges against Tripolis, accusing Borovilos of giving the then Olympiakos Volos owner Achilleas Beos 500,000 euros for his team to under-perform when the two teams met at Tripoli in March 2011.

The decision also means that three places in the 16-team Super League are yet to be filled with four rounds of matches already played. Olympiakos Volos and Kavala were both relegated to Greece’s second tier in July for their involvement in match-fixing.

Frankly, the situation is a mess.

A goal of the day and a contender for goal of the season, was this spectacular effort by Eren Derdiyok for Leverkusen against Wolfsburg.

An injunction order against the Asian Football Confederation filed by its suspended president, Mohamed Bin Hammam, has been rejected by the Court of Arbitration for Sport.

Bin Hammam was banned for life by FIFA in July from all football activities for his role in allegedly offering bribes to Caribbean FIFA members in exchange for votes in the governing body’s presidential election.

The Qatari official had been seeking an injunction against the newly appointed Chinese official Zhang Jilong as AFC interim president and FIFA executive committee member while the ban is under appeal.

The decision by the CAS represents a huge blow to Bin Hammam. He was relying on the court to overturn his appeal against FIFA’s lifetime ban. The omens for that case do not look good.

Just days after Inter sacked coach Gian Piero Gasperini, Milan manager Massimiliano Allegri insisted there was nothing to worry about despite a 2-0 defeat at Juventus leaving his side 15th in Serie A.

“Juve deserved it,” conceded Allegri after the defeat.. “We played badly, we used the same players we have all season and there could have been some tiredness at the end but with a bit of luck we could have got a point.

“There’s nothing worrying at all. We’d played well in every game this season but this was our worst game.

“We lost at Napoli as well but we played much better. We didn’t play well tonight but that’s to Juventus’s credit. There’s nothing to worry about, we just need to improve.”

What odds on both Milan clubs changing coach before the end of the year?

Former Chelsea coach Carlo Ancelotti says he has a “strong desire” to return to England for his next job.

Ancelotti told Italian daily La Repubblica that England “is the ideal country for a coach.”

The Italian, who created a favourable impression in England while at Stamford Bridge, admits he has noted that Arsene Wenger is having trouble with Arsenal, and that in a few months an Englishman will replace Fabio Capello as coach of England’s national team, “which will free a spot with a club.”

Ancelotti adds that he would also “include Tottenham and Liverpool” as possible destinations, but says “I’m not in a hurry.”

Five players have been killed in a car accident in Balfour, Mpumalanga, at the weekend, the South African Football Association (Safa) has confirmed.

Safa said the team, from Karan Beef Football Club, was travelling home from a league match.

“Our hearts go out to the families of Douglas Mngomezulu, Lucky Motloung, Thabiso Letsima, Bongane Mgadzi and Mondli Makhaza in their hour of grief and the long period of sadness to follow,” Safa president Kirsten Nematandani said in a statement.

“South African football is so much poorer after the loss of these precious lives,” Petersen said.

“We shall do everything we possibly can to ensure that the deceased are given a dignified burial through our comprehensive insurance plan.”