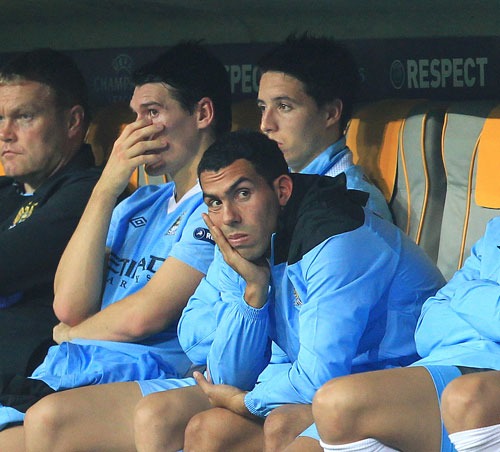 Carlos Tevez has denied allegations by Roberto Mancini that he refused to play for Manchester City in Tuesday’s Champions League tie against Bayern Munich.

City boss Roberto Mancini had earlier washed his hands of the Argentinian, saying the striker was finished at the club.

“If I have my way he will be out. He’s finished with me,” Mancini said.

“If we want to improve as a team Carlos can’t play with us. With me, he is finished.”

Tevez stated via an interpreter: “There was some confusion on the bench and I believe my position may have been misunderstood.”

“I just was not feeling very good mentally to enter the pitch so I put my opinion to Mancini.”

The Guardian juxtaposed Tevez’s attitude with a wreath laid by City officials to commemorate the Munich air disaster of 1958. The contrast is quite striking.

“Tevez broke off from chatting to Zabaleta to have a go at an unsuspecting member of City’s office staff. Tevez could be seen jabbing out his finger, berating him in broken English. The word “respect” could be heard. A couple of times, in fact.

Tuesday began for City with a delegation from the club, led by the life-president, Bernard Halford, the assistant manager, Brian Kidd, and the former captain and manager Tony Book, laying a wreath in the Manchesterplatz to commemorate the Munich air disaster. The following day began with Tevez grinning when he saw the police escort waiting for him at Manchester airport. As one colleague put it (expletives removed): “He doesn’t care less.”

Fans of Manchester United will have derived a modicum of satisfaction from City’s in-fighting, but any desire to gloat will have been curtailed after they were held to a surprise 3-3 draw by Basel. In a thrilling game at Old Trafford, the Swiss side came from 2-0 down to take a 3-2 lead before Ashley Young popped up with a last minute equaliser.

Stat fans among you will be interested to learn that had Basel held on for the win they would have been on course for a small piece of footballing history; it would have been the first time in 37 years that a Sir Alex Ferguson side had lost a match after being two goals up.

A wonderful counter-attack from Real Madrid saw the ball fizz from one end of the pitch to the other and end up in the back of Ajax’s net, all within the space of 13 seconds.

UEFA President Michel Platini has urged European countries to introduce tougher laws to curb match-fixing in a speech to the Council of Europe.

“European football is in danger and I believe I could even say that the whole of sport in Europe is in danger,” he said.

“The growing number of fixed matches connected to online betting is alarming, it doesn’t spare any discipline and no country is safe.

Platini also made an impassioned plea on behalf of international football, whose future is being undermined by the rapacious activities of the leading club sides.

“Don’t let the national teams and innumerable benefits for civil society be sacrificed on the altar of merchandising,” he said.

Platini has his critics, most notably from within the upper echelons of the bigger European clubs, but it’s hard not to believe that he has football’s best interests at heart. Could the clubs say the same? I doubt it.

Rangers owner Craig Whyte has confirmed he wants to move the club into the Premier League or a new ‘Atlantic league’ as he admits administration is a “possibility”.

The admission comes amid reports that the Scottish champions could be be hit with a £49 million bill for back-taxes by Her Majesty’s Revenue and Customs. If they lose the case then the club will almost certainly end up bankrupt.

Therefore, it’s unlikely to be a coincidence that Whyte has begun complaining about the limited earning potential currently offered by Scottish football.

Despite the Premier League having already rejected overtures from Rangers and Old Firm rivals Celtic, Whyte  says that Rangers are still working “behind the scenes” on a switch to the English league. But, if that fails, a northern European league is being mooted.

“[Joining the Premier League] is clearly something that we would like to see examined, it is something we are working on behind the scenes, but there are other potential ideas in terms of European leagues, joining some of the Nordic countries, the Netherlands to create a league.”

Lest we be under any illusions about the nobility of Whyte’s intentions, here’s what he had to say when he became Rangers chairman earlier this year.

“I’m here first and foremost because I’m a Rangers supporter. I also see a great opportunity and think that Rangers can be a great worldwide brand. I believe there are many commercial activities that can be expanded on.”

There’s a bottom line and its name is money.

Real Madrid goalkeeper Iker Casillas has dismissed rumours that he was involved in a training ground bust-up with Cristiano Ronaldo ahead of the 3-0 Champions League Group D win over Ajax.

Earlier reports suggested that the two had exchanged words during a practice session, but Casillas has laughed off any suggestions of an alleged brawl.

“I’ve been a professional for 12 years now and there are always rumours like this. I can only laugh about it. Amid jokes we have said: ‘Where are the photos? because we want to see them’,” Casillas told Marca.

This is not the first time that reports of a rift between the pair have surfaced. A year ago, team mate Xabi Alonso described the feud as an “urban myth”.

Yesterday’s news that the 2013 CAF Africa Cup of Nations (CAN) has been switched from Libya to South Africa, is a boost to those who argue that the 2010 World Cup legacy was not simply a series of over-sized, underused stadiums.

Amid fears that the stadiums would lie largely vacant, the South African authorities have done their utmost to utilise them in the months since the World Cup ended.

The Soccer City (now known as FNB Stadium), venue for the World Cup final, hosted a rugby match between South Africa and New Zealand, and the stadium has also played host to major music concerts, including a sold-out gig from U2. Next month Coldplay are playing and in November there will be a car boot sale while December promises a Christmas fair in the car park.

The Football Association is investigating a bizarre Bath City youth match after the referee sent off six members of the team in a row over the colour of the players’ underwear.

Trouble began during an FA Youth Cup match against Newport County when the official enforced a rule that players should wear the same colour pants as their shorts. Two Bath players were ordered to change their underwear and while they stripped on the sidelines, Newport scored.

The referee was forced to lock himself in the changing room after the game as several irate parents attempted to vent their frustration over his performance. If you’ve ever witnessed parents at a schoolboy match you can imagine how frightening a scene this must have been. I’m surprised he got out alive.

Bath chairman Manda Rigby said: “I understand the kit rule but this was a Youth Cup match – not a professional game. The players were made to strip off in front of the crowd, which is quite an ordeal for players aged 16 or 17.”

From Russia with love

Samuel Eto’o says he is happy he chose to leave the Serie A for Russian Premier League club Anzhi Makhachkala. I’m sue his agent is even happier.

The world’s highest paid footballer told Gazzetta dello Sport that the move has gone well, but conceded that some of the training sessions border on the farcical.

“I am happy with my choice to Anzhi, even though I never thought one day I’d come to this part of the world to play football,” said Eto’o.

“It’s quite funny playing here, and during training sessions, it’s like a theatre. Each foreign player has a personal interpreter. And when the head coach gives instructions, you see six to seven interpreters jumping forth to explain to their clients. I’ve never seen this before. It’s funny and interesting though.”

Police have raided the offices of club River Plate and the Argentine Football Association searching for evidence of fraud of money laundering.

A federal judge issued the order, which was sought by lawyer Alejandro Sanchez, after River Plate were relegated in June to the second division for the first time in its 110-year history.

Officials also searched the headquarters of the Argentine Football Association.

Sanchez said the suit was directed at former club president Jose Maria Aguilar, current president Daniel Passarella “and all members of the board of directors, who are responsible for running the club in recent years and generated, among other things, the demotion of River.”

He said AFA was involved because of the “close relationship” between Aguilar and AFA’s 80-year-old president Julio Grondona. He claimed Grondona autorized loans to Aguilar in exchange for support as the head of Argentine football.