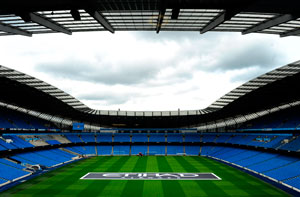 Manchester City have confirmed the City of Manchester Stadium will be renamed the Etihad Stadium after signing a 10-year deal with the airline.

“We are delighted to be expanding our relationship with Etihad Airways through this comprehensive partnership agreement,” City chief executive Garry Cook said.

“Most importantly, in addition to delivering significant revenue at a key stage in the club’s evolution, the agreement creates exciting opportunities for our two organisations to co-operate more deeply commercially and on media and community initiatives in the future.”

Don’t feel stupid if you don’t understand that statement, you’re not alone.

Incidentally, Cook’s mission statement for Manchester City remains a template for the branding idiocy sweeping the world of football.

Describing his hopes for City, he said: “It’s about building a club that is a successful business whose core competency is football.”

This kind of language is contagious. Describing the stadium-naming deal, Etihad Airways chief executive James Hogan said: “This is a game-changing partnership agreement that redefines the traditional sports sponsorship paradigm.

It’s unclear how the this deal going to redefine the traditional sports sponsorship paradigm. Unless they’re planning to turn the stadium into an airport.

“It is a once-in-a-lifetime opportunity for two iconic brands that share the same vision to promote far-reaching global awareness and business growth,” added. Hogan, clearly unaware that one FA Cup win in the past 35 years, does not an iconic ‘brand’ make.

The deal, reported to be worth up to £100 million, has been interpreted in some quarters as an attempt to bypass UEFA’s forthcoming Fair Play regulations. UEFA said they will use benchmarking exercises and employ specialists to determine whether naming-rights deals are above their true market value. But how do you value an icon? Let alone Manchester City?

In stark contrast to the riches flowing into the Etihad Stadium, Spanish football club Racing Santander has filed for protection from creditors under Spanish bankruptcy law.

Club president Francisco Pernia said on Friday that the club owes more than €33 million. That’s approximately the same as Manchester City will spend on Yaya Toure’s wages over the next two seasons.

Pernia said “To avoid greater harm, like being relegated, we have filed for bankruptcy protection.”

Pernia said the team “cannot stop searching for a large shareholder because, as we have said for four years, Racing needs a solvent businessman behind it.”

Goals of the day

Trailing 2-1 in their FIFA U-17 World Cup semi-final to Germany, hosts Mexico turned the tide when Julio Gomez bravely threw himself head first at the ball and collided with a German defender on the line. The ball missed both players and sneaked in off the far post.

A word of warning, the sickening clash of heads in slo mo towards the end of this clip, is not for the faint-hearted.

Gomez had to leave the pitch for treatment, but he returned, his head covered in bandages, and with the game entering its final moments, managed to score with an overhead to send the hosts through to the final.

If you’re at work, you may want to turn the sound down. The commentator gets rather excited.

As if to prove the maxim that there is no such thing as bad publicity FIFA has shrugged off its recent travails by Johnson & Johnson as the eighth and final global sponsor of the 2014 World Cup.

Johnson & Johnson will become the exclusive and official healthcare sponsor of the World Cup,

“The FIFA World Cup unites people of all cultures, ages and socioeconomic levels like no other event and we’re excited to tap into this passion and reach to further impact health and wellness around the world,” said Brian Perkins, corporate vice-president of corporate affairs for Johnson & Johnson. “Through this sponsorship, the company will be able to reach new professionals and consumers and deepen our commitment and connection to the people and communities we serve.”

I told you this kind of language was contagious.

Recently resigned FIFA vice-president and Concacaf boss, Jack Warner has described as “nonsense” claims by one of his close associates that he voted for Qatar instead of the USA to be hosts of the 2022 World Cup.

Patrick John, president of the Dominica Football Association, told local radio in Dominica: “The whole thing is a conspiracy against Jack Warner. Jack promised the United States to push for the World Cup but when the thing came along at FIFA level Jack supported Qatar. That hurt the United States.

“Jack promised the English FA to push for the World Cup for them, but Jack sided with Russia so these two federations are up in arms against Jack, they are the only federations making trouble.”

Warner insisted that was not the case, saying in an email: “If Mr John did say so then that is nonsense but I imagine that one day all of this foolishness will come to an end.”

There was a time, not so long ago,  when Warner could threaten a ‘football tsunami’ and be taken half-seriously. Not any more. Now, the emperor is naked, and  just wants it all to be over, so that he can enjoy his long overdue retirement.

Nicolas Anelka will not contest a court decision to rule against him in his legal action with L’Equipe over their reporting of his World Cup outburst, his agent has confirmed.

Anelka had claimed €150,000 in damages from L’Equipe over their coverage of his row with coach Raymond Domenech at half-time of France’s 2-0 Group A defeat by Mexico in South Africa last year.

L’Equipe memorably accused Anelka of telling Domenech: ‘Go fuck yourself you dirty son of a whore!’

The striker, once known as Le Sulk, appears to have mellowed in recent years, and his agent confirmed that his client had decided to let sleeping dogs lie

“Nicolas Anelka is satisfied with the decision,” read a statement from the player’s agent sent to AFP.

“He has never denied that he openly criticised the system of play at half-time of the France-Mexico game, but recalls that he never wanted to insult Raymond Domenech and now wishes to definitely close this case.”

Costa Rica’s 2-0 win over nine-men Bolivia has heaped further pressure on Argentina. The sides meet on Monday in the final Group A game, with the hosts requiring a positive result to reach the knockout stages.

The tournament was set up to ensure an upset at this stage is unlikely, so a draw may be enough to send them through as one of the two best 3rd placed sides. However, such a fate could condemn them to a quarter-final encounter with arch-rivals Brazil.

It can only be a matter of time before the campaign to bring back Diego Maradona gets underway.

Here’s the highlights from Costa Rica’s victory, including both sendings-off.

Arsenal skipper Cesc Fabregas has reportedly told his team mates that he won’t play for the club again. In which he case, he faces the prospect of a lengthy spell on the sidelines, as Barcelona have revealed that they are in no hurry to sign him and may even wait until the deadline day at the end of August.

“The experience of the last few years and of last season shows us that we have right up until the last minute before the season starts [to sign players],” Barcelona vice-president Josep Bartomeu said.

“We made signings very late last season. We have the best team in the world so we can afford to be patient. There is no rush, we have until the last moment.”

Words that are sure to endear the club to Arsenal boss Arsene Wenger.

Urrutia announced during the campaign that he would replace coach Joaquin Caparros with Bielsa.

“We expect (Bielsa) to arrive on Sunday,” Urrutia said.

“Bielsa hasn’t asked for any players, but he said that the coach always wants more,” Urrutia said. “We don’t have a lot of time, so we will have to hurry to make decisions.” No time

Bilbao, who are one of only three clubs to have have never been relegated from La Liga, will play in the Europa League this season after Caparros led the team to a sixth-place finish in the Spanish league.

After the vote, the Spanish manager said “Thanks to all the fans of Athletic for the four years we have spent together.” Which, considering his unceremonious dumping, was rather gracious of him.

The Swede, currently in charge at Leicester City, was impressed by footage of Hargreaves jogging on a treadmill posted on youtube and is considering contacting the midfielder.

Eriksson said: “I saw his videos and if he wants to come here I will open the door and stand and wait for him.” Although given his recent fitness record, he could be in for a lengthy wait.

“He has been very unlucky in recent years but if he is close to what he was he is a fantastic footballer,” Eriksson added.

“I haven’t spoken to him for a while, maybe I should. It is difficult to know what he wants to do.”

Eriksson is interviewed in the current issue of World Soccer