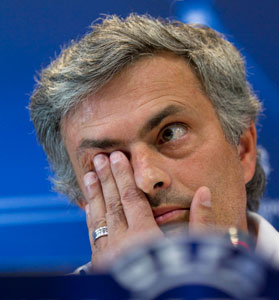 “Villas-Boas was living with Mourinho’s ghost. He was afraid he would not have the same success as in his first season. I think that was the crucial aspect in his departure,” said Pinto da Costa.

“In a conversation between the two of us I said ‘Are you worried about shipping three or four goals against FC Barcelona (in the European Super Cup)? Mourinho shipped five but that does not mean he is no longer the best coach in the world.

Pinto da Costa, clearly unhappy that a favoured son had left, twisted the knife by suggesting that Villas-Boas’ new side, Chelsea, were not even a big club.

“If I was his father I would have told him what I told him as his president and his friend: that he should have stayed at FC Porto. In football, when you talk about European giants, the measure is not Chelsea. It’s Real Madrid, Barcelona or Manchester United. I told him that this would be Guardiola’s last season at Barcelona and that was the ideal club for him, but he was scared of the comparisons with Mourinho and left.”

As France’s team prepare to face the USA in the Women’s World Cup semi-finals, coach Bruno Bini has been outlining his unique footballing philosophy.

A journalist asked Bini to explain his method of utilising “poetry and songs to lift the spirit of his team”.

“I’m tired. Tired of saying the same things all the time,” Bini said. “That’s how I am, I use writing, literature and poetry to get my message across.”

When told that the Americans had complimented the French players, saying they had guts, Bini replied: “This is football, not a charcuterie.” Surely something was lost in translation there.

Asked if the Dominique Strauss-Kahn affair (the former IMF chief is accused of raping a hotel maid in New York) would be giving the France players additional incentive against the Americans, Bini brushed aside the suggestion.

“We’re here to talk about football, we won’t answer this question. We play for the love of it,” said Bini.

Before the tournament commenced, Bini gave notice that he was not your typical football coach.

“We are going to Germany to produce together a beautiful album,” Bini said in the French media guide. “It is at the end of the ball that we pay the band. Hopefully as late as possible.”

No, not the long-awaited tsunami of revelations promised by disgraced Jack Warner, but the motivation for Japan who face Sweden in today’s other semi-final at the Women’s World Cup.

“We’ve seen these pictures every day since March 11 and it touched something deep in our souls to see those pictures again before the game,” Japan coach Norio Sasaki said when discussing the impact the earthquake and subsequent tsunami had on his players.

“We showed the slides before the German match to bring some mental stability and heart to the players.”

After each World Cup game, the Japanese unfurl a banner to show their appreciation for the support their country has received after the disaster.

It’s all a far yet welcome cry, from some of the hype we’re subjected to every four years at the men’s World Cup. 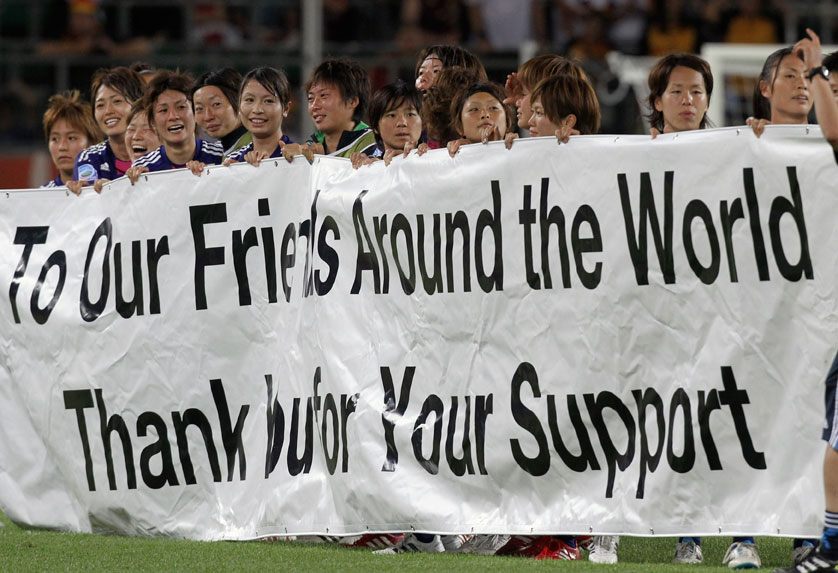 Today’s grubby instalment shifts the focus away from Europe to Africa, and the news that former Zimbabwe national football team coach Sunday Chidzambwa and several top players are facing life bans after being named as suspects in a match-fixing scandal.

The scam, allegedly masterminded by former ZIFA chief executive Henrietta Rushwaya, involved a 2009 tour by a side purporting to be the Zimbabwe national team to play unsanctioned friendlies against Thailand, Syria and Malaysia, during which the matches were fixed by a betting syndicate. Rushwaya, who was fired last October, is also accused of clearing former league champions Monomotapa to travel to Malaysia, where they masqueraded as the national team.

In May, Chidzambwa successfully sued ZIFA for $67,000 in unpaid wages dating back to his spell in charge of the national side. I hope for his sake, he cashed the cheque.

A contender for the longest range goal ever, was scored by San Jose Earthquakes keeper  David Bingham in a friendly match against West Bromwich Albion.

The effort was reminiscent of Paul Robinson for Spurs against Watford a few years back.

Once you start clicking on those youtube links it’s hard to stop.

Here’s one from a goal kick in South Korea’s friendly international against the Ivory Coast.

Another monstrous long-range effort came during a pre-2006 World Cup friendly game between Poland and Colombia.

Milan director Barbara Berlusconi has denied reports that her father, Silvio, will sell the club to help pay off a €560million fine imposed by the Italian courts on the club’s parent company Fininvest. However, being a Berlusconi it makes sense not to take her words at face value.

“I want to reassure our supporters the group will be there for the club to help them achieve the ambitious aims we have set out,” Barbara Berlusconi told the club’s official website, www.acmilan.com.

Berlusconi senior was handed the fine for bribing a judge in a case dating back to the early 1990s. The Milan owner is also facing four trials, including one on a charge of bribing David Mills, the lawyer and estranged husband of UK MP Tessa Jowell. He is also charged over his involvement with a teenager at alleged “bunga-bunga” sex parties.

Somewhat improbably, he remains, for the time being at least, not just a free man, but the Prime Minister of Italy.

In a rare and long overdue outbreak of common sense, a meeting of the Spanish Professional Football League (LFP) has approved the implementation of a rule to oversee financial control of the 42 teams which comprise the top two divisions in Spain.

The Reglamento de Control Económico is a system designed to safeguard clubs’ economic interests and will come into effect at the start of next season, with the LFP agreeing to present a list of all player transfers and acquisitions and to comply with rules taking in balance of payments, company performance and net profit. It will also adhere to strict guidelines regarding money spent on players in relation to income, and the ratio of a club’s debt debt against total earnings.

At the end of each season clubs will have to show they do not owe money to either players or the tax office, if they wish to avoid sanctions. These sanctions range from a ban on new signings, relegation, points deduction and a variety of fines. The league has also agreed to create a debt recovery fund, which will serve to cover potential default on payments.

The plans all sound so eminently sensible and worthwhile that they almost almost certainly won’t catch on elsewhere.

At the other end of the financial spectrum, Manchesetr City’s recent stadium naming rights agreement with Etihad airways, has come under scrutiny. Remarkably, it has just dawned on some that the £400 million deal was not the market rate for a club that has won just a solitary FA Cup in the past 35 years.

On hearing about the size of the deal, Liverpool owner, John Henry, John Henry tweeted ‘How much was the losing bid?’

Meanwhile, given his legendary aversion to spending money, it was only a matter of time before Arsenal boss, Arsene Wenger, opined on the Manchester City deal.

“It raises the real question about the credibility of Financial Fair Play,” Wenger said. “That is what it is all about.

“They give us the message they can get around it by doing what they want. It means Financial Fair Play will not come in. It is as simple as that.

“The credibility of Financial Fair Play is at stake. The sponsorship cannot be doubled, tripled or quadrupled because that means it is better if we leave everybody free.

“He (UEFA president Michel Platini) is not stupid, he knows as well that some clubs will try to get around that and at the moment I believe they are studying, behind closed doors, how they can really check it.”

Platini may not be stupid, but he may soon realise that there is a limit to his powers.

Having never seen a £10million footballer before, fans in China have flocked to Baiyun Airport to witness the arrival of Darío Conca, the uncapped Argentinian, who has sealed a record-breaking deal with Guangzhou.

“I never imagined so many fans would turn out to meet me,” a stunned Conca told Sina Sports.

“This never happened to me in Argentina or Brazil – I must produce my best performances in return for this welcome from these Chinese fans.”

Inter have denied receiving any bids for playmaker Wesley Sneijder. The 27-year-old has been linked with a £35 million move to Manchester United, but Inter’s technical director Marco Branca says there is no substance to the speculation.

“No, there’s not been an official offer and there has never been the intention to listen to them,” Branca said. “There are no updates. He is not for sale.”

The player himself has given away few clues about his plans, although in an interview with Italy’s version of Vanity Fair magazine, he was happy to extol the virtues of Inter the club, and Milan the city.

“I would like to remain at Inter,” he said. “I have marvellous team-mates. Zanetti has an extraordinary character, he has kept us together even at times when the morale was low.

“My wife Yolanthe and I love Inter, the Italian fans and Italy. Of course, if the club decided to sell me, I will go wherever they tell me to go. But I would be disappointed to leave.

“We have felt so good here that I would miss the city of Milan and Inter. But football is like that. When I was sold from Real Madrid to Inter, I would have preferred to have remained in Spain. Whatever will be, will be.”