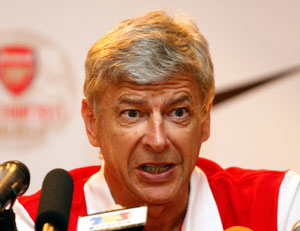 Arsenal boss Arsene Wenger must hate this time of year. Not only must he sit idly by while his domestic rivals open their wallets, dust off the cobwebs and actually spend some money, but his European rivals resume their annual flirtation with his club captain, Cesc Fabregas. No wonder he’s a little tetchy at the moment.

Wenger has responded to an interview published on Barcelona’s official website, in which midfielder Xavi claimed Fabregas had told him he has been “suffering” because of his desire to rejoin the Catalan club.

“I spoke to Cesc in Ibiza and he said he was suffering because he wanted to come,” Xavi said. “It’s more like, he did everything he could to come and wants to leave Arsenal, although he made it clear that now everything depends on the selling club.”

Wenger, on tour with Arsenal in Malaysia, expressed his dissatisfaction with the Spanish club.

“If I found Barcelona in exactly the same position, I believe a mutual respect between the clubs should stop this kind of comment,” he said. “If it is true then it is very disrespectful and it is not the first time that Xavi has been disrespectful to Arsenal.”

Xavi, you may recall, once described Fabregas as “a footballer made up of Barca DNA”.

Despite Wenger’s continued insistence that Fabregas “is contracted to Arsenal”, it’s hard not to picture the Arsenal boss in the role of King Canute, with the waves lapping around his knees.

Emmanuel Adebayor, who once described Arsene Wenger as “like a father to me…he put me where I am today, no doubt about that”. This was shortly before the Togo striker walked out on Arsenal and moved to Manchester City.

On his arrival at Eastlands, he told reporters: “I can’t wait to play for City’s fans and show them what I can do,” he said. Which, to be fair to him, he did…for about a fortnight.

“He will definitely add a new dimension to our play,” said the then City manager Mark Hughes. And in some ways Adebayor managed this: performing not so much as a withdrawn striker, but as an absent one.

Well, to no one’s great surprise, Adebayor has found a new love, Real Madrid coach, Jose Mourinho, of whom the striker says: “if he called right now I would catch the first plane to Los Angeles.” Now, that kind of dedication can only mean one thing: yes, that’s right, there’s a whopping signing on fee in the pipeline.

Mourinho, who though not like a father to Adebayor is nonetheless “the best coach I’ve worked with. He gave me confidence and made me believe in myself and I enjoyed my football again.”

In case you’re wondering how Adebayor brand of loyalty manifests itself, take a look at this:

In last night’s thrilling 3-3 draw between Paraguay and Venezuela, Rondon opened the scoring for La Vinotinto by wrong-footing a defender and firing home from the edge of the area.

Bayern Munich supporters have finally agreed to call off their protests against new signing Manuel Neuer. The German keeper had become a hate figure among Bayern fans since he mocked their former goalkeeper, Oliver Kahn, a few years ago.

“On Tuesday evening there was a meeting between Manuel Neuer and groups from the South Stand, which have taken part in demonstrations against the transfer of Neuer,” a fans’ statement read.

“We made him aware of how he has to behave in front of our stand. As for our opinion about him, which you can read in our previous statements, nothing has changed. If Manuel Neuer agrees to the rules we laid down regarding his conduct and keeps a respectful distance, there will be no further organised protests and actions.”

In case you’re unsure, this is the supporters telling Neuer how he should behave, not his employers.

Marseille have set up security patrols outside the homes of their players after defender Vitorino Hilton was the latest player to be burgled at his home.

The 33-year-old Brazilian was at home with his family on Tuesday when a gang of armed men broke in shortly before midnight and eloped with cash and valuables including cameras, computers and jewels.

This is not an isolated incident. Far from it. Argentine playmaker Lucho Gonzalez suffered a similar fate in March, while the home shared by Ghanaian brothers Andre and Jordan Ayew has been burgled twice in the past 9 months.

Other Marseille players, past and present, to have been victims of burglary include Stephane Mbia, Andre-Pierre Gignac, Mamadou Niang, Habib Beye and Fabien Barthez, as well as former president Jean-Claude Dassier. And you thought Liverpool had a problem with players being burgled.

“Olympique Marseille can no longer tolerate and accept that some of their players should be victims of ‘home-jacking’,” read a club statement released on Wednesday.

Sevilla has lent support to the humble Spanish cucumbers which were initially deemed responsible for a deadly E. coli outbreak in Germany.

Sevilla president Jose Maria Del Nido unveiled the team’s pre-season outfits, which featured a small badge on the sleeve reading “I (love) cucumbers” above the image of a cucumber.

Del Nido, just a little melodramatically, says the gesture was made “in defence of the cucumber of Murcia … after the war it had with Germany over the cucumber.”

A World Cup to remember

Bruno Bini, coach of the French side at the Women’s World Cup, whose novel approach to coaching was highlighted in Wednesday’s World Soccer Daily, was refreshingly measured when assessing France’s semi-final exit to the USA.

“Life’s still beautiful because today we earned the right to fight for third place, which is amazing when you consider nobody was talking about us two months ago. This is a wonderful day. It’s all about your philosophy of life, whether you’re a glass half-full or glass half-empty person. If there are now parents [in France] thinking football might be a good game for girls, I’d say that’s pretty good,” said Bini, who is rapidly evolving into the anti-Mourinho of the coaching world.

There was competition for the goal of the semi-finals between this volley from Nahomi Kawasumi:

Pierre Webó appears to have played his last match for Real Mallorca after he refused to participate in the team’s pre-season friendly at Hammarby last night.

The club released a statement on their website saying, “Webó informed coach Michael Laudrup before the game that he was refusing to play the game. The club regrets this serious act of indiscipline and is exploring the avenue of disciplinary action against the player.”

Webo has been no stranger to controversy since he arrived at Mallorca in 2007. Last year he claimed he hadn’t been paid in his time at the club. It transpired that this was an attempt by his agent, Paco Casal, to exploit a tax loophole.

Casal is suspected of being behind Webo’s decision not to play last night. The agent is reported to be trying to emulate what Felipe Mattioni and his agents conjured up last season, when the Brazilian refused to train and eventually had his contracted rescinded, thus earning Mattioni’s agent an £850,000 pay-off.

Nice work if you can get it.

Peter Velappan, former general secretary of the Asian Football Confederation’s (AFC) has hailed Singapore’s return to the Malaysia Cup from next year after a near twenty year absence, but warned that bookmakers may be the ultimate beneficiaries.

“It was the magic moments of Malaysian football when Singapore was playing in the Malaysian league. In football you need rivalry. I welcome the decision,” he said.

But, Velappan believes the move will simply usher in a new wave of match-fixing, as the problem is now endemic in South East Asia.

“Right now ASEAN football in particular is really destroyed by match-fixing, corruption and bookies and this is across all levels – from players, club officials, coaches and referees,”he told AFP.

“Unless there is a political effort to eliminate the scourge, we can’t improve football.

“While this (initiative) is a good idea, there is another potent force killing all the initiatives; bribery, match-fixing and corruption. Now it is really rampant.”

The decision to sack coach Hossam Hassan has not go down well with Zamalek fans.

One of the fans groups, known as White Knights Ultras, has accused Zamalek’s board of being ungrateful after Hassan led the team from 13th place to second last season.

They held demonstrations on Wednesday in front of the club headquarters to express their disapproval of the decision to aze Hassan and appoint Hassan Shehata.

You wouldn’t want to get on the wrong side of the White Knight ultras. Here they are putting on an amazing pyrotechnic display during this year’s African Champions League clash with Tunisia’s Club Africain.

And here are the same fans about 30 minutes later after a goal was disallowed.

The match was eventually abandoned.