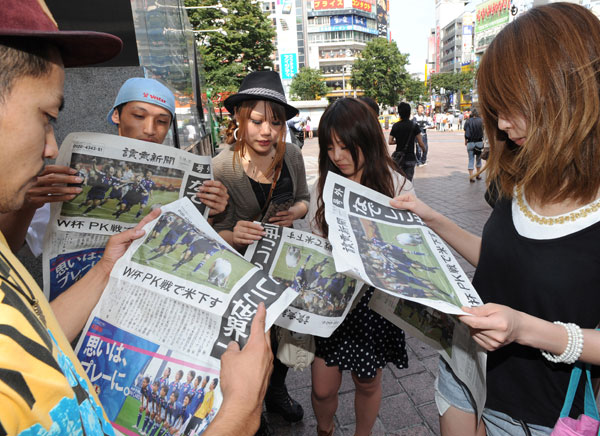 Before we move on to the depressing daily diet of match-fixing, corruption, and overpaid, pampered footballers, let’s hail Japan’s victorious Women’s World Cup winning team who were mobbed by well wishers on their return to their homeland.

Sunday’s penalty shootout victory over the USA came against a backdrop of concern about the the earthquake, tsunami and nuclear disaster that hit the country in March.

“This is a chance to forget the nuclear disaster and everything else, to just unite and celebrate,” said supporter Toru Komatsu.

“It has been so scary with the earthquake and everything,” added fellow fan Miaki Tomiyama. “The team has given us happiness.” Which, is all you can really expect from sport.

Prime Minister Naoto Kan hailed the victory as the “greatest gift” to the nation.

“I think they brought courage to the whole nation. As the prime minister, and as one Japanese citizen, I express my heartfelt gratitude,” Kan said before greeting the team personally on Tuesday.

Sepp Blatter has been voted the biggest “celebrity villain” of the past decade.

The poll, commissioned by SyFy to promote the launch of superhero series The Cape, received around 2000 votes.

So, hardly a comprehensive vote, but a good deal more transparent and democratic than Blatter’s recent re-election as FIFA president.

Juventus are to appeal against the Italian Football Federation’s (FIGC) decision to allow Inter to keep their 2006 Serie A title.

Inter were retrospectively awarded the title after it was stripped from Juventus following the 2006 Calciopoli match-fixing scandal, in which the Turin club was found guilty of trying to influence referee selection to effect the outcome of matches.

A report from a federal prosecutor earlier this month accused Inter of having illegal contact with referees, and Juventus lodged a request with the FIGC to leave the 2006 title vacant.

Juventus, understandably, given that they were relegated for their part in the scandal, believe that the decision not to strip inter of the title, smacks of double standards.

“The decision of today’s Federal Council confirms a completely different treatment for similar situations,” Juventus said in a statement.

“…The club’s lawyers have been given the mandate to identify the best protection instruments in administrative and international law,” the club’s statement continued.

Regardless of the final outcome, with Juventus set to pursue their grievance through the courts, the real winners look like being the lawyers.

A Singapore man has been convicted of bribery, forgery and illegal border crossing and sentenced to two years in prison for his part in the Finnish match-fixing scandal.

The Lapland District Court says Wilson Raj Perumal gained about €150,000 for fixing results in the Finnish football league from 2008-11.

In Tuesday’s verdict, seven Zambian and two Georgian players of the team were given suspended sentences ranging from six months to 20 months for accepting bribes of €11,000 to €40,000 each to affect the outcome of matches.

Milan midfielder Kevin Prince-Boateng has admitted that he considered Zlatan Ibrahimovich to be an “arrogant b*****d” before they became team-mates last season.

Let’s be honest, he wouldn’t be the first person to have had such thoughts.

“I had thought Ibrahimovic was an arrogant b*****d, but he’s really nice, kind and funny,” the midfielder told La Gazzetta dello Sport.

Goals of the day

Cristiano Ronaldo gave American supporters a glimpse of what Europe has become accustomed to in recent years. Coming on as a second half substitute, the Portuguese international twisted and turned, before unleashing a left-foot strike into the roof of the net during Real Madrid’s 4-1 friendly victory over LA Galaxy.

Here he is giving the ball away cheaply, and in his attempt to make amends, the former England man deflects Joselu’s tame shot into his own net.

Undaunted by FIFA’s oft-stated desire to avoid the finals being co-hosted, the ASEAN federation is optimistic that a tournament played across ten different countries won’t present too many logistical problems.

“We are serious with our plan to bid for hosting the 2030 World Cup. We will take the necessary steps, including pooling our resources and engaging the football association as a respective member for that goal,” said Indonesian Foreign Ministry Director General for ASEAN Co-operation,

Well, if Qatar can be awarded the right to host the tournament in the middle of summer, then I suppose anything is possible.

Arsene Wenger’s continued reluctance to spend any money will come under fresh scrutiny after Arsenal chief executive, Ivan Gazidis, assured the club’s supporters that there is cash to spend, plenty of it too.

In words that are sure to send Wenger into a cold sweat, Gazidis promised to launch a spending spree before the transfer window closes at the end of August.

“We still will be active in this window,” Gazidis told the club’s official website. “We haven’t finished our business at all. We’re just not conducting it publicly; we’re working hard privately.  I was out in Asia because I could be with Arsene for an extended period of time and think very, very carefully about strategy and targets.

“The resources are there. We’ve got a substantial amount of money that we can invest. ”

So, when Arsenal fans look at their squad list in early September and wonder where Cesc Fabregas has gone and why their only new arrivals are a goalkeeper on a free transfer, an unknown French-speaking central ‘defender’ and diminutive, but tricky midfielder from Ligue 1, they’ll know who to blame.

Brazil’s press has been laying the boot in to the country’s footballers following the Copa America quarter-final penalty shootout defeat to Paraguay. In case you’re unaware, Brazil, scaling new heights of spot-kick incompetency that even England would have been ashamed of,  missed all four of their penalties in the shootout.

‘Historic incompetence’, was the verdict of O Globo, which added that Mano Menezes’ side was eliminated ‘in embarrassing fashion’.

Jornal de Brasilia summed things up sucinctly: “Brazil did not manage to score a goal in normal time, nor in extra-time, and, worse still, not even in the penalty shoot-out.”

Correio Braziliense said some of the players’ insistence that the poor state of the pitch had played a major role in their exit was ridiculous.

“After the Brazilians’ disastrous showing, they tried to shift the blame and were unanimous in pinning it on the pitch,” the paper wrote.

“The pitch was irregular, very bad,” said Thiago Silva whose penalty was expected to dock with the Atlantis shuttle, shortly before it returned to earth. “When I took the shot, my foot sunk in the grass and the ball went up. You just have to look at the replay to see it. You can make me shoot 10 penalties in a row and the ball will never take the trajectory it took yesterday.”

Fred, another to miss his spot-kick, also blamed the  quicksand, otherwise known as the penalty spot.

“If you check the replay you will see that our feet sunk in the grass and the ball wasn’t still,” he said. “It was disturbing.”

Make your own mind up:

What would Brazil give for Theyab Awana, the United Arab Emirates player, who backheeled a penalty in a friendly against Lebanon?

Well, the chances are they wouldn’t have reacted in quite the same way as the UAE management team who have threatened the player with sanctions for being “disrespectful.”

Awana’s goal in UAE’s 7-2 victory has been described by UAE manager Esmaeel Rashedas “disrespectful” and that Awana could be punished. A meeting is set for Tuesday in which the team will decide what action to take against Awana.

“This should have not happened,” Rashed said. “I think what happened is disrespectful. We cannot accept anyone in our team who does not respect the opponent.”

UAE coach Srecko Katanec added “We will resolve this inside our team and there will be no more talking about it,” Katanec said. “This is not respect, OK? I am unhappy. My reaction was normal. I substituted him.”

I’m all for respect, but isn’t this taking things a little too seriously?

A United Arab Emirates soccer player whose backheeled penalty in a friendly against Lebanon has become an Internet sensation, faces possible sanctions for being “disrespectful.”

Awana approached the ball to kick what would be a typical penalty, but spun and hit past the goalkeeper with his right backheel. Awana struted away smiling and several Lebanese players angrily screamed at him.

UAE manager Esmaeel Rashed told The National newspaper the move was “disrespectful” and that Awana could be punished. A meeting is set for late Tuesday in which the team will decide what action to take against Awana, including a possible suspension or fine.

“This should have not happened,” Rashed told the newspaper. “I think what happened is disrespectful. We cannot accept anyone in our team who does not respect the opponent.”

UAE coach Srecko Katanec was visibly angered by the shot and took Awana out of the match soon afterward.

“We will resolve this inside our team and there will be no more talking about it,” Katanec said. “This is not respect, OK? I am unhappy. My reaction was normal. I took him out.”