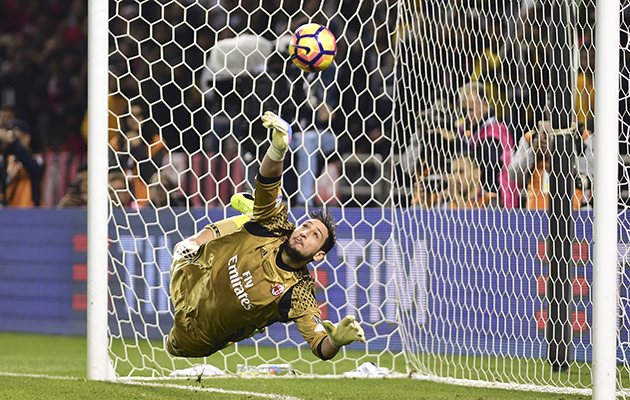 Italian champions Juventus will probably be relieved to line up against Porto in their Champions League, second round return tie in Turin tonight…and not just because they are 2-0 up from the first leg in Oporto. On paper, the champions are well on their way to the quarter-finals after a first leg won by goals from two substitutes on the night, namely Croat Marko Pjaca and Brazilian Dani Alves.

The Juventus sense of relief, however, has little to do with Porto and much to do with the fallout from their bitterly controversial 2-1 win against old rivals, Milan at the Juventus stadium last Friday night. As we went into the seventh minute of time added-on, this game seemed set for a 1-1 draw.

Juventus had dominated a typically hard fought game but had failed to make the most of their dominance against a Milan side that, especially in the last 20 minutes, played with a sense of determination and self-belief that has not always been evident this season. Just as the game was about to conclude on a 1-1 scoreline that would have left everybody contented, if not necessarily ecstatic, the inevitable happened when a bitterly contested penalty call trundled onto the stage with all the subtlety of the “Commendatore” in the finale of Mozart’s Don Giovanni.

As Juventus mounted one last desperate attack, Milan full back Matteo De Sciglio appeared to handle a cross from Switzerland’s Stephan Lichtsteiner. It was one of those situations where the distance between the two players (less than two yards) and the speed at which the ball was travelling made the decision very difficult. Had De Sciglio moved his arm to block the ball or had the well struck cross banged into his elbow for an “involuntary” touch?

Referee Davide Massa’s call was made all the more polemical by the fact that he had just added on an extra 30 seconds after having sent off Milan’s Argentine midfielder José Sosa (the sending-off, for a second yellow card, seemed like a correct decision). Anyway, the rest is history of the polemical kind since Juve’s Argentine talent, Paulo Dybala, stepped up to score the perfect penalty against Gigio Donnarumma.

This had been one of those games when the Milan ‘keeper, who has just turned 18, really justified his reputation as the brightest young goalkeeping talent in Italian football. This is a player ready at any moment to step into the shoes of the man who was keeping goal down at the other end of the pitch, namely Juventus and Italy captain, Gigi Buffon.

Having denied Juventus on at least a dozen occasions, Donnarumma could do nothing against either Dybala’s penalty or indeed against the point blank Dani Alves first half goal which had seemed to set the Old Lady on her way to a clear win. And so it would have been, were it not for Donnarumma’s outstanding performance.

Inevitably, the late Juventus penalty sparked a thousand anti-Juve conspiracy theories into life. Worse than that, however, was the on pitch reaction of a number of “agitated” Milan players. Colombian Carlos Bacca, scorer of Milan’s first half equaliser, was especially “vehement” in his protests to referee Massa whilst the Milan players are alleged to have done some damage to their dressing room and environs. Bacca, in particular, will be anxiously awaiting possible sanctions today from the Federation’s disciplinary committee.

Things were a deal brighter on the other side of Milan city last weekend when Inter produced arguably one of their best performances in a fragmented season when beating Atalanta 7-1 at San Siro. In a normal season, such a result against a local rival would seem a bit excessive. In this season, in which the Gian Piero Gasperini coached Atalanta went into Sunday’s game in fifth place, actually one point ahead of Inter, this result was stratospheric.

When Inter’s coach, Stefano Pioli, suggests that his team could yet win themselves a Champions League berth (they are now fourth), people might start to take him seriously. The Champions League situation more and more looks like a tight three way battle for two places, involving AS Roma, Napoli and Inter and with the final outcome very much in the balance.

Final thought. Napoli showed that, notwithstanding their disappointing Champions League exit at the hands of Real Madrid last week, (beaten 6-2 on agregate) there is still life in this not so old dog. Their 3-0 defeat of little Crotone did not in itself mean a lot but it means that they are still bang in there in Champions League. Now third, just two points behind second placed Roma (3-0 away winners against Palermo) and six ahead of fourth-placed Inter, the Neapolitan season is far from over.